A Selection of Qing Imperial Porcelain

S otheby’s Hong Kong is pleased to present a selection of Qing dynasty imperial porcelains, 23 works that highlight a range of styles – from the gentle refinements in an age of elegance to the vivid synthesis of traditional Chinese elements with Western techniques. A diverse range of wares was produced during the most prosperous periods of the Qing dynasty, and the many innovations across various imperial reigns offer unique insight on the temperaments and aesthetic preferences of the Qing rulers. Often the themes reveal a deep respect for traditional art and the study of literary classics. From an extremely rare Yixing Jun-imitation ‘peach’ waterdropper from the Yongzheng period to a rare pair of inscribed famille-rose square tea caddies attributed to Tang Ying, the works of art though rarefied are also functional household items, which provide a fascinating glimpse into the workings of everyday imperial life.

The Yongzheng Emperor, having ascended the throne under somewhat nebulous circumstances, was a firm believer in portents of good fortune and more receptive than any other Qing emperor for auspicious symbolism. This peach-shaped waterdropper was suited for the Emperor’s birthday, as the fruit is a classic symbol of immortal life and the longevity inscription represents the kind of wish typically associated with imperial birthday presents.

What’s unusual about this piece is that it is Yixing stoneware, a type not immediately associated with imperial works of art. Its variegated sky-blue glaze suffused with a faint crackle also makes the work exceptional. The glaze is reminiscent of Song dynasty Jun wares, for which Yongzheng Emperor is known to have a fascination and had sent originals from the palace collection to the Jingdezhen kilns to be copied.

Twelve ladies, dressed in sumptuous elaborately adorned, dance together as they play music. The theme on this pair of vases appears to be a reference to Cao Xueqin’s great classic novel Dream of the Red Chamber, which tells the story of the gradual decline of the aristocratic Jia family. Among the extensive cast of characters are the ‘Twelve Beauties of Jinling’, which have inspired art throughout the ages.

Belt ornaments, thumb rings or other wearable accessories served as more than functional pieces. Often made of precious stone, sometimes made of porcelain, these objects were worn to reflect the social status of the wearer. The material and style of belthooks would vary based on the official rank of the wearer. The practice and the norms would change throughout the centuries.

The luxuriant design exemplifies the innovation of Tang Ying (1682-1756). The rich design of the flowers of the four seasons is elegantly rendered in famille-rose enamels on the larger sides of each flask.

These holy water vases were likely produced as offerings for the altar of a Tibetan Buddhist shrine in the Forbidden City. A vase of this pattern can be seen in a painting by Giuseppe Castiglione showing the Qianlong Emperor seated under a pine tree with a table to his right set with several treasures from his collection. 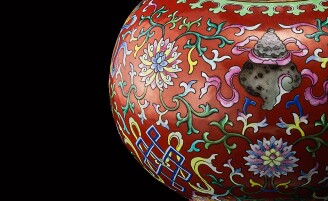