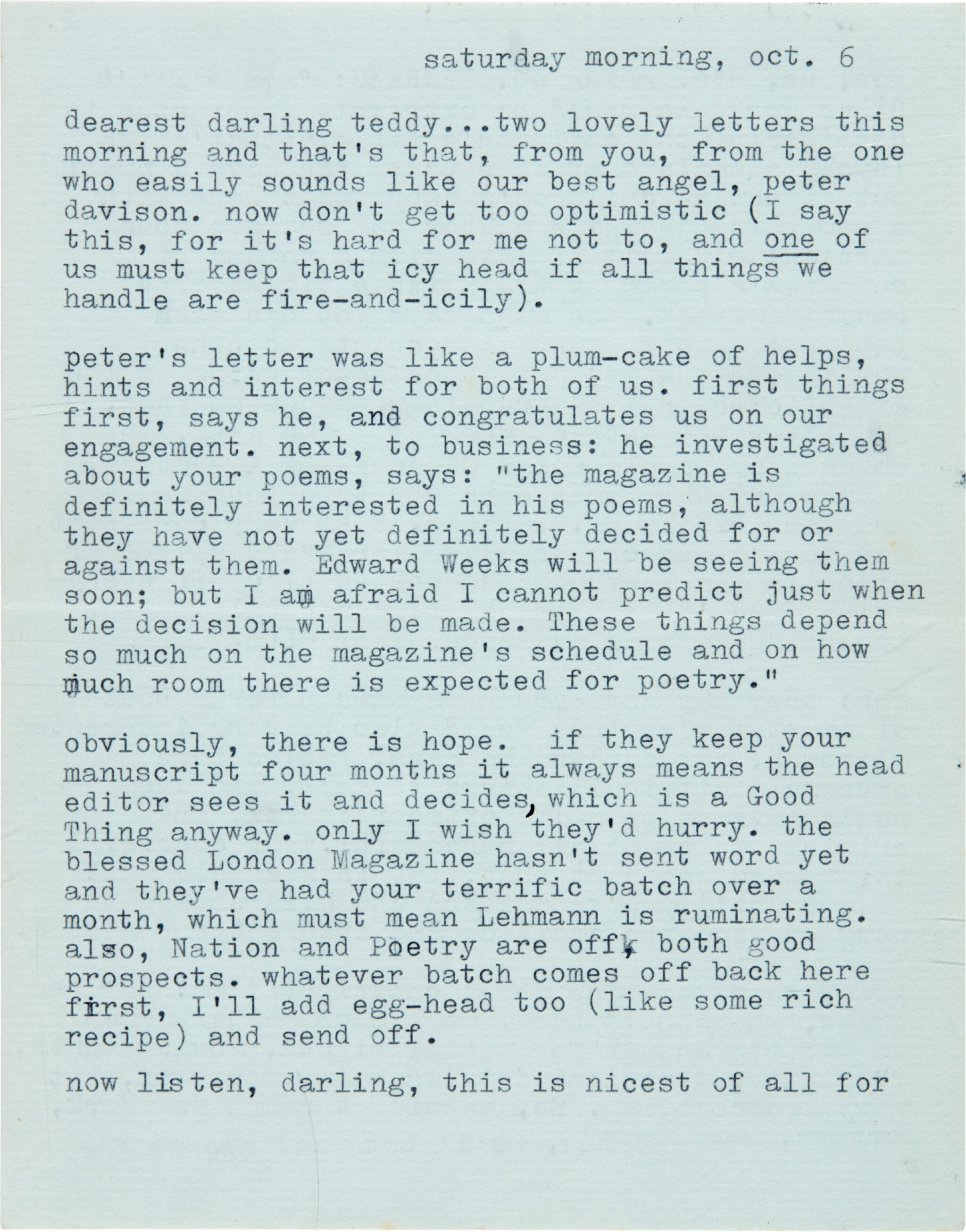 writing with optimism and enthusiasm about their futures as writers, forwarding advice she had received from the poet and editor Peter Davison on Hughes's poetry and his opportunities as a children's writer, with a detailed critique of his poems 'Dolly Topplebull mourns her ascendant Vanity' and 'The Horses of the Sun', as well as her own work ("...I think I'd like to change the title on my book of poems to 'Firesong.' What think you..."), and sending him her poem 'Street Song' ("By a mad miracle I go intact...") in three ten-line stanzas ("...I am enclosing my sentimental one; be strict in criticizing, for you are my one proper lens; even if you know I am blithering on about how I love you, it is a poem, and, as such, can be attacked brutally..."), scattered autograph corrections, 8 pages, 8vo (177 x 140mm), blue writing paper, [Whitstead, Newnham College, Cambridge], 6 October 1956, light ink staining, rust marks from paperclip to final page

"...Darling, be scrupulous and date your letters. When we are old and spent, they will come asking for our letters; and we will have them dove-tail-able..."

SYLVIA PLATH TO TED HUGHES ON THEIR ENWTINED FUTURES AS WRITERS. Enthused by an encouraging letter from Peter Davison, the influential poet and editor, Plath writes to her husband with professionalism and ambition on how to develop their careers: as Hughes later acknowledged, it was Plath's ambition that provided the impetus for his career. Plath had published a great more than Hughes at the time that they met, and this letter shows her familiarity with the publishing world. Atlantic Monthly is still considering Hughes's poems and Harcourt Brace would be "extremely interested in considering the children's fable" but warns that fables for adults are hard to sell. She outlines her plans for agents, competitions, and possible book ideas for Hughes's fables.

This letter also captures the close and sympathetic criticism of each other's work that characterised their early relationship. "I love your poem on the changeling", she says, but advises cutting the final three lines and changing the phrase "hideous eyes" ("...I'd like better something that showed the eyes hideous..."). A second poem, 'Horses of the Sun', is subject to more closely detailed analysis: she warns him about "editorializing" with abstractions and of careless syntax, but also expresses with remarkable clarity what she loves about his poetry, such as his "athletic inwoven metaphor which makes description both realistic, psychologically valid and musical".

Everyday college life has now receded into the background, although Plath talks about her enjoyment of Chaucer. She also returns again to how much she misses Hughes. In his latest letter to her, he had described how a little girl had let out a scream when she had caught sight of him:

"Darling, you're the wildest loveliest piece of flesh walking. If little girls scream, it is only in a king of Bacchic ecstasy; the police are just jealous and want to convict such exceptional Samsonian excellence. I love you so."