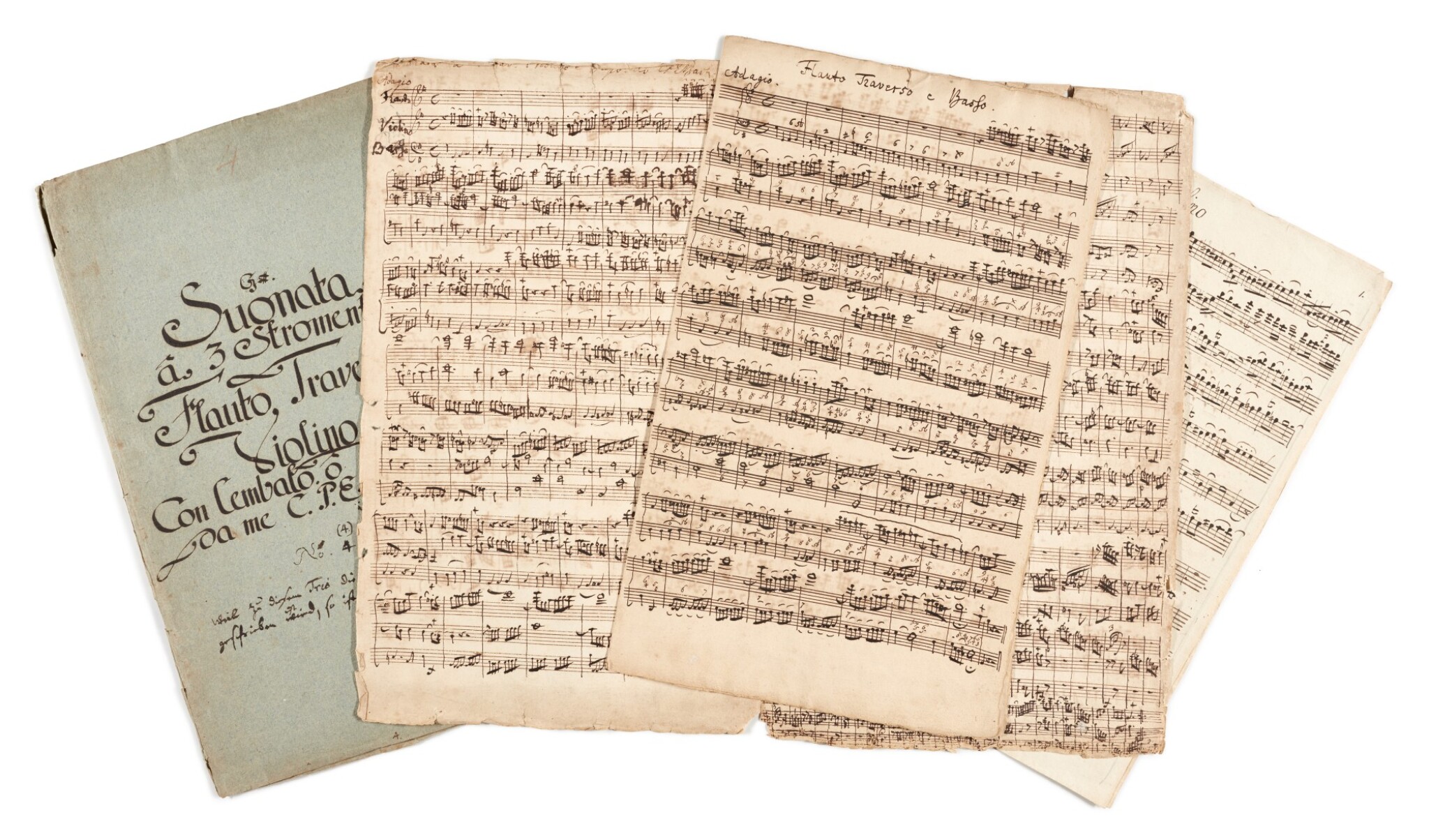 Autograph score and autograph parts of the Trio in G major, for Flute, Violin and Continuo, Wq. 144, THE SCORE SIGNED BY THE COMPOSER ("CPE Bach")

a working manuscript of the complete work in three movements, comprising

1) The autograph full score, with autograph title signed ("Sonata a 1 Flauto, 1 Violino & Basso di CPEBach"), notated in dark ink on between six and eight three-stave systems per page, the Presto completed on three additional hand-drawn staves written in the lower margin, the first page annotated by Bach in his final years ("...Violin…Bass"), 4 pages, 4to (35.5 x 21.5cm), 21 hand-drawn staves, watermark: narrow coronet with four pinnacles, no place or date [1747], a little paper-loss through oxidization of the ink, affecting some notes and at the edges, some creasing and curling of the paper, partially concealing the title inscription, otherwise in good condition

2) The autograph parts for flute and continuo, in score, with autograph title ("Flauto Traverso e Basso"), with figuring, notated in brown ink on between eight and nine two-stave systems per page, the conclusion of the sonata written on an added ninth stave in the lower margin, 4 pages, 4to (34.5 x 20.5cm), 16 hand-drawn staves, with watermark of a coronet, no place or date [1747]

Autograph manuscripts by members of the Bach family are of the utmost rarity. While letters by Emanuel Bach appear with some frequency at auction, autograph music is seldom offered for sale.

This is a new and unrecorded source for one of C. P. E. Bach’s compositions, written first in Leipzig in 1731, and revised in Berlin in 1747, according to the composer’s Nachlassverzeichniss (Trio no. 4). It is a work written at the very beginning of Emanuel’s composing career and within the lifetime of his father, Johann Sebastian Bach. Its composition was almost certainly supervised by the elder Bach and it may have been performed in a private concert or informal family musical gathering in the Bach apartment, within the Thomasschule, Leipzig. It could also have been heard at the Collegium Musicum concerts in Leipzig, which were directed by Johann Sebastian Bach.

Emanuel was seventeen years old when this trio was first drafted. This manuscript evidently presents the revised form of the composition, dating from 1747, when C. P. E. Bach was working at the court of Frederick the Great, in Berlin and Potsdam. There were several notable flautists working in Berlin, including the virtuoso and theorist Johann Joachim Quantz, but more importantly the king himself, who was an enthusiastic and quixotic flute player, as well as composer of many works for flute, including concertos, sonatas and other chamber works and exercises. C. P. E. Bach may have revived this trio for performance at court by his royal patron. 1747 was also the year that Johann Sebastian made his famous visit to Berlin to perform before Frederick, Das musikalische Opfer, BWV 1079, being the result, which contains the ne plus ultra of all trio sonatas.

The only surviving early part of the manuscript is the manuscript wrapper, whose title is in the hand of a copyist found in music written by Emanuel during his years as a student in Frankfurt an der Oder. This suggests that it was also performed in the university city by Emanuel and his student colleagues. This title is annotated by Emanuel much later in life, probably from his years in Hamburg, between 1768-1788.

The separate violin part is later than the score and the flute and basso continuo and is written in the hand of a copyist working in Hamburg in the last decade of Emanuel Bach’s life. This suggests that the manuscript was used throughout the composer’s life, the re-copied manuscript replacing a lost or defective part. 1) and 2) can be dated to 1747, during Emanuel’s Berlin years.

The Trio Sonata is a somewhat old-fashioned form. After writing a dozen or so of these works in his early years, most revised during his Berlin period, Emanuel virtually abandoned the form in later life.

This manuscript has not been used for the score in Carl Philipp Emanuel Bach: The Complete Works, II/2.1.

Sotheby’s is grateful to Dr. Stephen Roe in the preparation of this catalogue entry.