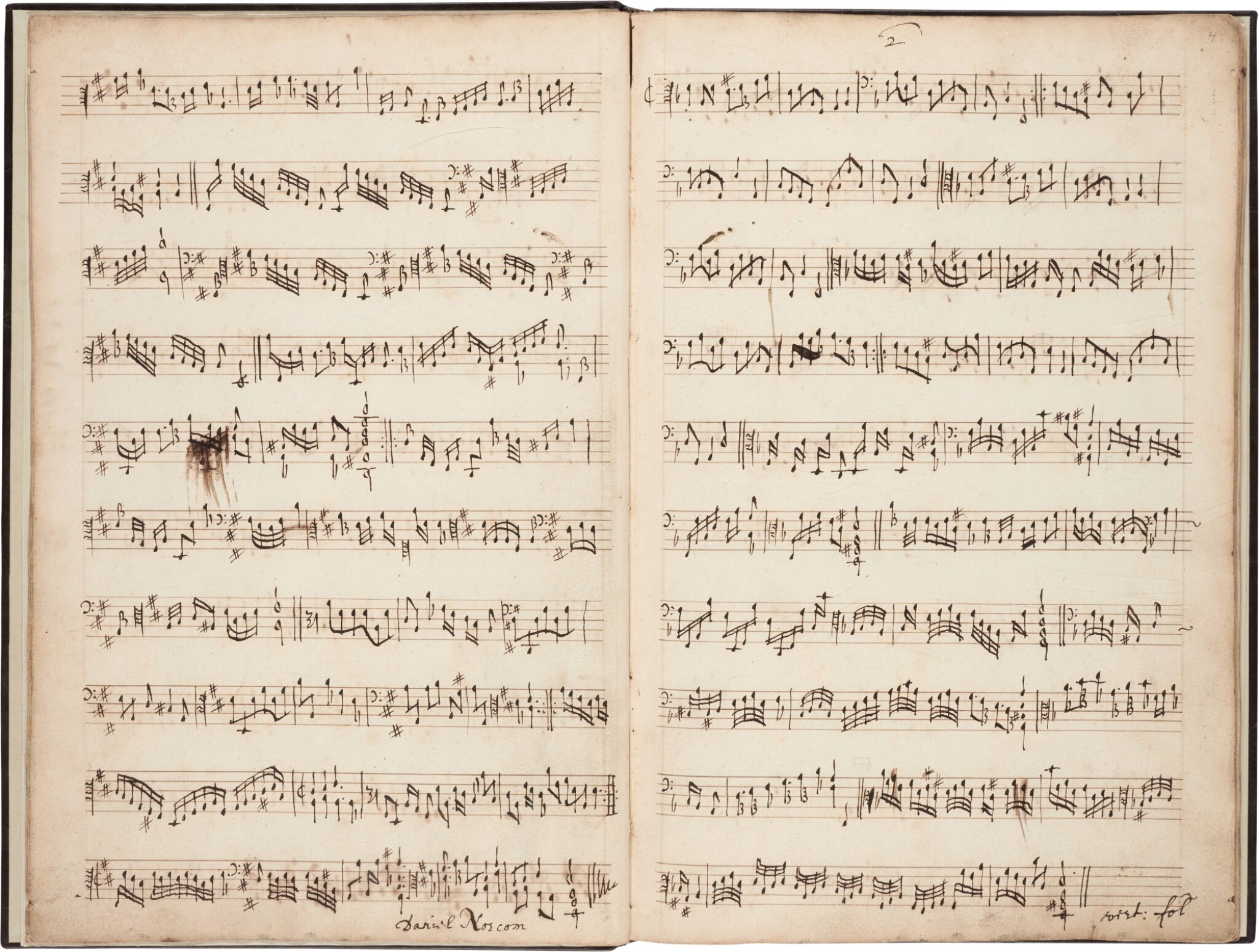 Important c.mid-seventeenth-century manuscript of divisions for solo bass viol by Daniel Norcombe, Christopher Simpson and others, also including a later collection of English songs and poems from around the 1680s

the bass viol music occupying folios 1-33 and comprising 17 sets of divisions by Norcombe (numbered 1-6, 10-11, 15-16, 18-[20], [22], [26-28]), the composer's name variously indicated ("Daniel Norcom"; "Nor"; "D: Norcomb"; "Dan: Norcom"; "Mr Daniell Norcombe"; "D: N:" etc.), 3 sets of divisions by Simpson (numbered 7, 9 and 21), his name variously indicated ("Mr Simpson"; "C Simpson" and "C: S:"), and 16 unattributed sets, three of which identified by a later hand as by William Young (nos.[29]-[31]), another three of which simply entitled by the scribe "Preludium" (no. [8]), "Ffantazia" (no.12) and "Pole Wheele" (no.[25]), and one of which on "Tregian's Ground" (no. [13]: later manuscript identification), notated in staff notation on up to ten single-stave systems per page by apparently one scribe; the English songs and poems added from the reverse end on fols.34-48, in apparently the same hand as that of the bass viol music, comprising over 20 items, many with highly political, Royalist-inspired, texts ("...let buggering Oates be damned...and let us be merry, since Kg James & Queen Mary are comd to ye Crown..."), some songs provided with just the melody, others with the melody and bass together, one song containing at the end the inscription "hic precor JCW [?]", the concluding verses of the last song tipped in before fol.1

SEVENTEENTH-CENTURY MANUSCRIPT MUSIC FOR THE BASS VIOL IS OF GREAT RARITY AT AUCTION.

THE PRESENT VOLUME IS A MAJOR SOURCE FOR THE BASS VIOL REPERTORY AND MANY WORKS CONTAINED HERE - OVER HALF THE TOTAL - ARE NOT FOUND IN ANY OTHER SOURCE.

WE UNDERSTAND THAT THE MANUSCRIPT HAS NOT BEEN WIDELY STUDIED OR PUBLISHED IN ITS ENTIRETY.

In addition to the recorder and the lute, the instrument most associated with Arnold Dolmetsch was the viol, the golden age of whose family of instruments was the latter part of the C16th and the early part of the C17th (from the mid C17th the bass instrument of this family was the one most commonly played, and after this time the Italian term for the viol, 'viola da gamba', gradually took on its modern specific meaning of bass viol). Following his 'startling discovery' of a repertory of English concerted music for viols in the Royal College of Music library and in the British Museum, supposedly in 1889, Dolmetsch was the first person to assemble a viol consort for the performance of sixteenth- and seventeenth-century consort music - a key date in the developing British early music movement being the public debut of Dolmetsch's consort, at the Princes Hall, London, on 27 April 1891, at which his thirteen-year-old daughter Hélène played divisions by Simpson on the viola da gamba.

The present remarkable manuscript was acquired by Dolmetsch some years later, in 1898, as a note by him on the front pastedown reveals. The repertory it contains dates from after the viol's golden age, and may have been acquired, according to Andrew Ashbee, around the 1650s. The named composers represented in the volume are some of the seventeenth-century's most important performer-composers associated with the bass viol, namely Christopher Simpson (c.1602-6 to 1669), Daniel Norcombe (?1576-1653), and William Young (died 1662).

Simpson, represented here by three pieces, was the most important English writer on music of his day, and one of the most eminent viola da gamba players. All of his surviving works are for various combinations of viols, or for solo viol, with only a few being printed in his lifetime, excepting those which appeared as examples in his books - chief among these being The Division-Violist, or An Introduction to the Playing upon a Ground of 1659, for which he is best known (the second edition, of 1665, entitled Chelys minuritionum artificio exornata/The Division-viol, or The Art of Playing Extempore upon a Ground, was a very influential publication and remained in print in various editions - for one of these, see lot 000 - for sixty years after Simpson's death). The iconic illustration of a viol player in The Division Viol is very probably of Simpson himself. The three pieces by him which are preserved in the present manuscript are preserved as well in up to six other sources, including in The Royal College of Music, London, the Bodleian Library, Oxford, the Stadt- und Universitätsbibliothek, Frankfurt, and the Morgan Library, New York.

Daniel Norcombe, the composer of some 35 sets of divisions for viol, was lutenist to Christian IV of Denmark between 1599-1601, and from 1602 until his death a viol player for the Archduke Albert in Brussels. Most of his viol divisions are on various (cantus-firmus-like) grounds, although some are dances; they are typically formed of two strains, with the first moving away from the tonic, and with a single division (or variation) following each strain. Norcombe's attractive output for viol was not published in his lifetime, around half of it being preserved in the Dolmetsch manuscript. For 11 of the pieces transmitted here (nos. 11, [10], 15, [16], 5, 18, 20, [22], [26], [27], [28]) the manuscript is the unique source.

A third identifiable composer represented in the manuscript, William Young, was active on the continent and regarded in his day as one of the finest viol players in Europe. Concordances have been found elsewhere for all of the pieces so far identified as being by him here (nos.[29]-[31]).

Sotheby's is grateful to Dr. Andrew Ashbee for making available a draft article on the manuscript, and in particular, for clarifying details of its chronology.