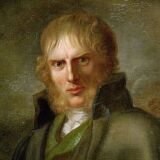 Widely regarded as the father of German Romantic painting, Caspar David Friedrich (1774-1840) was born in the harbour-town of Greifswald in Pomerania on the Baltic coast. He was the son of a candle-maker and soap-boiler, and the sixth of ten children. Friedrich was no stranger to tragedy: his mother died in 1781 when Friedrich was only seven years old, and his sister Elisabeth died the following year. In 1787 Friedrich witnessed his younger brother Johann Christoffer drown, and in 1791 his sister Maria contracted Typhus and died. These experiences, along with his Protestant upbringing and the stark landscape in which he grew up were to have a profound influence on his painterly aesthetic and the meaning with which he imbued his work.

Friedrich received his early artistic training from a local teacher in Greifswald before moving to the Academy of Copenhagen and then settling in Dresden. He was elected a member of the Berlin Academy in 1810 after two of his paintings were purchased by the Prussian Crown Prince. In 1805, he submitted two works to the Weimar competition organised by the German writer Goethe, which he won.

Friedrich’s popularity waxed and waned over his lifetime; though he gained early renown, this was lost over his later years. In his final fifteen years of life, Friedrich’s reputation went steadily into decline. He was thought to be too eccentric, melancholic and out of touch with the times. Friedrich died in Dresden in relative obscurity. It was not until the 1970s that his work enjoyed a renaissance. The most damaging blow to his reputation came after the Second World War. The Nazi party drew similarities between Friedrich’s work and their nationalistic slogan Blut und Boden and used his work to promote their ideology. After Germany’s defeat, Friedrich’s work remained tarred by association.

Friedrich was greatly influenced by the German Romantic writers and critics such as Novalis, the Schlegel brothers and Tieck. These writers brought a new emotive awareness to nature, and Friedrich sought to replicate this in his art. Much like J.M.W. Turner and John Constable, he portrayed nature as a divine creation which stands in opposition to the artifice of the man-made world. Friedrich himself has influenced many notable artists, including his contemporary Johan Christian Dahl, and the more modern Arnold Böcklin, Ferdinand Hodler, Gerhard Richter and Mark Rothko.

Friedrich wished to paint not just the landscape, but the emotional response which it provokes. Through this, the spectator views an outward representation of an inward sensation. The most radical achievement of Friedrich was his new approach to pure landscape imagery: the landscape became the protagonist, not the human event within it. The human figure is often silhouetted before night skies or morning mists, and barren trees and Gothic or megalithic ruins are common features in his work. When reflecting on the early tragedy of Friedrich’s family life, it comes as no surprise that gloom and melancholy pervade his work.

Nevertheless, after wedding Caroline Bommer in 1818 (with whom he had three children), Friedrich’s paintings saw use of a brighter and less austere palette and conveyed a sense of levity. Frequency of human presence in these paintings also increased considerably during this period, which perhaps reveals the new importance of human life experienced by Friedrich after starting his family. However, even in Friedrich’s most sombre works, he points to a more peaceful life beyond human mortality. Friedrich was raised in a Lutheran family, and his religious views surface in his work in this way. The consolation of a harmonious afterlife is present amidst the despondency.