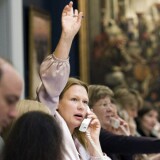 Tessa Kostrzewa joined Sotheby’s in 1998 as a Graduate Trainee. In her career at Sotheby’s she has worked in the Russian, Jewelry and Impressionist & Modern Art departments, and as a specialist in the European Paintings department. Her areas of expertise include 19th and early 20th century German, Austrian, Dutch, Belgian and French paintings, as well as 19th, 20th century and contemporary Greek, and Central and Eastern European paintings.

Tessa pioneered Sotheby’s Greek Sales with Constantine Frangos between 2000 and 2010, and has been instrumental in creating an international platform for selling Central and eastern European paintings. She was the driving force behind the hugely successful Hascoe single owner sale of Modern Czech Art in London in June 2011, which set new world records for multiple artists, and the single owner sale of the Cullen Collection of Czech Surrealist Art in 2014. She is Head of Sale of Sotheby’s annual 20th Century Art – A Different Perspective auction, and furthermore co-curates the 19th Century European Paintings sales, as well as being jointly responsible for appraisals, art search, catalogue production, client liaison and private treaty sales of the European Paintings department.

Tessa gained a Bachelor of Arts in Modern Languages from King’s College and a Master of Arts in History of Art from the Courtauld Institute, London. She is fluent in English, German and French.