Women of the Avant-Garde

T he upcoming Russian Pictures sale at Sotheby's in London on 28 November will include an important collection of fourteen works by Alexandra Exter, a key figure of the early 20th century Russian avant-garde. This period in Russian art history is unusual for the number of high-profile female artists it produced. Far from being side-lined, as was the case for many of their European counterparts, these women not only played a key role in supporting the burgeoning careers of their fellow artists, but themselves made a significant contribution to the advancement of the visual arts in both Russia and the West.

ALEXANDRA EXTER IN FRONT OF PAINTINGS BY UDALTSOVA IN AN EXHIBITION AT THE STORE, MOSCOW, 1916.

Throughout the 18th and 19th centuries women of the upper-classes played an important, but passive, role in the arts as sponsors, patrons and salonnières. Even in the early 20th century women such as Katherine Dreier whose attempts to develop their artistic talents were frustrated often turned to patronage as a means of contributing to the development of the arts. In the 1910s Alexandra Exter’s studio in Kiev was the centre of the city’s artistic life and the flourishing avant-garde scene there. She was a Gertrude Stein-like figure bringing people together and encouraging and supporting young artists, poets and writers, but she herself was also one of the most important artists of the Russian avant-garde along with Natalia Goncharova, Liubov Popova, Varvara Stepanova, Olga Rozanova and Nadezhda Udaltsova.

Upper-class Russian women had always enjoyed different freedoms from those in Europe; although they were the property by law of their parents and later husbands, they had the right to own property and pay taxes, and could therefore vote (by proxy). The lot of the working class woman was very different, but the development of late 19th century Russian society followed a different trajectory from society in the West because the industrial revolution and societal transformations were condensed into a few short decades following the social reforms of Alexander II and the emancipation of the serfs in 1861. The accelerated transition of the economy from feudal to capitalist meant that women entered the urban workforce at an accelerated rate. They still had very little political freedom but they had more economic freedom, professional opportunities were far greater than in the West and they had access to higher education. At the top level of society the numbers of women enrolled at university and members of the professional classes were significant.

The 'woman question' had been at the forefront of radical debate from the 1860s and feminism and radicalism were closely associated. International Women's Day was declared a new socialist holiday in 1910 and the spark that lit the flames of the first March Revolution in 1917 was the International Women's Day march. The iconoclasm of the avant-garde movement in Russia included the welcoming of female members on equal terms. At each of the seminal avant-garde exhibitions held in Russia in the 1910s female participation was around the 50% mark: three out of five at 5 x 5; five out of eleven at Tramway V; seven out of fourteen at 0,10. As an illustration of the uniqueness of Russian women's position in the avant-garde Exter and Olga Rozanova both participated at the First Free Italian Futurist exhibition held in Rome in 1914 and were the only women to do so. Exter was one of fifteen women to represent the Soviet Union at the new nation’s first participation in the Venice Biennale in 1924.

The ideal of equal marriage had been popular in educated circles from the time of the social reforms of the 1860s and many of the women of the Russian avant-garde were either married to fellow artists or had particularly supportive husbands who were happy to take a back seat. Exter's first husband, the lawyer Nikolai Exter, was one such man; he only baulked at Exter's behaviour when she travelled to Italy to visit the hometown of Ardengo Soffici, her Italian Futurist lover. The subject of the female nude had never been a stalwart of academic art as it had been in Europe which was one less obstacle for these women (although Natalia Goncharova had been prosecuted as a student for painting female nudes). And stylistically the abstraction of Cubo-Futurism, Suprematism and Constructivism was gender-neutral.

In late 19th century Russia the revival of traditional handicrafts was part and parcel of the Russophile movement and was encouraged as a means of protecting many of the newly emancipated rural peasants from being left behind while industrial progress steamed ahead in the cities. This was a field in which women were hugely active both as artisans and as directors of workshops. The influence of folk art gave rise to Russian neo-primitivism in the early 1900s. Exter and her band of 'folk futurists' which included Popova, Rozanova and Udaltsova all produced useful decorated goods to help the war effort on behalf of the Kiev Handicraft Society. (see L.Engelstein, Russia's Modern Women, Amazons of the Avant-Garde, p.70, 2000). Ukraine was particularly celebrated for its decorative and applied arts and this tradition was to have a profound influence on Exter particularly in her use of bright primary colours, even when those around her were restricting their palettes to sombre Cubist browns, Still Life with Candelabra is a case in point. Exter and her fellow Ukrainian Sonia Delaunay were hugely influential in injecting colour into modern design in Paris and all the defining characteristics of this type of art are visible in their work: the love of symmetry, inherent rhythm and motion, superfluous decorative elements for the sheer joy of decoration. The decorative border of Dancing Nudes directly references the appliqué fabric motifs of traditional kilims and textiles.

Female artists have historically excelled outside of the strict confines of the male-dominated world of fine art, so when easel painting was rejected by the Constructivists as 'bourgeois' female artists found themselves ushered in to the new order, their skills recognised and required to serve the needs of the Revolution. The applied arts had previously been dismissed as feminine but were now celebrated as a way of integrating the arts into everyday life and for their usefulness as a propaganda tool to reach the masses. Almost all of these artists produced fabric and fashion designs and Exter in particular excelled at stage and costume design. In Paris in the 1930s she turned her talents to book illustration as a way of supporting herself and worked for the French publishing house Flammarion, Quatrains d'Omar Khayyam is a beautiful example of the hand-illustrated manuscripts that she was producing at this time.

Although women participated in French Surrealism, German Expressionism, the Russian avant-garde was the only art movement which admitted women to its ranks as equals, even if they did meet with obstacles the men did not. What is particularly unusual about those artists who emigrated, Sonia Delaunay, Natalia Goncharova and Exter, is that they were also accepted as equals by their Western counterparts, and made a name for themselves in the particularly masculine movements of Cubism, Futurism and Purism. Fernand Léger, who knew Exter from her time in Paris before the Revolution, immediately invited her to teach at the Académie Modèrne, the Purist school he founded with Amédée Ozenfant, securing her place as not only an important figure in Russian art, but a key player in the story of Modernism. 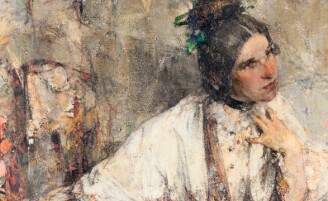