Long seen as bound by convention and outdated ideals of femininity, jewellery presented a fabulous vehicle for liberation and subversion in a time of social and cultural upheaval. With innovative jewels that became powerful modes of expression for a newly wealthy, fashion-conscious generation, famed Parisian house Van Cleef & Arpels proved itself the best at capturing the spirit of the moment.

In our own topsy-turvy times, these pieces’ casual yet assured opulence – their sophisticated combination of informality and preciousness, of unusual colours and sensual fluidity – are exactly what jewellery enthusiasts are looking for.

Adored by the international elite and deluged with royal commissions (including the coronation crown for Queen Farah of Iran in 1967), in the 1960s and 1970s Van Cleef & Arpels found itself at the height of its creative powers and at the epicentre of a new flavour of luxury. Everything came together during these decades: the firm offered exceptional gems, incorporated influences from India, Asia and Africa into daring designs and attracted a roll call of the world’s most glamorous clients: Jacqueline Kennedy Onassis, Maria Callas and the Aga Khan, among others. Richard Burton famously found the stones that best matched Elizabeth Taylor’s intensely violet eyes with the arresting combination of coral and amethysts in the firm’s 1971 “Lamartine” bracelet and earrings.

The house proved so adept at crystallising the essence of the era that the jewels it created then are now prized as masterpieces of late 20th-century design. The stellar selection on offer at Sotheby’s New York this December exemplifies the best of Van Cleef’s style at the time. The more classically elegant “Twist” tornado necklace of coral beads with emerald clasp and the two sensational sautoirs from Betsey Whitney’s collection showcase the house’s vibrant mix of materials and colours – the torsade combines turquoise, coral and amethyst and one sautoir marries deep green chrysoprase with coral. Also featured is one of its most original creations, an inspired interpretation of the abstract modernity of the day. A chain-mail collar of polished gold discs fringed with diamond-shaped pendants, the gold “Sequin” necklace (offered with matching earrings) may well stand for glam at its best, the glitter of its golden disco sequins in perfect sync with Paco Rabanne’s contemporaneous futuristic fashion. It is just, as they would say then, outta sight.

Vivienne Becker is a jewellery historian and a contributing editor of the Financial Times’s How to Spend It. 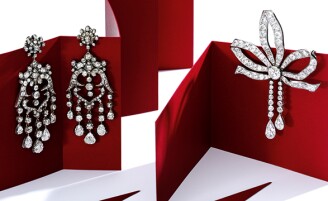