What makes a piece of jewellery iconic? Not many designs can boast this accolade, but the Cartier LOVE bracelet – one of the earliest examples of which features in London's Fine Jewels sale – is easily worthy of this title.

Firstly, it resonates with the era in which it was created – in 1969, New York, when the city was at the height of the hippie movement. Aldo Cipullo, a young Italian designer working for Cartier spotted a moment – and a generation enthralled with the ‘make love, not war’ ethos. Secondly Cipullo realised that this demographic was open to the idea of a new, contemporary love token that owed little to traditional jewellery expressions of the time.

Drawing inspiration from the shackles of a chastity belt he crucially designed the jewel for both men and women (a unisex bracelet was unheard of at the time), and initially insisted they be sold only as a pair. Aesthetically he also steered away from any fussiness, paring back the bracelet to the bare minimum of a simple, flat, yellow gold cuff, punctuated with industrial style screws – in gentle homage to the rivets on the bezel of the Cartier Santos watch. Two of these were functional, fastening the tight-fitting bracelet to the recipient’s wrist, ‘locking’ the giver and receiver into a jewellery love-contract of sorts. Unable to slip on and off (they are slightly oval to hug the contours of the wrist) nothing would remove the band except a gold screw driver, included in the offering, making the LOVE bracelet a semi-permanent reminder of affection. ‘After all, love symbols should suggest an everlasting quality’, he said at the time.

Today the LOVE bracelet is an important part of the Cartier proposition; some are now studded with diamonds and the range has extended to include rings, necklaces and earrings. But nothing quite beats the simple perfection of the original, a lasting legacy of one man’s ability to capture the zeitgeist and render it in gold.

Other Highlights from Cartier in London Fine Jewels and Geneva Fine Jewels: 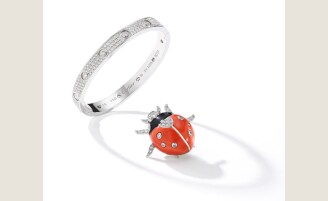 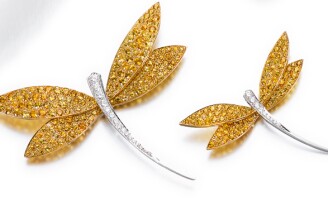