By Sotheby's
Ahead of Sotheby's Important Design sale on 28 May, the incredible recent discovery of a sculpted bust by Art Nouveau artist Alphonse Mucha, La Nature, marks an important moment in the history of this master.

I n 1896, Mucha produced his first work for the in-house calendar of the printer Champenois. Zodiac was a beautiful design full of mystic symbols, and after the calendar was bought by Léon Deschamps, it was popularised through his magazine, La Plume. This lithograph is the most famous of the group as it was printed without text to serve as a decorative panel. Mucha’s bust La Nature is clearly inspired by this early work.

Until recently, there were only six known busts of this kind in existence, with this latest rediscovery there are now seven. They are all slightly different, particularly in certain details of the tiara, of the ovoid jewel which crowns each of them, and in the finish of their respective patinas.

"With her enigmatic expression, her closed eyes, focused on an inner world of reverie, the symbolist woman evokes chimeric images haunted by death, witchcraft and the widespread cult of the absorption of hallucinatory drugs."

Philippe Jullian in his book Esthètes et magiciens from 1969 described in the following words this 'Belle Dame sans merci', the archetype of end of the century womanhood:

"With her enigmatic expression, her closed eyes, focused on an inner world of reverie, the symbolist woman evokes chimeric images haunted by death, witchcraft and the widespread cult of the absorption of hallucinatory drugs."

"The Art Nouveau woman, as for her, only offered a pale reflection of this theme in the end. The femme fatale was done away with: she was replaced by a disheveled enchantress. Woman’s new role fell to allegory. Although always symbolist, she now personified ideals such as Justice, Faith, Truth or Progress. Indeed, she can be seen brandishing a torch as the embodiment of Progress as she transforms into the Electricity Fairy."

This emblematic bust could not be better described. Indeed, some of the different examples listed below seem to originally have had a light bulb at the place of the tiara’s stone ornament. Our example still has a part of the original socket it held. This explains the hole situated on the back of the bust which appears on the three casts sold by Sotheby’s and on the one in the Neess collection (see below). Thus, this major work symbolized in 1900 not only ‘the invention of the incandescent lamp’ but ‘by extension, the triumph of science’.

La Nature was exhibited for the first time in the Austrian section of the 1900 World Exhibition and reproduced in the official catalogue. Strangely, it seems to have sparked scarcely any comment during the event.

At the beginning of the 1960s, only the bust made in 1901 for the décor of the Fouquet jewel shop was generally known. The shop was closed in 1920 and the building was purchased by the Musée des Arts Décoratifs. The 1901 bust is kept today at the Musée Carnavalet. Its silhouette is close to the La Nature bust but has a more ethereal impression.

At this time, Mucha’s sculptures were almost unknown and were for the most part their whereabouts wasn't public knowledge. It was not until 1965 that La Nature was discovered and talked about again. This example was purchased by the collectors Sydney and Francis Lewis who gave it to the Virginia Museum of Fine Arts in 1985 where it is still kept today.

In 1971, Sotheby’s Belgravia in London sold a second version of La Nature with an ornament and earrings in malachite. Today, it is part of the Gillion Crowet collection, and exhibited at the Musée Fin de Siècle in Brussels.


Around 1972, the collector and dealer Ferdinand Wolfgang Neess purchased a third example of La Nature in Paris, which is today kept at the Badisches Landes Museum in Karlsruhe. At the beginning of the 1970s Ferdinand Wolfgang Neess had also purchased another version of La Nature, the only example to have both earrings in the form of a pearl and rose circle similar to the bronze model exhibited in 1900. It also has a two-toned patina and a lapis-lazuli ornament on the tiara. It will be presented in the Neess Collection at the Wiesbaden Museum from the end of June 2019.

On June 17 1988, Sotheby’s London presented another bust in a mat patina bought by the Art Nouveau dealer and collector Victor Arwas who very probably sold it to a Japanese collector. To our knowledge, this version is part of the Sakai Government collection, Japan.

On December 6, 2002, at Sotheby’s New York, a new example of La Nature was presented for auction. It established a world record for a bronze work by Mucha, attaining $807,000. Rediscovered only recently, our bronze was purchased at the end of the 1990s in Paris before being sold and kept in a private European collection until today. It is the only example, together with two others known listed above, to be in a private collection. 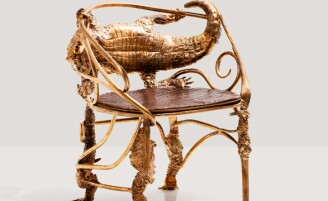