The Paintings of Jean Cocteau: an Interview with Carole Weisweiller

Patrick Martin: Thank you Carole Weisweiller, for coming to Sotheby's to see these nine Cocteau paintings from the estate of Édouard Dermit that are coming up at auction at the end of June. Carole, you were one of Cocteau's closest friends, your mother was also his great friend and the owner of the Santo Sospir house in Saint-Jean-Cap-Ferrat. And you were lucky enough to witness, in that house, the beginnings of Jean Cocteau as a painter: you told me that he used the orchid greenhouse that your mother had transformed into a studio. And it was there that you saw him painting?

Carole Weisweiller: Yes, I watched him paint. He started painting with oils very late: although he had been drawing since his childhood and had done thousands of drawings, his oil paintings are very rare. There can only be very few paintings such as these. He made thousands of drawings but there must only be between 15 and 30 oil paintings, since he threw himself into it in the last years of his life, when he met my mother in 1950, during the filming of Les Enfants Terribles - that's how my mother met Jean Cocteau - and he died in 1963, but in 13 years, it's crazy how much he was able to do!

Watch the video of the interview here:

An Interview with Carole Weisweiller

Carole Weisweiller on the Paintings of Jean Cocteau

[Looking at the paintings:] And you see on these walls these magnificent portraits, some were done at Cap-Ferrat and others surely at Milly-la-Forêt. He would spend six months with my mother and six months in Milly. In the winter he spent a lot of time in his country house: in Paris he could not paint large canvases such as these; they are much too large for the walls of the rue Montpensier.

PM: And these paintings, did you know them?

PM: They were stored in the house in Milly.

CW: I recognize those two [Portrait d’une tragédienne and Phèdre et Œnone], that one [La Tentation du Christ sur la montagne], that one too [Ulysse et les Sirènes], but those [the series of astrologers], which are not oils, I don't remember him painting them in Santo Sospir, he must have painted them in Milly-la-Forêt, I don't even really remember because they weren't hung in Santo Sospir. There was never any question of hanging the paintings over the frescoes; my mother had many, many drawings and so did I, but no oil paintings.

PM: At the Jean Cocteau Museum in Menton, there are many works by Cocteau, but very few paintings. There are very few in Milly, and at the Centre Pompidou, there is only one: Le sommeil hollywoodien, which is one of his most beautiful paintings.

CW: Don't forget that before these paintings, Cocteau had painted frescoes. The first really important frescoes were those of the Villa Santo Sospir, done before the ones for the chapel of Villefranche, followed by those in the wedding hall of the town hall of Menton, and the decor he did in Saint-Blaise-des-Simples, the chapel of Milly-la-Forêt. But he had never really used oil paint before. I don't remember exactly who brought him his box of paint, I think it was Jean Marais. And Marais, Cocteau and Dermit all had their easels. And my mother too began painting in this new greenhouse studio.

PM: In the extraordinary landscape of Santo Sospir, that view that you have from your house with the lighthouse ...

CW: Yes, but there's not really any view from the workshop, it's from the terrace of the house that we have an extraordinary view of the whole bay of Villefranche. In regards to the frescoes, I remember he always said that the villa was a "tattooed house", he always used the word "tattooed". PM: And in fact, you also wrote a book, Les Murs tatoués. And so in the studio, it was a sort of wonderful disarray where everyone would get together, have dinner, it must have been fantastic. And they all took up painting! I remember a portrait of your mother, done by Édouard Dermit or Jean Marais.

CW: It must have been by Édouard Dermit. In the studio, there was a big wooden table where Jean would write - although he would also write in his bedroom - and the three easels: each one standing there in front of their canvas, I can see them all as if I was still there. For Cocteau, oil painting was, I believe, a breath of fresh air: he loved oil painting, which for him was a sort of wonderful distraction, something new, but it must be pointed out that Cocteau always said that he was a poet first and foremost and that the line was poetry knotted in a different way.

PM: That is a beautiful way of putting it. You were very young at the time, what was your relationship with Cocteau? I know that he used to write to you.

CW: I always called him "Monsieur Cocteau," because when I met him I was a little girl. He died when I was 21. So that's my entire childhood and adolescence. I considered him to be a second father and I think he considered me as his daughter as well. And yes, he wrote me stories, very funny children's stories that no one else has ever read - I have been thinking of sharing them, publishing them.

PM: You really should. Coming back to his graphic work, how do you explain this vocation for painting that came late in life?

CW: I think he was frightened. He was almost born drawing, if I may say so, but oil painting was something quite different. I think this painting [Portrait d’une tragédienne] is one of his first paintings.

PM: In Le Passé défini, Cocteau says he was inspired for this painting by the paintings of Michelangelo and his figures... In his diary there is also a sketch of La Tentation du Christ sur la montagne with all those triangles, which evoke the Holy Trinity. In regards to this fear, perhaps it goes back to his childhood? The suicide of his father who also painted? The immensity of Picasso's genius?

CW: He always said "I am a poet and the line is the poetry that is written", for him, drawing is always poetry: when asked why he drew, he answered "I have always been a poet and poetry can be expressed in different ways". In oil painting, there was a whole technique that he was unfamiliar with and that he only learned much later, it's true, around 1950-1951. It is also true that he admired Picasso enormously.

CW: (while looking at Portrait d’une tragédienne ) ... It's really wonderful, it's one of the most beautiful paintings by Cocteau, absolutely fascinating!

CW: And we went to Picasso’s house a lot, they were family.

PM: A family of which there are a lot of photos. I remember a picture where you are at a bullfight in Nîmes with Cocteau, Picasso, Jacqueline Picasso, your mother: you must have been 15 years old, it must have been wonderful to be part of all that, to be with both Picasso and Cocteau. What was their relationship, did they talk about painting?

PM: I can see that you are moved, Carol, and I understand that.

CW: Yes, it's a whole part of my life and my youth. And when I see these paintings, I have the impression that it was just yesterday, time has gone by so quickly and Jean Cocteau was, for me, an extraordinary person. He had an aptitude for love, to love the other, and since Cocteau's death, I haven't come across that very often: someone who lets you participate in his work - obviously when he was writing, I wasn't there - but when he was painting, when he was drawing, one could be there. Unfortunately, I didn't see him painting the frescoes at the Villa Santo Sospir because I was at school in Paris at the time, but I saw him in Villefranche and I even helped him from time to time, I would hold his pencils, the ladder and so on. He even did my portrait on one of the walls.

PM: Your portrait is there, on the right wall of the chapel of Villefranche... so, you wrote a very beautiful book, Les Années Francine on this extraordinary period of the Riviera, Saint-Jean-Cap-Ferrat, the South of France, which covers the years 1950/1960 with an incredible number of photographs of all these moments you have told us about.

CW: I've done three books on Cocteau, a book of recollections which is called Je l’appelais Monsieur Cocteau, then this large book Les années Francine which is full of photographs and finally, a book of all of Cocteau's frescoes that I titled Les murs tatoués.

PM: What does it evoke for you, seeing all these works together?

CW: These are works by Jean Cocteau that are almost unknown, people don't know them, we all know Cocteau's drawings, but these paintings... I am moved because Cocteau's works are so much a part of my life. Cocteau said that not only did he put paintings on the walls, but that he also put his heart into them, and when I see these paintings that I knew, once again I feel as though I am back in the presence of the poet. 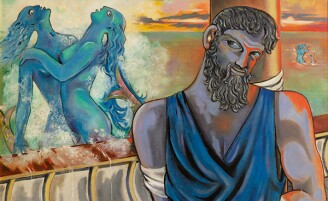