The Incredible Creative Energy of Soulages

T his major canvas from the early 1960s, Peinture 162 x 130 cm, 14 Avril 1962, the highlight of the upcoming Contemporary Evening Sale taking place in Paris on 6 June, testifies to an important period of change in Soulages’ career. In this masterpiece, Soulages has given way to a new and definitive tension, form is now linked to colour and matter, adding an innovative and original dimension to the painter’s work. This change in sensibility demonstrates the incredible creative energy that inhabits Soulages.

In the work form is linked to colour and matter, adding an innovative and original dimension to the painter’s work with the relatively static signs of his early years giving way to a new and definitive tension that would continue to grow. This change in sensibility demonstrates the incredible creative energy that inhabits Soulages.

Born into a family of modest means, Pierre Soulages spent his childhood drawing with black ink, as his mother did not have the money to offer him coloured crayons. He was only able to experiment with blue later on, which represented for him the real colour of light. In the 1950s, azure began to dominate his works, literally devouring the canvas in works such as Peinture 195 x 130, 20 juillet 1956, Peinture 195 x 130, 30 octobre 1957,  held respectively in the Milwaukee Art Museum and the National Gallery of Art in Washington, and Peinture 195 x 130 cm, 21 novembre 1959, which reached a world record price at Sotheby’s in June 2013 ($6,651,081). At the end of 1959, Soulages’ palette darkened to a deep black, and blue disappeared from his canvases for the next three years before reappearing in its entire splendour on 14 April 1962, the day he painted Peinture 162 x 130cm, 14 Avril 1962. And, as is often the case in his work, it would seem that this second attempt was to reveal the artist’s full genius.

Peinture 162 x 130cm, 14 Avril 1962 perfectly illustrates the skill with which Soulages structures his voids and planes of colour with nuance, so that the flame emerges where it is least expected. The lapis lazuli reinforces a movement that is as soft as it is poetic and majestic. Black, present here and there in sparse strokes, takes on a whole other meaning. The play on light, architecture and the monumental structure along with the chromatic transparency increase the mystery that hovers over this composition. There is volume, space and time. But also something elusive and enigmatic which seems to come from as far as fire and ice.

The beginning of the 1960s was also a time when Soulages established himself as one of the leaders of his generation of artists, not only in France and in Europe but also in the United States, where he was represented by Sam Kootz, alongside Mark Rothko, Willem de Kooning or Robert Motherwell. His works entered the Phillips Collection in Washington in 1951, the MoMA collection in New York and the collections of Nelson A. Rockefeller, Otto Preminger and Alfred Hitchcock. He was seen as the European spearhead of American Abstract Expressionism.

In Paris, he was represented by the famous Galerie de France. On the occasion of an important exhibition of his work organized by the gallery’s directors Gildo Caputo and Myriam Prévot, the philosopher Jean Genet wrote a text on Soulages’ work from these years which gives an apt description of Peinture 162 x 130cm, 14 Avril 1962 : “And here unknown excavations rise to the surface, submerged colours, as violent earthquakes drag volcanic earth from the bottom of the sea and make them into islands. Thus, the sole repeated movement of brush strokes outlines and reveals what has been lost and sheds light on the rest. (…) The degrees of a buried and disappeared colour resonate then like footsteps in an underground place, and bathe the monumental shadow with a soft and caressing light.”

As Soulages says himself, “the more limited the means, the stronger the expression.” 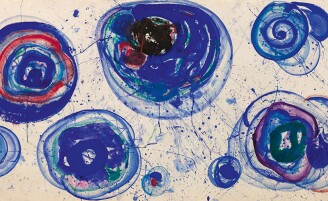