The Fine Art of Russian Porcelain

Russian porcelain has long been favoured amongst collectors of decorative art around the world.  Ahead of Sotheby’s Russian Works of Art, Fabergé & Icons in London on 6 June, Dr Natalia Sipovskaya (Director of the Russian State Institute of Art History and Honorary member of the Russian Academy of Arts) takes a look at some of the key moments in the history of its production and the rise in its popularity among collectors.

Founded in 1744, the Imperial Porcelain Manufactory paved the way for porcelain collecting in Imperial Russia by being the first manufactory in the country to develop its own formula for the coveted material.  The further development of private porcelain companies under the reign of Catherine the Great (1762 – 1796) helped this art form to flourish.

Throughout the following century, interest in porcelain continued to grow, not without the help of Dmitry Grigorovich, secretary at the Imperial Society for the Encouragement of the Arts in St Petersburg.  He helped to establish the Museum of Arts and Crafts in 1870, followed shortly after by the Museum of Porcelain and Silverwork of the High Court, situated inside the Winter Palace.

Following the success of their European counterparts, the All-Russian industrial exhibitions further popularised local crafts in the 1880s and 90s, as well as helped establish the popularity of folkloric themes. The incarnation in porcelain of famous illustrations from the Magic Lantern series, depicting national types in their traditional garb has been especially favoured by the public interested in the depictions of the ‘real’ Russia.

A GROUP OF PORCELAIN FIGURES, GARDNER MANUFACTORY, VERBILKI, CIRCA 1820-1825.

By the beginning of the 20th century, Russian porcelain firmly established itself in prestigious private collections.  The album for the 1904 Historical Exhibition of Works of Art, which enjoyed the patronage of Empress Alexandra Feodorovna amongst other philanthropists, illustrates the variety of objects submitted by the avid collectors of Imperial porcelain, such as Count Sheremetyev, Countess Shuvalova, Prince Yusupov and others.  At the same time private manufactories of Popov, Gardner or the Novi brothers were enjoying a growing following, which often included members of artistic circles and wealthy patrons of the arts. Amongst these enthusiasts were the sculptor Eugene Lanceray, the painter Konstantin Somov and Alexey Morozov, the entrepreneur whose impressive collection laid the foundation for the State Museum of Ceramics in Moscow.

The revolution of 1917 meant that Russian private collections were nationalised and transformed into various museum collections instead. Yet throughout the Soviet period the tradition lived on: devoted individuals helped it carry on in emigree circles, while diplomatic missions introduced Russian porcelain to overseas collections such as Marjorie Post’s, now part of the Hillwood Museum, Washington DC.

After the fall of the Soviet Union, collecting Russian porcelain experienced a strong revival. As the borders and markets opened, both Western and Russian collectors became interested in Russia’s Imperial past and the objects that carry the spirit of that grand epoch. Once again, Russian porcelain took its rightful place as a highly sought after collectible art form, where it firmly remains today.

The appearance at auction on 6th June of a careful selection of diverse works assembled by an American collector is a lucky find for both experienced and new collectors alike.

The Russian Works of Art, Fabergé & Icons is in London on 6 June 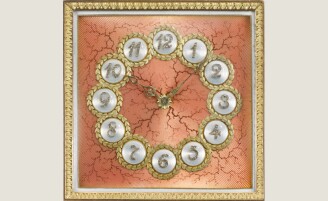