From 1971 until his death in 1987, Andy Warhol invited this roll call of the creative, influential and wealthy to the small estate he bought outside Montauk, a fishing town on the eastern tip of Long Island.
Jointly owned with film director Paul Morrissey, the estate was christened ‘Eothen’, from the ancient Greek for ‘first light’. Bob Colacello, a longtime friend and editor of Warhol’s Interview magazine, remembers his first visit: "It turned out to be an impressive, if understated, compound of five white clapboard houses built in the thirties sitting at the end of a long and winding private road on about twenty acres of unspoiled land directly facing the open sea."

During Warhol’s first summer as owner the main house was rented by Radziwill, who was joined by her sister Jackie Onassis and her children, John John and Caroline. Warhol himself was an occasional resident in one of the cottages, capturing his guests in a series of photographs and films, as did photographer Beard, his close neighbor, and artist Jonas Mekas, who recalled that golden moment as “one of happiness and continuous celebrations of life and friendships"

In her biography Happy Times, Radziwill recalls Warhol’s visits: “Here a somewhat different person was on display. He loved children and was inventive with them, creating activities in which they became totally abandoned such as when he sat them down at a large round table in the living room to show them how to edit a film in a simple way… We spent long lazy afternoons on the beach, talking and burying each other in the sand. At times like this, Andy wasn’t as strange as he initially seemed, but revealed himself as a keen, subtle observer of everything around him…”

Long Island has long been a creative haven, attracting artists from William Merritt Chase and Winslow Homer in the 19th century to Pollock, Krasner, De Kooning, Ernst and André Breton in the 1950s and 1960s. In addition to Warhol’s photos and films from his time there, the setting influenced other work, notably the series Sunset.

Warhol collaborated with the Rolling Stones on a number of occasions – famously designing the band’s famous lips logo and the album cover for Sticky Fingers. In 1975, when they were looking for somewhere to rehearse, they rented ‘Eothen’. Although whether the Stones could enjoy the peace is debatable, as Warhol recounted in his diary: "All the motels were overflowing with groupies. Two girls with no hair and black cats on leashes followed them all the way to Montauk. Mr. Winters - the caretaker of the estate - found them hiding in the bushes!"

Warhol was a regular visitor, finding a particular affinity with Jagger’s daughter: “I love Mick and Bianca, but Jade's more my speed. I taught her how to color and she showed me how to play Monopoly. She was four and I was forty-four. Mick got jealous. He said I was a bad influence because I gave her champagne."
‘Eothen’ was also place for those who worked with Warhol to unwind – “the kids” as he called them. Vincent Fremont, who managed Warhol’s studio for many years and got married on the property in 1977, recalls a more secluded atmosphere: “It was so remote, and interesting, and it was raw. It wasn’t fancy, by any stretch….” It was not all rustic simplicity though – for instance, the beach house runaround was a 1937 Rolls Royce station wagon.

Colacello remembers celebrating Warhol’s 49th birthday there in 1977: “It was just Andy and the kids… We put some old rock ‘n’ roll records on the stereo in the living room… we were all dancing, in quickly shifting couples and groups. Except Andy. He stood on the edge of the room, snapping an occasional Minox, looking a little bored and very lonely. I tried to pull him into our sock hop, but he pulled back and whimpered, 'You know I can't dance, Bob.’”

Montauk still feels remote – as Warhol put it: “The next stop is Lisbon, Portugal” – although it is more of a destination now. ‘Eothen’, however, retains its seclusion. After Warhol's death, his half ownership passed to The Andy Warhol Foundation for the Visual Arts, that later donated a portion of the grounds to the Nature Conservancy, creating the Andy Warhol Preserve in 1993.

To see a selection of works by Andy Warhol in the Hamptons this summer, visit the Sotheby's East Hampton Gallery at 66 Newtown Lane. 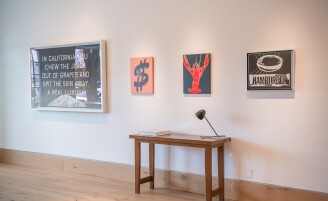