W hile the “golden era” of sneakers when Michael Jordan and the Chicago Bulls had everyone's attention might be the most well-known, the kids that grew up wanting to “be like Mike” in the 1990s are now taking sneaker collecting to entirely new heights. With iconic sneakers like the Nike Air Force 1 being redesigned by Off-White™ founder Virgil Abloh and collaborations with high-energy artists like Travis Scott quickly becoming the new normal, the world of collectible sneakers has expanded well beyond sports.

In this new era of sneaker collecting there are diverse choices and nuanced ways that you can stand out from the crowd with your collection. To help you better curate your sneaker collection, Sotheby’s is revisiting the people, places and stories of the most iconic sneakers ever created.

The iconic Nike Air Force 1 was designed by Bruce Kilgore and was originally released in 1982. Nike’s original plan was to discontinue the shoe and move on to updated variations. However, thanks to enthusiasts and a handful of stores in Baltimore who requested more of the original Air Force 1 with updated accent color variations, Nike eventually obliged, and throughout the 1980s, the Air Force 1 remained in production. In 1993, Nike released the first bold colorways of the Air Force 1, including the “Purple Highs” that utilize some of the finest materials ever used on the early Air Force 1s. The bold colorway kicked off a new way of thinking about color options for the Air Force 1, which began to flood the market in the late 1990s and led to collaborations, limited editions, regional exclusives and thousands of colorways that are still sought after today.

Nike Footwear Designer Tinker Hatfield is one of the most important people in the world of footwear. Tinker has designed countless shoes for Nike, a large majority of the Air Jordan line, and led the team of designers behind Nike’s famous “Innovation Kitchen.” One of the most important of all of Tinker’s designs is the Nike Air Max 1 – the first shoe to feature Nike’s “Visible Air” cushioning. When it was originally designed in 1987 by Hatfield and presented to the Nike team, the marketing department scoffed at the “Visible Air” cushioning, claiming that it would be impossible to sell due to consumers’ fears of popping the exposed bubbles. To the delight of sneaker enthusiasts, this fear was proved wrong and the design inspired by Tinker Hatfield’s visit to The Centre Pompidou in Paris, France began a long lineage of “Nike Air.” The “Air Max Day” Air Max 1, created in 2014 as a celebration of the iconic shoe, was the first shoe to be created for Nike’s now-annual Air Max Day celebration. Only five of these rare, packaged in air, “Air Max Day” Air Max 1s were made. 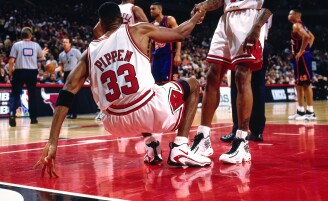 As one of the most talked about artists of today, Kanye West’s creative endeavors are not limited to one focus, but work in unison to drive his success even further. The adidas Yeezy Boost 350 V2 “Carbon” combines one of the most popular designs West has created throughout his partnership with adidas with a unique color palette. The Yeezy 350 V2 is widely regarded as one of the most comfortable sneakers on the market thanks to adidas BOOST cushioning, and this combination of function and aesthetics has resulted in widespread popularity.

There is no better way to celebrate the legacy of the Nike SB version of the Dunk than by combining elements from previously released colorways. In 2007, Senior Footwear Designer James Arizumi combined 31 different colorways to create the “What The Dunk.” Not only was it instantly one of the most sought-after Nikes of the era, but it introduced the entire “What The” concept that has made its way onto countless sneakers since. Arizumi used the iconic elephant print from the Supreme Dunks, the chrome Swoosh from the Diamond Dunks, the embroidered pigeon logo from the famous Pigeon Dunks and so much more. The “What The Dunk” tells the story of Nike SB’s early 2000s success in a game-changing way, making it one of the most important sneakers of the era and beyond. The exact production numbers of the “What The Dunk” have never been released but according to most estimates, just 300 pairs of these collectible sneakers exist.

In 2004, the Nike Air Force 1 was more popular than ever. Nelly had released his hit song “Air Force Ones” at the end of 2002 and it pushed the already iconic sneaker in front of more mainstream audiences. In one of the most viral moments in sneaker history, recording artist Fat Joe licked the bottoms of his sneakers to prove how clean he kept them in an appearance on MTV’s Cribs. Not long after, Nike created a limited number of promotional samples of the Nike Air Force 1 for Fat Joe and his “Terror Squad” record label. The pairs feature Fat Joe’s nickname, Don Cartagena, embroidered into the liner and the Terror Squad logo embroidered into the lower heel. The pink hue embodies the non-traditional colorways that became immensely popular during the era.

Nike Air Jordan 3 Retro “Another One”

DJ Khaled’s popularity skyrocketed after becoming a Snapchat sensation in 2015. For the well-known sneaker collector, a partnership with Nike’s Jordan Brand seemed inevitable. In 2018, DJ Khaled announced two collaborations with Jordan, one for himself, and one for his son Asahd. The former would be named after his famous adlib that can be found on nearly every song he’s produced, “Another One.” Not only are DJ Khaled’s Air Jordan collabs some of the most coveted Air Jordan 3s, but they manage to be what sneakerheads would call, “clean,” while still incorporating details tied to Khaled himself. On the heel of Khaled’s Jordans, his record label and mantra “We The Best” replace the traditional Nike Air and Jumpman logo. The royal blue and “Elephant Print” found on the “Another One” Air Jordan 3 created such a buzz that Jordan Brand created a general release version two years later, cementing the DJ Khaled x Air Jordan 3 as a true collector’s piece.

Few sneakers are as important to hip-hop culture as the all-white Nike Air Force 1. Whether referred to as “white on whites” or “uptowns,” the iconic sneaker has become even more legendary thanks to the likes of Dr. Dre wearing a new pair every single day, and Jay-Z name-dropping the shoe in his lyrics for the past three decades. As Jay-Z grew from a businessman to a business, Nike took notice. To celebrate the first anniversary of Jay-Z’s original Manhattan 40/40 Club location, Nike created incredibly rare promotional samples of the Nike Air Force 1. Helping this exclusive Air Force 1 stand out from the standard versions is the 40/40 Club logo on the heel and the tongue label. A limited number of pairs were given to friends and family, making this unreleased promo sample nearly unattainable for the average consumer, and establishing it as one of the rarest collectible sneakers of the Air Force 1 era. 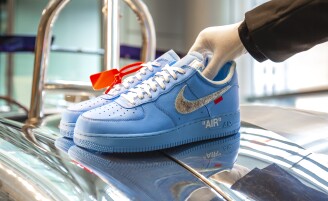 Over the past five years, few designers have been as successful, or as popular, as Virgil Abloh. Abloh’s Off-White fashion house has been partnering with Nike since the summer of 2017, and nearly every collaboration has sold out instantly thanks to Virgil’s creative marketing. To coincide with Virgil’s first solo exhibition at the Museum of Contemporary Art Chicago, Nike and Off-White™ released the limited-edition “University Blue” Air Force 1 exclusively through the MCA. After giving a pair to Serena Williams with the label “For Serena Only” and raffling off an extremely limited number to the public, the Nike Air Force 1 Low Off-White™ MCA University Blue became the most sought-after sneaker of the summer of 2019.

Boston’s Concepts is one of the most respected sneaker boutiques in the world and their connection to Nike SB and the Dunk is as legendary as it gets. Concepts captured the hearts of New Englanders, and sneakerheads, with their 2008 release, the “Red Lobster” Nike Dunk Low Pro SB. The lobster-inspired Dunks were created as an homage to Boston’s most famous fishing export with claw bands around the toe, bib-themed insole and inner liner, and leather upper speckled and colored to mirror the seafood delicacy. Just 200 pairs came packaged with a special condiment box that includes a lobster shell cracker, fork, bib and floating keychain, and it all comes wrapped in the traditional paper bag used by lobster retailers.

When it comes to recent sneaker releases, few will stand the test of time the way the Nike Dunk SB Low “Grateful Dead” will. Released in 2020 in partnership with the band, the Grateful Dead Dunks feature the unmistakable “dancing bears” that first appeared on the back cover of the History of the Grateful Dead, Volume 1 (Bear’s Choice) LP from 1973. The symbol that was originally inspired by an audio engineer nicknamed Bear, was given new life through a faux-fur upper on the Nike Dunk SB. Additionally, the Grateful Dead’s iconic Steal Your Face skull logo is found on the sock liner. While most sneaker releases might not find a demanding consumer outside of enthusiasts, the Nike SB Dunk Low “Grateful Dead” became a cultural phenomenon that found both passionate sneakerheads and life-long “Dead Heads” chasing the limited-edition sneakers.

When it comes to curating your sneaker collection, there are no wrong decisions. Especially with a lineup like this, adding one (or all) of the ten collectible sneakers here would set you apart from the casual sneakerhead.