E xperience the long-lasting influence of Sergei Diaghilev’s Ballets Russes on the arts and fashion of the 20th century with Sotheby's latest webinar. Celebrating fashion, dance and jewelry, hear Carine Roitfeld discuss her inspiration for the costume styling, and her conversation with Tamara Rojo CBE, Artistic Director and Lead Principal, English National Ballet; Ismene Brown, Dance writer for The Daily Telegraph and The Spectator; and Benoit Repellin, Sotheby’s Director and Head of Magnificent Jewels and Noble Jewels.

"I have always loved ballet, and I am half French, so it's in my DNA. But I also worked with Karl Lagerfeld for 10 years, and he taught me so much. Le Spectre de la rose was his favorite ballet ever."

"I’m a huge ballet fan and perhaps because of my French and Russian roots, Le Spectre de la rose has always been one of my favourites so this project meant a lot to me. The ballet is traditionally performed by a man and a woman. As we’re having two ballerinas dance for Sotheby’s performance, I wanted to preserve that duality but express it differently" Carine said.

Roitfeld attributes much of her knowledge about ballet to her friend and former colleague Karl Lagerfeld who she said had taught her a great deal. She also noted that one of her primary sources of inspiration for the costumes was a black and white photograph of Vaslav Nijinsky that had been given to her by Lagerfeld, in which the dancer is wearing a Harlequin costume, a detail she alludes to in a triangle pattern on the ballerina’s tights. "I have always loved ballet, and I am half French, so it's in my DNA. But I also worked with Karl Lagerfeld for 10 years, and he taught me so much. Le Spectre de la rose was his favorite ballet ever," Roitfeld said.

Le Spectre de la rose (The Spirit of the rose) is a short ballet premiered by the Ballets Russes in Monte Carlo on 19 April 1911. Inspired by a poem by Théophile Gautier, it tells the story of a young girl who dreams of dancing with the spirit of a rose from her first ball. Michel Fokine choreographed the ballet to the music of Carl Maria von Weber's piano piece Aufforderung zum Tanz (Invitation to the Dance) as orchestrated by Hector Berlioz in 1841. Léon Bakst designed the original Biedermeier sets and costumes.

"It’s the very first time I was given the opportunity to style a ballet performance. It is always exciting to take on new creative challenges and gain different experiences, and this project especially means a lot to me."

The premiere was set aside for the two biggest stars of the Ballets Russes: Nijinsky danced The Rose and Tamara Karsavina The Young Girl. The ballet styled by Carine Roitfeld, almost 100 years after the acclaimed premiere, stars two ballerinas of the Opéra National de Paris: Bianca Scudamore and Naïs Duboscq.

For the costumes, Roitfeld had a definite vision in mind. One ballerina is wearing a rather classic long black dress, the other a short, deconstructed cocktail dress with tights, in a more sort of punk way. This is expressed through hair and make-up as well” she said. “I wanted both looks to be black. First because black is my signature, but also, because I wanted to have this symbiotic feeling when the two bodies interact with each other."

"The long black dress is Bottega Veneta by Daniel Lee, the cocktail dress is from Nensi Dojaka, a young London-based designer who graduated last year from Central Saint Martins and whom I recently discovered. It’s the first time Nensi will be part of a ballet so she is as excited as I am.” Roitfeld added that she is always on the alert for new talent: "I think what Nensi does is fantastic. I knew she was perfect for the job." Roitfeld contacted Dojaka over Instagram about the project, and the two connected immediately.

The Spirit of the Rose is the world’s largest vivid purple-pink diamond. Mined and cut by ALROSA – one of the world’s leading diamond producers, the 14.83- carat Fancy Vivid Purple-Pink Internally Flawless diamond was faceted from the largest pink crystal ever mined in Russia. The ultra-rare gem will be offered in Sotheby’s Magnificent Jewels and Noble Jewels auction in Geneva on 11 November, with an estimate of US $23–38 million (CHF 21–35 million).

More details on the diamond are available here. 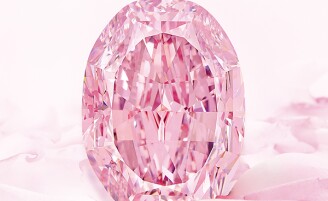 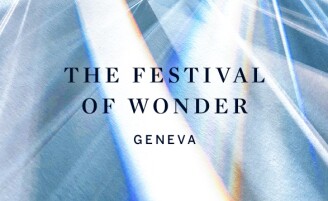