Magic Realism and Beyond

L eading Sotheby’s inaugural October Impressionist & Modern Art Sale is the group Magic Realism and Beyond: Property from a Distinguished Private Collection. Sotheby’s is delighted to present this striking and thought-provoking collection which encapsulates the dynamic artistic creativity in Germany in the early 20th century.

The group includes works from the key protagonists of the New Objectivity movement, a style that emerged in German art in the 1920s, pioneered by artists such as Otto Dix, Georg Grosz and Franz Radziwill. The term was coined by Dr Hartlaub in 1924, referring to a new, unsentimental realism in art that bore a socialist flavour after the First World War. It reflected a contemporary feeling of cynicism and resignation after a period of exuberant hopes, something which had found an outlet in Expressionism. Germany’s Weimar Republic (1919-1933) witnessed anti-militarism and liberalisation flourishing in tandem with political and economic uncertainty. The term ‘Magic Realism’ was invented by the critic Franz Roh in 1925 to describe the shift from the emotional art of Expressionism towards the imagery of this inter-war period, which often alluded to a higher, other-worldly realm. These artists of the New Objectivity strove to achieve a sense of a new stability by employing the ‘magical’ to point towards the uncanny within everyday life.

The works by Dix, Grosz and Radziwill offered in this sale were exhibited at the recent 2018-19 Tate Modern Exhibition: Magic Realism: Art in Weimar Germany. Dix volunteered for service during the First World War, yet the actual experience of combat washed away any national pride he initially felt. Along with Grosz and Max Beckmann, he portrayed the world with an acerbic rumination on social mores. Scene I-Mord (Lot 15) depicts a violent sexual scene as the culprit leans over his victim. The leering figure embodies the deviant individuals, sadistic pimps and corrupt capitalists inhabiting the underbelly of post-war Germany.

Grosz also volunteered for the army in 1914 however he soon broke down and was put into a military asylum for the insane. He returned to Berlin in 1918 where the streets teemed with beggars, prostitutes and black-market profiteers. During the years 1924-29, the economy was moderately stable due to industrialisation and an upsurge of commercial urban culture, but it was a socially turbulent decade and Grosz’s Selbstporträt mit Model im Studio (Self-Portrait with Model in the Studio) from 1930 responds to the zeitgeist of the period by looking inside people’s houses to reveal the sustained mayhem and debauchery within. Depicting himself with a salacious model, Grosz proclaims his artistic detachment, achieved via the exceptional detail, from the veins in the artist’s eyes to the frown on his forehead. Both Dix and Grosz were obsessed with physiognomy and the assessment of a person's character through their physical attributes, chiming with the long tradition of caricature.

"The Streets became dangerous, and where markets for prostitution, murder, and cocaine deals. Barbarism prevailed."

Franz Radzwill’s Gespräch über einen Paragraphen (Conversation about a Paragraph), executed in 1929, captures the ‘magic realism’ strain of the movement most acutely. It is a depiction of two nudes, begun just after Radziwill completed his period of study with Dix in Dresden. Originally called Nakte Frauen, the work was re-worked and re-titled in 1960 to refer to the debate around paragraph 218 of the Weimar Republic’s Constitution criminalising abortion. The work held significant importance for the artist as he kept it in his studio for thirty years and in 1960 added the leaf to the reclining figure, the hat on the left-hand figure and the floating angel. It shows Radziwill’s characteristically saturated colours and tendency to contrast a lit foreground with distant darkness, heightening the uncanny atmosphere. A work of the highest quality, it has been exhibited extensively and represents the auction record for the artist when it was last sold in 2009.

Other works in the group include an impressive 1923 work by Georg Tappert (Lot 12) which shines a sobering light onto the lives of the urban denizens of 1920s Berlin. The portrayal of the models’ generous forms, applied in cream and dense tones, and their straightforward stares, coax the viewers’ gaze to linger.

An earlier Expressionist work by Christian Rohlfs (lot 17) from c. 1908, Knabenportrait (Portrait of a Boy) is a quintessential work of the German Expressionist movement and provides a contrast to works of the New Objectivity. Skilfully executed in quick, bold strokes, it reflects the influence of Neo-Impressionism on the movement.

The creative expression of the artists represented in this wonderful group is inextricably tied to their reactive sensibility to the times they lived in. While Rohlfs relished the freedom of form and colour associated with pre-war Expressionism, its magnetism waned in the post-war society of cynicism and loss, giving way to the realism of New Objectivity. Within the context of growing political extremism, the New Objectivity echoed the fluid social experiences of Germany which brought about the art of Magic Realism. Under this complex umbrella, the visionary and the precise could be maintained side by side; whether it be a negotiation or a juxtaposition between the two realms, these artists sought to reflect on the hopes and compromises of the 1920s. 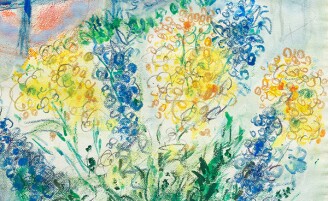