C hinese artist and avowed bon vivant Li Jin is known for his sharp, witty and often irreverent works depicting people, places, food and wine, all encountered on his world travels. Earlier this year, Li embarked on a whirlwind gustatory road trip from Los Angeles to Las Vegas, eventually making his way to New York. On 8 June, an exhibition of 40 exuberant ink on paper paintings and two enamelled bronze sculptures inspired by this journey opens at Sotheby's S|2 Gallery in Los Angeles. “As a Chinese artist experiencing the American way of life, I used the medium of ink to express this fresh and exotic feeling,” Li said. “I have painted myself in the works, along with things I love, like delicious food, beautiful women, and good wine!” In anticipation of his exhibition A Devout Foodist’s Journey to the West, we spoke with Li about the varied Eastern and Western influences on his creative practice as well as his epicurean impressions of American food, people and cities. “America brims with fun scenes and objects just waiting to be painted!” he exclaimed.

Why did you decide to undertake this trip? What were your impressions of the cities you visited?
On this trip, I spent time in three cities: Los Angeles, Las Vegas and New York. LA has her own unique environment – Hollywood Culture. The city is geographically located in the west, which is vast almost to the degree of feeling barbarous. And when you add the tropical plants and sunshine, the city gives you a positive source of energy.

Every day in Las Vegas was like throwing a huge party; there was no concern for day or night, everything was colourful, and everyone was healthy and happy.

New York is an international metropolis. But as a modern metropolis, it is definitely not a young city. Her breadth and history gave me a strong sense of the old days. Although the city is full of vitality, the whole place feels like a fashionable and aristocratic gentleman, one that has a dynamic energy but is also deep and sophisticated. Compared to the others, New York felt more seasoned and had a more American feeling.

What did you think of America, the food and the people?
During my time making work here, whether I painted hamburgers or hotdogs, everything had to do with fast-food culture. From that perspective, it all has a kind of representative quality, and American culture has that to a degree – that is to say, it’s for the masses but also trendy and minimalistic. For example, these fast foods, regardless of their nutritional value or calories, offer their own unique characteristics. The hot dog is especially sexy.

If I had to compare Chinese people with Americans, I feel that Americans are more innocent and direct. They’re also more honest and simple. They’re a nation of people who are more willing to simplify complicated things.

The title of your S|2 exhibition is A Devout Foodist’s Journey to the West. How would you describe a “foodist”?
I’m a person who loves to eat, so you could say that I’m a foodie. The US is a very inclusive country, and that goes for its food as well. All of the classic cuisines of the world can be found here. The restaurants and their ingredients are exquisite, and maintain all the original qualities of the foods from their countries of origin.

Have you taken other trips like this before, where you paint while travelling?
Over the past few years I’ve often travelled abroad, including Japan, Europe, and Australia. I’ll bring my painting supplies on the road with me, and produce works while I’m travelling. I choose to work in this way because new places give me a great deal of inspiration. These feelings of inspiration are things that I can’t imagine when I’m in China. Also, these fresh impressions will give me new drive and influence.

How would you describe your style?
I’m a sensitive artist who uses the language of traditional ink painting to express my life experiences, and also to display my passion and love for life. I think that good artists should be truthful and sincere to themselves.

How are your personal and cultural backgrounds reflected in your art?
At every stage, my works have always been a portrayal of my own life. To look at them now is just like seeing my autobiography, my diary. The stories from each period of my life are all different. For instance, in the early 1980s I was very young – at that time, I was living in Tibet, and the works I made were dramatically different from my works today in terms of style. At that time, the specific environmental, cultural and religious contexts of Tibet left a deep imprint on me.

Can you tell me a little bit about your transition between mediums and painting styles?
I spent a long period of time living in the Beijing hutong alleyways. I had interactions with ordinary people every day and saw the city and its worldly ways. That stage of my work and the Tibetan stage were distinct, and what I painted contained many old Beijing stories and sentiments. Later on, I frequently went abroad. Whether it was to Europe or Japan, I always had new impressions that informed the flavour and style of my work, so I often describe myself as an experiential artist, or an artist who paints intuitively.

Your paintings push the boundaries of tradition but are also rooted in the classical. Can you speak about the dialogue between the two?
There are two aspects of tradition reflected in my work – the pursuit of traditional aesthetics, and the mastery of techniques and skills. I’ve always believed that the language and methods of ink that were created by ancient people should not limit us from moving toward the contemporary and the international. In fact, these methods give us an advantage. To speak of the traditional is not a mountain before us, but rather a road beneath our feet.

What are your insights into the sometimes very separate and sometimes symbiotic Eastern and Western art worlds?
Things might seem different when you look at them, but the coexistence of Eastern and Western artistic ideas can reveal unique insights. We’re living in a time when the world looks smaller from wherever you look. It’s impossible to be closed-off in an absolute way, yet if you look at trends in cultural diversity, a respect for the individual has become something of greater importance. It’s not necessary to deliberately distinguish between things, but you simply have to live for yourself.

Your work has been exhibited all over the world. Is there a discernible difference in the critical response and interest in your work in different regions?
Maybe it’s because my art draws from my life and it’s rather humanised, so regardless of cultural background, I feel that many viewers can still appreciate my work. Wherever I go, I seem to encounter people who understand me.

Living or dead, which artist would you most like to have a dinner with?
The Ming Dynasty calligrapher and scholar Dong Qichang. A feast at his house would certainly be more abundant than all of the eight regional Chinese cuisines combined. 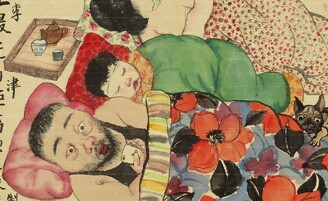