They had been chosen and kept until then in the personal collection of the great American merchant Sidney Janis who represented Jean Dubuffet in the United States during the 1950s. For this major artist of the 20th century, a key player in informal art and theorist of Art Brut: "everything is landscape".

Going through his numerous series, we can see that this pictorial genre is omnipresent and constantly renewed in the artist's work. Realised in the early 1950s after Dubuffet had undertaken three visits to the Sahara Desert with the intention of freeing himself from Western culture, the artist then created landscapes that appear as pictorial magmas that are both lyrical and mysterious.

Jean Dubuffet Pushes Past the Canon of Art History

These two paintings, dated 1951 and 1952, are part of the Paysages du mental (Landscapes of the Mind) – or Paysages mentaux (Mental Landscapes) series that Dubuffet began in 1951. The artist then oscillates between real landscapes, sometimes figurative and imaginary landscapes, completely abstract, where any definite form is denied. Dubuffet writes: "In many paintings of this group (the mental landscapes), I have continually oscillated between the concrete landscape and the mental landscape, sometimes getting closer to one, sometimes to the other." (“Retrospective” Jean Dubuffet, Paris, Editions of the Museum of Decorative Arts, 1961).


In front of these two daring landscapes, the viewer is faced with an uncertainty of scale and reference. Composed of a "high paste" made of a mixture of different materials, shaped and sensual, it lets the painter's gesture to be guessed in a range of reds, ochres, browns and blacks. Their surface, covered with cracks and roughness, is cut into two unequal sections: the earth and the sky, which can be distinguished thanks to a skyline. 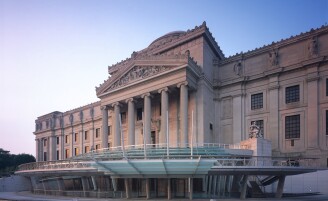 Works from the Brooklyn Museum

Baptiste Brun, curator of the exhibition Jean Dubuffet, A Barbarian in Europe which took place at the Museum between April and September 2019, underlines the artist's audacity: "One of Dubuffet's desires is to find the sap of provocation. He is someone who is into extreme acute chromatics, who loves materialism, he uses adjuvants for his painting, plaster, thread, hair, pebbles. It shocks his world, but at the same time beyond this provocation, there is really a pleasure to experiment and to open new ways of creation." (Batiste Brun, Jean Dubuffet, “The Protester of the Dominant Culture”, France Culture).

Proceeds from the sale of these two major works from the Brooklyn Museum will be used to support this institution. 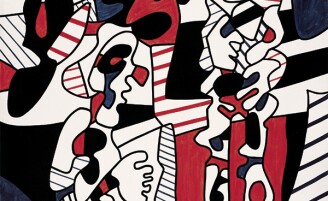