James Bond’s Only Wedding Ring Offered for Sale in London

By Peter Carr
A gold ring given by George Lazenby to Diana Rigg in 'On Her Majesty's Secret Service' sold for £52,500 in the Fine Jewels sale in London on 5 June, and marks the only time in the history of Bond that 007 walked down the aisle.

T his curious lot is definitely one for fans of kitsch pop culture as well as abstract British jewelry. Featuring quite heavily in the often-forgotten but superb 1969 James Bond film, On Her Majesty’s Secret Service—starring George Lazenby as the infamous 007 and Diana Rigg as his adventurous but ultimately tragic partner and wife, Contessa Teresa di Vicenzo, or less formally Teresa "Tracy" Draco.

This distinctive and incredibly rare item was one of two made for the film’s wedding scene, designed by jeweler Charles de Temple. Born in Mexico in 1929, de Temple became a jeweler in Massachusetts before moving to Britain where he became a central figure on the ‘swinging London’ scene—creating one-of-a-kind jewels for the modern women of the city. He was renowned for flamboyant statement pieces, and was also commissioned to create the ring Honour Blackman wore to the London premiere of previous Bond film, Goldfinger.

Central to the film’s narrative, the ring serves as Bond’s wedding band to Tracy, and features the words “All the Time in the World” spelled out in gold—a motif which runs throughout the film, and is incidentally also the theme tune to the film, sung by Louis Armstrong. In a tragically ironic plot device, newly-married Tracy Bond is murdered by Blofeld’s assassins at the end of the film, and the final moments of the film are 007 sobbing the ring’s fateful words “there’s no need to hurry, we have all the time in the world” as he cradles her lifeless body.

In becoming more human, Bond paid the ultimate price. Bond is never again seen distraught in the subsequent films, instead falling foul of the bawdy attitudes of the 1970s, the violent action tropes of the late 80s, and glamour of the millennium-era.

The ring itself is characteristic of de Temple’s style, it is hand-wrought using, its design is bold and sculptural, especially when compared to a plain wedding band. It displays his flamboyant attitude to modern jewelry design and unique abilities when handcrafting gold sculptures. The eye-catching bi-coloured ring’s prominence in the film brought de Temple some considerable success, and he afterwards made a batch of 50 of a similar design which instead stated “All the love in the world” to meet demand. 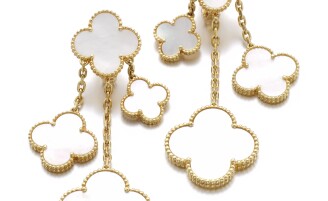 Jewelry
10 Jewels Every Woman Should Have in Their Jewelry Box

This de Temple ring is a piece of cinematic history, as although you only live twice, Bond has only been married once. Perhaps the world’s best-loved spy will find romance again in the upcoming Daniel Craig blockbuster, but it is unlikely to be as tragic a story as told of James and Tracy in On Her Majesty’s Secret Service.

In recent editions, the modern Bond has built a shell of disdain and cynicism, off-hand remarks and distracting quips, and has set the tone for the next one to come along to take up the PPK and the Aston Martin with aplomb. But if Bond does let someone in, it isn’t likely we’ll see the same level of genuine sadness, as the despair, portrayed by Lazenby in the final moments of the film.