Jewellery cataloguer Samuel Hug explains how a replica set of the British Crown Jewels, which features in the Of Royal and Noble Descent sale, helped give the wider public an extraordinary glimpse into Queen Elizabeth II’s coronation. To see the full sale catalogue and to register to bid, click here.

THE SCENE INSIDE WESTMINSTER ABBEY DURING THE CORONATION OF QUEEN ELIZABETH II, 2ND JUNE 1953. (PHOTO BY HULTON ARCHIVE/GETTY IMAGES)

Despite initial reluctance from the Queen and several members of the establishment, the landmark decision was taken to allow the event to be televised. This was the very first time that the wider public had been invited to witness this important ceremony through the medium of television, and every effort was made to broadcast it as widely as possible.

The event brought millions of viewers together: viewing parties were held around television sets throughout the country, people sat down to enjoy the newly-devised dish of ‘Coronation chicken,' and street parties went on despite the rain. The televising of the coronation was a moment of unprecedented openness and inclusivity from the Royal Family, and ushered in an era of renewed public reverence and affection for the monarchy.

A replica set of the Crown Jewels offered in our upcoming sale, Of Royal and Noble Descent (17 January, London), is particularly representative of this change of tone around Elizabeth II’s coronation.

This set was among several manufactured and exhibited to the public in both the UK and the Commonwealth at the time of the coronation. These replica sets in gilt metal and paste were designed to give a wider audience a glimpse of the extraordinary objects at the heart of the coronation’s pageantry.

The team of skilled men and women who created the replicas worked for the firm Robert White & Sons, based in Neal’s Yard in Covent Garden. In addition to creating these replica sets for the coronation, they also had close links to the many theatres in the area, specialising in supplying crowns and armour for theatrical performances. Particular pieces would also be commissioned by museums, adorning wax figures and filling display cabinets throughout the world. The small atelier’s day-to-day operations were also documented as part of the BBC series ‘Look, Stranger’ in the 1970s.

REPLICA OF SAINT EDWARD'S CROWN. FROM OF ROYAL AND NOBLE DESCENT.

Of the pieces replicated here, two of the best-known are St Edward’s crown and the Imperial State Crown. St Edward’s Crown is a copy made in 1661 of a medieval original, traditionally used in the crowning of monarchs. The solid gold construction of St Edward’s crown means that it is extremely heavy, weighing in at 2.25 kilograms. Most monarchs had favoured lighter crowns for their coronations, and it had not been used for over 200 years before George V revived the use of it for his coronation in 1911.

After her own coronation, Elizabeth immediately proceeded to St Edwards’ chapel in Westminster Abbey to exchange it for the more wearable Imperial State crown for the remainder of the ceremony. The Imperial State crown is worn by the Queen for the opening of parliament among other formal state occasions, and contains a number of storied stones including St Edward’s sapphire, and the so-called ‘Black Prince’s Ruby,’ which is in fact a large red spinel, gifted to Edward the Black Prince by a Spanish King in 1367. The crown was originally designed for George VI, and shortened in height to better suit Elizabeth.

REPLICA OF THE IMPERIAL STATE CROWN. FROM OF ROYAL AND NOBLE DESCENT.

Also well-known are the Sceptre of State and the Sovereign’s Orb. The Sceptre of State symbolises the monarch’s role as head of state, and famously contains the 530 carat Cullinan I diamond, the largest faceted colourless diamond in the world. The Sovereign’s Orb is among the most purely religious items among the crown jewels – the sphere beneath a cross symbolising Christ’s authority over the world. Together with the Imperial State crown, these pieces form probably the most recognisable triumvirate of British royal regalia.

Notably, this set comprises not only these major pieces, but also a number of the more obscure items used during the ceremony itself.

Crucial to the coronation ceremony is the ampulla and the anointing spoon. The ampulla is the receptacle for the oil used to consecrate the new monarch, and was manufactured for the coronation of Charles II in the form of a standing eagle. Poured onto the 12th-century anointing spoon, and then used to anoint the monarch’s hands, breast and head, the oil was specially mixed according to a secret recipe of ambergris, civet, orange blossom, rose, musk, jasmine and cinnamon. However, the last remaining phial of it had been destroyed in a bombing raid in 1941, and as the chemists who had concocted it were no longer in business, a new firm, Savory and Moore Ltd, had to be entrusted with recreating it for the coronation. The anointment is the most sacred part of the coronation ceremony, and the Queen was shielded from the cameras for its duration.

Displayed together, this remarkably extensive set of replicas played a vital role in opening up the monarchy to a wider audience, explaining the intricate iconography of the ceremony, and offering a rare and dazzling overview of these extraordinary works of art and statehood. 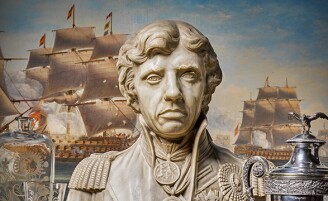