Helen Frankenthaler's Immersive Seascape Is a Monumental Achievement in Abstraction

H elen Frankenthaler’s signature style was first developed in her groundbreaking 1952 painting Mountains and Sea. By diluting her paints, she allowed them to completely soak into the fibers of her raw, unprimed canvas, achieving an approach to abstraction that voiced a substantive departure from the work of the Abstract Expressionists. While thoroughly abstract and equally concerned with emphasizing the surface of her works as were her contemporaries like Jackson Pollock, Robert Motherwell (to whom she was married) and Barnett Newman, Frankenthaler brought a new perspective and a vibrancy of color and light.

Painted in 1975, Frankenthaler’s nine-foot panoramic work, Newfoundland, was painted following a period of significant changes in the artist’s life. In 1971 she divorced fellow abstractionist Robert Motherwell after thirteen years of marriage. Nonetheless, the tumultuous first half of the 1970s was a period of great professional success which included having been given a celebrated retrospective at the Whitney Museum of American Art in 1969. The intensity of Frankenthaler’s life came through boldly in her artistic production as evinced by the mesmerizing physicality of Newfoundland.

At once overpowering in its scale and raucous composition, Newfoundland is also delicate and intimate, drawing viewers in to the subtle bleeding edges produced by the thinned paint. Passages of color undulate together and blend in a riot of movement that is at once a coastal seascape, as suggested by the title, and a tour-de-force of abstraction. 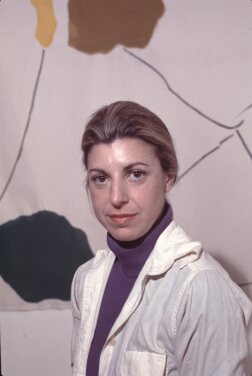 Newfoundland, a masterpiece from Frankenthaler’s highly acclaimed period of production in the mid-1970s, has been unseen by the public since its unveiling at the artist’s gallery show in 1975. The painting has been treasured in the esteemed collection of Blema and H. Arnold Steinberg for nearly 40 years. It emerges today as a heroic testament to Frankethaler’s unprecedented style and visual vocabulary.