Georgia O’Keeffe: A Modern Master with a Radical Vision

By Annikka Olsen
As three spectacular paintings come to Sotheby's Contemporary Art and American Art auctions in November from the Georgia O’Keeffe Museum – being sold to benefit the acquisitions fund – discover more about this titan of 20th-century art, whose work is more popular than ever at auction, exhibitions and within our collective cultural psyche.

O'Keeffe By The Numbers

W ith her inimitable style and an oeuvre brimming with iconic works, Georgia O’Keeffe has come to be regarded both as a juggernaut within 20th century American Modernism and a revolutionary painter within the history of art on a whole. The singular way in which she viewed the world around her is reflected in her art by way of light, color, and structural arrangement, which was radical during the height of her career, and continues to capture minds and imaginations of viewers today. The subjects of her work are often facets of everyday life and the natural world, recognizable to most, but it was her stylistic approach and vision of these subjects that marked her paintings as both revolutionary as well as some of the greatest works ever completed.

Although O’Keeffe had been making and studying art previously, it was the introduction of her work to Alfred Stieglitz and his renowned 291 gallery in New York City—where she ultimately had twenty-two solo shows—that truly marked the beginning of her long and illustrious career. At 291, O’Keeffe met and exhibited alongside a number of America’s leading Modernist artists, including Arthur Dove and Paul Strand, but the uniqueness of her aesthetic and mastery of medium arguably equaled, if not surpassed, that of her contemporaries. It was during this time in New York in the early 1920s that she endeavored on a series of architectural themed paintings, which were among the first works that fully illustrated her distinctive observations of her own milieu. In A Street (1926), the view is upward, looking between a long avenue of tall buildings to a strip of sky—a common vantage within a city like New York—omitting the street level entirely. Through composition, coupled with a somber color palette, O’Keeffe skillfully portrays a moment of solitude and quiet within a city known for its steady din.

Also beginning in the 1920s were O’Keeffe’s beloved botanical works, often inspired by her frequent sojourns to upstate New York. Rather than creating an overall portrait of a flower, tree, or landscape, O’Keeffe magnified specific minutia of her subjects, capturing in vivid detail a single moment of observation. She often further aggrandized the solemnity of these moments by masterfully employing facets, or even simply impressions, of abstraction, as can be seen in Calla Lilies on Red (1928), where context has been obliterated and replaced with a rich, inscrutable veil of pigment. These idiosyncratic studies of the natural world, which persisted throughout the rest of her career, have become iconic of her oeuvre and have largely established her as one of the most innovative and leading American Modernists.

By 1929, O’Keeffe began travelling to the American Southwest regularly, and settled there permanently in 1949. The landscape, nature, and quality of light, so different than what she experienced in the Northeast, gave her new inspiration and continuously affected the trajectory of her work subtly over time. A sense of brightness, and the juxtaposition of clarity and abstraction began to feature prominently, as can be seen in works such as Cottonwood Tree in Spring (1943); there is a sense of dreaminess within the washes of bright color that undulate across the canvas, yet simultaneously the figuration of the tree and its leaves, seemingly ruffled by an unseen wind, are visually apparent.

Although her rate of production declined in the last years of her life due to illness and increasing blindness, the work she had completed by that point had already established her as one of the leading artists of her time, male or female, and arguably solidified her position as one of the most significant painters of all time. Beyond the exquisiteness of her work, her character and the persona she often presented only furthered her standing within the art historical canon; although she never identified as such, her dismissal of her gender as a contributing factor to her skill or ability—as well as her propensity to don men’s clothing—has inspired many to consider O’Keeffe a feminist icon.

"The uniqueness of her aesthetic and mastery of medium arguably equaled, if not surpassed, that of her contemporaries."

Within recent years, her work and legacy of has grown exponentially and largely without precedence. In 2016 she was the subject of a major retrospective at the Tate Modern, London, which saw over 100 paintings by the artist brought together, and in 2017 she was the subject of a major solo exhibition on both her life and work at the Brooklyn Museum. There is both mass appeal as well as individual allure to be found in the work of Georgia O’Keeffe, undoubtedly contributing to her steady and constant popularity—today, her body of work is undeniably a cultural treasure.

A Street (1926) and Calla Lilies on Red (1928) will appear in the Contemporary Art Evening auction on 14 November.

Cottonwood Tree in Spring (1943) will appear in the American Art auction on 16 November. 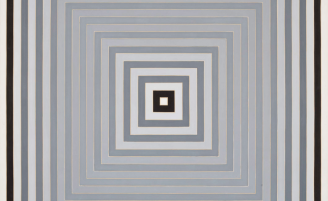