From Maharajahs to the Met Gala, Men's Jewelry Through the Ages

J ewelry has a unique way of expressing something about its wearer, whether that is power, wealth, exuberance or status. For centuries, men adorned themselves with jewelry just as much, if not more than, their female counterparts.

Whereas women’s jewelry tends to be closely linked to fashions, necklines and hair styles, men’s jewelry is rooted in functionality and has been worn according to an unwritten rule book for thousands of years. Take, for example, the use of hardstone intaglio rings –more commonly thought of as signet rings – that were used both as wax seals and as a representation of societal position in Ancient Rome.

Much later, in the 18th and early 19th centuries, men’s jewelry balanced decorative functionality with an air of gravitas. It was only at the advent of the Victorian era that men’s jewelry was tamed by societal convention – only what was needed was acceptable in a time period of strict dress codes and relentless decorum. Men could be seen wearing jewelry-with-purpose, such as a gold watch chain or a pin to tame an elaborate cravat. In fact, men who flaunted excessive jewels, buckles and accessories were referred to derogatorily as ‘fops,’ meaning someone too overtly concerned with appearance.

The Art Deco design period saw a fascinating revival of male finery, led undoubtedly by the maharajas of India and, most notably, the exceptionally wealthy Maharaja Sir Bhupinder Singh of Patiala (r. 1900-1938). In 1928, he commissioned Cartier to create a five-tier diamond and ruby festoon necklace in which a cushion-cut 234.6 carat yellow diamond would sit, accompanied by a collection of diamond-set brooches, embroidered clothing and drop earrings. Sadly, the necklace was lost after the Second World War.

Another notable collector of fine jewelry for men was the Duke of Windsor Edward VIII, whose passion for exceptional pieces was only surpassed by his wife, the Duchess of Windsor Wallace Simpson. He was known to own a number of ‘dress sets’, comprising matching buttons, pins and cufflinks to accompany formal attire. One particular Art Deco platinum and diamond dress set by Cartier, gifted to the Duke by his wife in 1935, was sold by Sotheby’s in 2010 for £115,250.

From the 1930s to the 1960s, the proliferation of automatic wristwatches – once again creating the ‘correct’ balance of form and function – gave men a new way of expressing their style and status. It was not unusual to see a society gentleman sporting a fantastic watch, gold cigarette case (often engraved or decorated with enamel and gemstones) in addition to a bespoke dress set by the likes of Van Cleef & Arpels, Harry Winston, Cartier and David Webb.

Today, men’s jewelry is a continually evolving topic of sartorial conversation. Excellent books like Jewelry for Gentlemen by James Sherwood (2018) have sought to spotlight the somewhat unwritten history of men’s adornment in more recent centuries. 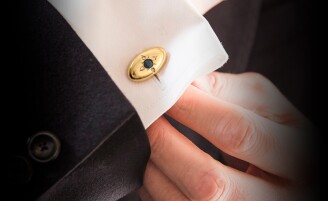