From Friendship to Collection: Major Ion Harrison and the Scottish Colourists

M ajor Ion R. Harrison was one of the most important patrons and supporters of the Scottish Colourist artists and a selection of exceptional works owned by him will be sold in Sotheby's The Way of Colour: Pictures from the Harrison Collection which opens on 10 March. Harrison first encountered the work of the Colourists when he attended an exhibition of paintings by Samuel John Peploe at Alex. Reid & Lefevre in Glasgow. Harrison was instantly struck by the modern and bold character of Peploe’s work and later recalled: "I had never seen anything in art similar to these pictures…They really startled me for, to my eyes, they were so ‘ultra-modern'".

The Vibrant Art of The Scottish Colourists

"To each of these fine artists I owe a debt of gratitude which can never be repaid, for it is to them…that I owe what knowledge I may have of the qualities which, collectively make a work of art."

Harrison’s personal recollections and close relationships between himself and the artists give this collection an incredible sense of immediacy. The first of the artists Harrison met was George Leslie Hunter, and he was drawn to Hunter’s modern approach to painting. Indeed, Harrison recalled: "Hunter always maintained that he was not painting for today but for fifty years hence…Having lived twenty five years with several of them I find that Hunter’s prophecy is coming true." This modern approach can be seen in Hunter’s painting The Harbour, Villefranche, which demonstrates the influence of the Fauvist artists and in particular that of Matisse.

In 1928, Francis Campbell Boileau Cadell was the second artist that Harrison met and a close friendship developed straight away. Cadell often visited the Harrison family at Croft House, sometimes staying for a number of weeks. In 1932 the Harrisons joined Cadell on his annual trip to Iona, a holiday that inspired Harrison to acquire Rocks, Iona. As Cadell became increasingly ill, his friendship with Harrison provided much appreciated support. Harrison acquired some of Cadell’s finest works which adorned the walls of Croft House and Carnations can be considered one of the very finest.

It was Cadell who first introduced Harrison to Peploe in 1932. When Peploe came to say at Croft House, Harrison remarked that it was "a very great privilege". Although their friendship did not gain the same level of familiarity with Cadell, there was great mutual admiration between them and from Harrison, a genuine marvel at Peploe’s artistic skills. Two of these works, Carnations and Ranunculus and Street in Cassis are particularly fine examples of Peploe’s very best paintings. It seems Harrison had less of a personal connection with the last of the Colourist artists, John Duncan Fergusson, who spent most of his painting career in the South of France. Nonetheless, Harrison was evidently drawn to Fergusson’s impressionistic early style as can be seen in Paris, 1908.

It seems that Harrison himself held these artists in equal regard and wrote: "I consider them all to be equally great, each in his own special way. One of them could excel in painting something which another could not tackle quite so successfully." Despite their differences in subject, style and colour, the work of these artists hung in Croft House side by side in glorious harmony, brilliant flashes of daring colour giving a bold modern texture to an elegant Scottish home. In 1951, a total of 179 works by the Colourists were shown when the Harrison collection was exhibited in its entirety at the McLellan Galleries in Glasgow. The exhibition stood as a testimony to Major Ion R. Harrison, a great collector, patron and perhaps most importantly friend to a very special group of artists.

When a collector has brought together a great gathering of works by artists who were his personal friends, we have something that is entirely different. 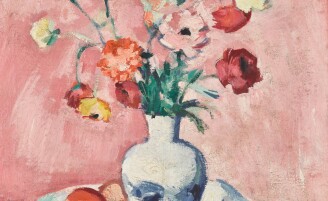