For John Constable, Another Old Master Offers Relief from Heartache

F or John Constable, the fall of 1832 was a season of great sorrow. In late August, Constable suffered the loss of his dear friend John Fisher, the Archdeacon of Berkshire. Fisher’s passing left Constable in a state of grief; for relief, he turned to seventeenth century Dutch Master painter Jacob van Ruisdael. As Constable wrote to C.R. Leslie on September 4th, 1982, copying Ruisdael’s Winter Landscape would be a form of therapy:

I cannot tell you how singularly this death has affected me…I shall pass this week at Hampstead to copy the winter piece [by Ruisdael] – for which indeed my mind seems in a fit state.

From this period emerges a remarkable copy, titled A Winter Landscape with Figures on a Path, a Footbridge and Windmills Beyond (After Jacob van Ruisdael). As he was finishing the work, Constable showed it to his long-time friend, fellow painter John Dunthrone. However, just a few days later, Dunthrone died suddenly. His passing deepened Constable’s grief and imparted the painting with even greater significance. As Constable notes in an inscription on the back of the work:

The painting is a masterpiece in its own right, distinguished from the original by the addition of a small dog in the lower left corner. The landscape captures a Dutch pastoral scene in late winter: snow covers the ground, and villagers bundle up against the cold. However, to the right of the horizon, we see a change approaching. As Constable notes in his 1836 lecture to the British Institution on Dutch and Flemish landscape painting:

“[Ruisdael’s] Picture represents an approaching thaw…there are two windmills near the center; the one has the sails furled, and is turned in the position from which the wind blew when the mill left off work; the other has the canvas on the pulls and is turned another way, which indicates a change in the wind. The clouds are opening in that direction, which appears by the glow in the sky to be the south…and this change will produce thaw before the morning.”

The scene concerns the passage of time: winter turns to spring, and what is dead will soon be born anew. For Constable, this served as an appropriate reflection of his grief in the fall of 1832. 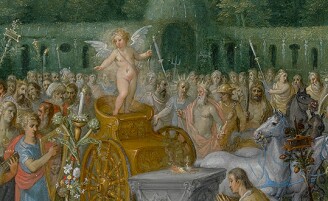