S otheby’s is honored to present a unique and exceptional selection of Spanish post-war artists in our Paris Contemporary Evening and Day sales, coming from an exceptional collection. This selection is especially led by three masterpieces by Manolo Millares, Antoni Tapies and Antonio Saura.

In the 1950s, Spanish artists shared an urge to seek new forms to express the concerns of their era and to contemporize a legacy expressed in a masterly manner by El Greco, Velázquez and Goya, as well as Picasso and Miró. Detaching from an artistic canon that was obsolete following the wars of the opening half of the 20th century, they explored movements such as Art Informel and Abstract Expressionism. The long period of Spain’s isolation, from the end of its Civil War until after World War II was therefore followed by a period of intense artistic activity.

In contrast with the generation of Picasso, Miro and Gonzalez, which had lived and worked largely outside Spain, this new generation, though exposed to various art movements while studying abroad, returned to their homeland. There, much of their time was devoted to the propagation of contemporary aesthetic ideas. Regrouped geographically, these young artists met and worked together. They formed groups that shaped Spain’s post-war artistic landscape at a time when many galleries had closed and most of the dealers and collectors seemed to have disappeared. Of all the groups of artists who have been formed in Spain in the 20th century, we can say that El Paso, along with Dau al Set, is undoubtedly the most important in terms of the definition of the Spanish avant-garde.

The El Paso group was also born from this artistic emulation. In 1957, artists such as Antonio Saura, Manuel Rivera and Manolo Millares signed a manifesto that defined their activity. The members were committed to create an environment that allowed the creative development outside the formalisms established in fine arts.

In their founding manifesto, the artists declared that the group constituted “an activity which aspires to create a new state of mind in the Spanish art world […] It will fight to overcome the acute crisis which Spain is now suffering in the field of the visual arts. […] We are trying to attain a revolutionary plastic art which will include both our dramatic tradition and our direct expression and be our historic response to a universal activity” (José-Augusto Franҫa, Millares, Barcelona 1978, p. 64).

While most of these artists focused on abstraction, they all rejected the labels imposed and the use of terms such as conceptual, constructivism, expressionism... The artists from El Paso believed in free creation and research without borders. Their use of rough materials such as iron, burlap, chicken wire, sand and paint impasto reflect their feeling of despair, aggression or loneliness.

El Paso had only three years of existence, however, it was prolific and international as few Spanish groups have been in history. After an intense activity, its participation in numerous exhibitions and 15 signed letters, El Paso decided to put an end to its existence in May 1960. Like other artists of the informalism, the artists from El Paso served as a bridge between tradition and the new trends of the radical avant-garde. 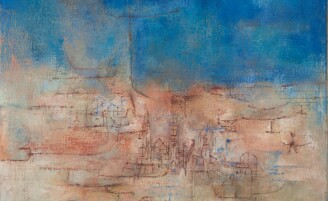