NEW YORK – In her 23 years at the Museum of Modern Art, Italian-born design curator Paola Antonelli has been known to shake things up, whether it’s acquiring video games for the institution’s collection or creating an experimental online project about design's history of violence. Now Antonelli is helping MoMA tackle yet another polarising topic: fashion. Although not entirely new territory for MoMA, fashion was last exhibited there in a 1944 show called Are Clothes Modern? Referencing that title and asking the same question, Items: Is Fashion Modern?, organised by Antonelli, opens 1 October at MoMA. “The exhibition features items of clothing – some humble masterpieces, others high fashion – that tell the history of design,” says Antonelli. It took six months to fine-tune the garments, which range from the little black dress to the hijab. The show is “not about the personality of the fashion designer, nor a particular style or era,” explains Antonelli. “It’s about the attention to an individual object.” Ahead of the exhibition, discover more about Antonelli’s pragmatic approach to fashion and her curatorial vision for the exhibition.

PAOLA ANTONELLI, DIRECTOR OF RESEARCH AND DEVELOPMENT, AND SENIOR CURATOR, DEPARTMENT OF ARCHITECTURE AND DESIGN, THE MUSEUM OF MODERN ART, NY. 2008. PHOTOGRAPH BY ROBIN HOLLAND.

How long have you been interested in bringing fashion back to MoMA?
When I started at MoMA, I noticed that there was basically no fashion in the entire collection. I found this interesting because if the museum was trying to follow a Bauhaus model, clothing was part of its design landscape. I got a few explanations about how fashion was too ephemeral and connected to season. I thought that was not really convincing, and about a decade ago, I began a list called ‘Garments that Changed the World’ of pieces I wanted to insert into the collection. For instance, in 2004 we had an exhibition called Humble Masterpieces, and I added the white t-shirt. The director of the museum knew that I was doing this, so one day about three years ago, he suggested making a show of it.

What garments had MoMA acquired prior to your arrival?
There was one piece: a beautiful Fortuny Delphos gown, acquired in the late 1980s.

Will it make an appearance in Items?
No, even though it changed MoMA, it was not a garment that changed the world.

"If you could wear a painting to work, maybe I would consider the painting as important as fashion."

How did your past experience in fashion shape your curatorial vision for the collection and exhibition?
In Milan, you work in fashion as if you were waiting tables. From ages fifteen to eighteen, I would grab a piece of focaccia after school and walk a few blocks to the Armani showroom. By interning in their PR office and working with everyone from marketing to fabric suppliers, I learned that fashion was an industry and not just this magic cloud from above.

The New York Times fashion critic Vanessa Friedman said that fashion has long been seen as “the stepchild of the art world.” How do you feel this perception is changing?
This doesn’t surprise me because all design is kept at a little bit of an arm’s length in the art world. There have been a few exhibitions, like the Alexander McQueen show, that stimulated curiosity and opened the floodgates to museums being interested in fashion. Clothing is your own interface with the world, and personally I don’t think there’s anything more important than what people live in and what they use to express themselves. If you could wear a painting to work, maybe I would consider the painting as important as fashion. Perhaps the myth of the creative spirit and the artist needs to be safeguarded otherwise there would be a collapse of the whole system.

Why call the exhibition ‘Items’? Did you feel that title helped justify the show’s place at MoMA?
I like titles that are one word, but I wanted ‘Is Fashion Modern?’ as the subtitle because it was important to tie this to the 1944 show. I also wanted to convey the fact that it’s a MoMA show, so it is object driven. We are not The Met, and we are not FIT, and it would’ve been pretty sad if we tried to do the same thing.

How does Items differ from the 1944 show? Why change ‘clothes’ to ‘fashion’ in the title?
Because I wanted to make a jump in scale. The curator, Bernard Rudofsky, was really looking at individual garments. He was critiquing their functionality at face value – how rational, comfortable or wasteful they were. I believe we’ve reached a very different and much better place when it comes to comfort and self-expression. Our problem today is at a systemic level so I wanted to invite people to consider every item as part of a system and to think of environmental responsibility, labour practices and supply chain.

Tell me more about the process of selecting garments for the show.
It was hard to draw a line. I originally thought 99 was right for the space, then it grew to 111. We decided to take New York as our center of gravity and observatory. Just by sitting on the 7 train going to Flushing, you can glance at the whole world. But we know very well that we cannot tell everybody’s history, so we also travelled. I went to Korea, Japan, India and Bangladesh among other places. My colleague went to Nigeria and South Africa. We tried to be comprehensive without trying to be universal. In the exhibition, people will also be able to nominate their own essential items.

What was the first item that needed to be in the show?
Oh my god, so many but probably the white t-shirt.

And the last one to be added?
Sunscreen. In the exhibition, people will also be able to nominate their own essential items.

How does this exhibition take fashion into the future?
Objects will be shown in the format that made them so influential in the last 100 years, and about a third of the items will have new interpretations. One example comes from Lucy Jones, a designer focusing on disabilities who created pantyhose for people in wheelchairs. In another, Kerby Jean-Raymond of Pyer Moss, inspired by Pierre Cardin’s Space Age collection, decided to contribute a view of how the world will be seen in 50 years. His work focuses on the need for flotation devices in clothing because of the oceans rising, so it becomes a bit of a dystopia.

Click the slideshow to view images from MoMA's Items: Is Fashion Modern? exhibition: 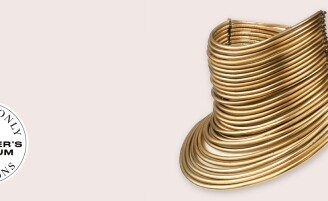 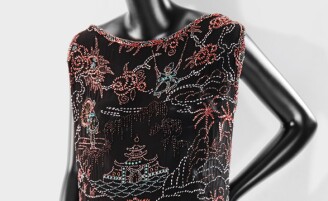