J erome and Ellen Stern were passionate collectors of art from across the globe, including Israel, and they played an important role in supporting the museums there. Regular visitors to their home in Jerusalem, they frequently visited with artists and curators.

They enjoyed a particularly long and close friendship with Menashe Kadishman and acquired many works by the artist over the years. The Forest was a particularly important purchase, having originally been displayed in Central Park as part of an exhibition that extended beyond the walls of the Jewish Museum in a show curated by Susan Goodman called Using Walls in 1970.

In the late 1960s and early 1970s, Kadishman was an important exponent of the Environmental or Land Art movement. A friend of Robert Rauschenberg, Andy Warhol and Christo, The Forest presaged Christo and Jeanne-Claude's The Gates in Central Park by some 35 years. Christo was known to acknowledge Kadishman’s sculpture as an inspiration for his own environmental projects.

The other sculpture by Kadishman offered in TO LIVE WITH ART: Property from the Jerome & Ellen Stern Collection, Om, is an outstanding example of Kadishman’s gravity-defying sculptures full of dynamic tension. Another of Kadishman’s works from this series, Suspended is a popular work at the Storm King Art Center.

Also represented in the collection is Zadok Ben-David, an Israeli sculptor of enormous talent. Now residing in London, he has exhibited his installations all over the world, including in England, Israel, China, Japan, Uzbekistan, South Korea and Australia, Germany and Italy.

Ben-David was also the focus of Sotheby’s first-ever selling exhibition of outdoor sculpture in Asia at the magnificent Singapore Botanic Gardens in 2012. The two sculptures in this sale are rare early works from 1988, the period of his iconic sculpture on the Tel Aviv Beachfront, Beyond the Limit. 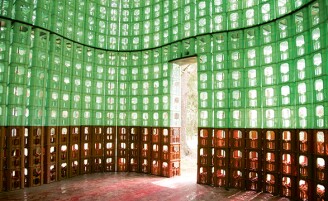