T o mark the centenary of the birth of the iconic photographer Helmut Newton, 12 exceptional photographs covering the artist’s work from the 1980s to 2002 are being offered in our auction Magnificent Nudes.

Newton drew visual inspiration from fashion, documentaries, eroticism and film noir, skillfully and elegantly synthesizing the era of the 1980s. For Newton, his role as a subversive photographer was to “seduce, amuse and entertain”.

Among the iconic images in this group is a large photograph of Roselyne, Château d’Arcangues which Newton selected in 1984 for the Private Property Suites representing the best of his work.

There is also the complete portfolio of 10 photographs of one of Newton’s favorite models, Arielle.

Three photographs in the auction come from the archives of Playboy Magazine which were sold in 2003 on 50th anniversary of the magazine.

Three polaroids are also included in the sale. Helmut Newton used this medium and camera very frequently like preparatory drawings for his famous photographs:

And finally, this spectacular format of Newton is part of the series Yellow Press, where Helmut Newton enlarged photographs he had collected from the press. It was part of one of the last exhibitions made by Helmut Newton and Simon de Pury in 2002. The images were printed on a laser machine that was destroyed after the series was printed. It was made on an early very large printer that was able to print in this large scale. 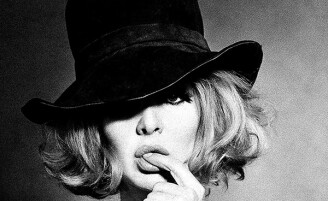