S otheby’s Modern and Contemporary South Asian Art Online auction (6–16 September) presents a fantastic opportunity to acquire affordable paintings and prints by some of the most important artists from the Indian subcontinent. Featured artists include Francis Newton Souza, Maqbool Fida Husain and Sayed Haider Raza, three of the founding members the Progressive Artists’ Group (PAG), which became one of the most influential art movements in India. This March, Sotheby’s sold a painting by Zainul Abedin for $150,000 ­– the artist’s second highest price at auction. Now with a work being offered for just $15,000, the Modern and Contemporary South Asian Art Online auction is making it more possible than ever to own a piece by this father of modern Bangladeshi art. Ahead, discover some of this category’s most desirable artists, all with works at accessible price points. 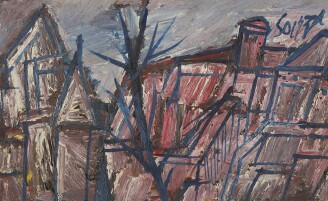 B orn in 1914 in Kishoreganj, in the erstwhile East Pakistan, Zainul Abedin played a pioneering role in the development of the modern art movement in Bangladesh. Throughout his career he turned repeatedly to nature depicting vignettes of the timeless, expansive, unspoiled rural landscapes of his childhood spent along the Brahmaputra River. In 1943, when Abedin was 29 years of age, the Bangladesh he knew transformed and mutated before his eyes, scarring him with scenes of harrowing human exploitation and degradation – a famine had broken out in his homeland. Abedin wasted no time transferring these nightmarish scenes into compositions, using the affordable medium of black ink and wrapping paper. Abedin’s Famine Sketches demonstrated his passionate and unwavering commitment to helping the people of Bangladesh. He persevered in sincerely and assuredly depicting the damned as well as the beautiful, with uncompromising realism. He earned him much acclaim as a pioneer of artistic social commentary.

R aised a Catholic in Goa, Francis Newton Souza moved to England in 1949 shortly after his establishment of the Progressive Artist's Group. In 1960, he was awarded a scholarship by the Italian Government, enabling him to study and travel to many European cities, including Rome, Madrid, and Amsterdam. This mixture of influences formed the framework for his compositions during this time. European churches – as well as the stained-glass windows of Goa – constituted inspirations for Souza.

The current lots, painted in 1964, mark an interesting admixture of styles: on the one hand, they are suffused with the colorful influences of Souza’s earlier period when he painted in Goa; concomitantly, their disjointed depiction of buildings and churches demonstrate the impact of Souza’s time in Europe after 1949. The use of black outlines to separate the buildings also reveals the influence of the stained glass windows in the Roman Catholic churches of Goa as well as the churches that he visited in Europe during his travels. By incorporating the spiritual influences of his childhood within these cubist and abstracted compositions, Souza created a body of work where religion and Modernity co-exist.

I n the 1940s, Sayed Haider Raza had already successfully deployed light and color in his works to convey the way landscapes resonated around him. He moved to France in 1950 and was impacted by the post-impressionists; Vincent Van Gogh, Paul Cezanne and Paul Gaugin. He started to use more oil-based pigments and his work focused on the moods that color evoked. In 1962, Raza moved to America to teach at Berkley where he came into contact with many American painters; Sam Francis, Jackson Pollock and Mark Rothko. These artists employed Abstract Expressionism and Raza began to paint with abstract narratives and a deeper sense of spatial recession. Drawing elements from the French countryside where he resided, along with his childhood memories of India, Raza’s abstract landscapes painted in the 1970s and early 1980s mark a very important transitional phase in his career and are his most successful commercially.

O ver the course of his career, Ram Kumar bore witness to a number of pivotal movements in art history, which were to have a profound effect on his painting. He was born in Simla in 1924 and later moved to New Delhi, where he studied art under the tutelage of Sailoz Mookherjea. In 1950, he left for Paris, where he would continue his studies with the great masters André Lhote and Fernand Léger. Like Francis Newton Souza and Sayed Haider Raza, as a first generation postcolonial Indian artist, Kumar was struck by a desire for global success yet retained his need to preserve a close connection with his homeland. Thus, while European styles infused his work, his subject matter remained distinctly Indian. Using color and subtle gradations in his canvases, Kumar was able to break down forms and ideas to their abstracted core. Through this practice he had come to the realization that abstraction had an inherent presence in all Indian art, and had formed separately to its Western counterpart.

N andalal Bose is widely regarded as one of the pioneers of modern Indian art. A student of Abanindranath Tagore, Bose’s art was popular for its 'Indian-ness'. In the current lot, Bose represents the famous Vaishnava story of Jagai and Madhai. These were two brothers who were born into a high Brahmin family but due to bad associations fell prey to various vices. Eventually they were embraced and forgiven by Chaitanya Mahaprabhu, a Bengali Hindu saint, and the chief proponent of the Achintya Bheda Abheda and Gaudiya Vaishnavism tradition within Hinduism. He had deep religious and cultural impact in Bengal and has been credited with the revival of Hinduism in Eastern India. 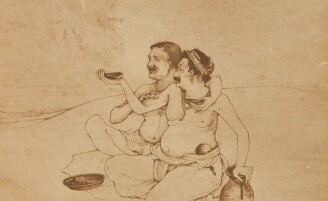 Mera Naam Joker is a 1970s Bollywood movie starring Raj Kapoor. The film is based on a clown who must entertain his audience even at the cost of his own distresses.

Raj Kapoor, known to be the greatest showman of Indian cinema, gained international fame, most importantly in the then Soviet Union. In the Nehruvian 1950s, Communist Russia and Japan were considered role models for a new nation in the making, with the former being a particular favorite of Nehru. Prevailing geopolitical circumstances often define the fate of cultural imports which is how Bollywood first made it to Russia. The fan reception Kapoor received in the Soviet at the time has often been compared to the frenzy surrounding the Beatles a decade later.

This film was partly made with the participation of Russian actors and was even shot partially in Moscow. Instead of being released as a single film, the film was released in three parts. Each of the parts were box office successes in the history of both Indian and Soviet cinema at the time. The current lot originally came from a Private Russian collector who had been gifted this by Husain himself.