Basquiat's Iconic Warrior Figure as the Artist's Self Portrait

“I don’t know if for me it’s the paintings or what… but… black people are never portrayed realistically in… not even portrayed in modern art enough, and I’m glad that I do that. I use the ‘black’ as the protagonist because I am black, and that’s why I use it as the main character in all the paintings.”

The isolated hero is a favoured motif of Jean-Michel Basquiat. These figures often take the form of mysterious, spiritual prophets or fearless warriors, self-assured in the way they confront the viewer directly. There is a distinct connection in Basquiat’s oeuvre between martyrdom, heroism and the artist, and here, the warrior might be interpreted as a self-portrait, the triumphal symbol of the Black artist conquering an unseen oppressor within the image, succeeding in an art world that was predominantly white.

With one arm raised to the sky in victory, the protagonist of Untitled (Red Warrior) exemplifies Basquiat’s trademark hero, emerging from the storm of brushstrokes that threatens to engulf the figure’s crimson form. Created in 1982, the audacious canvas work incorporates signature elements from the artist’s hybridised visual lexicon. This work is a triumphant display of the human form, presenting an extraordinary vision of Basquiat’s artistic prowess.

Basquiat’s meteoric rise to international stardom is the stuff of legend. He burst onto the scene with his participation in the landmark exhibition 'New York/New Wave' in February 1981 at MoMA P.S.1 in New York. Established art dealers took notice. The young artist had solo exhibitions later that year at Galleria d’Arte Emilio Mazzoli in Italy and in 1982 at the Annina Nosei Gallery in New York, 'Jean-Michel Basquiat' (6 March - 1 April), which effectively launched his career. Equipped for the first time with a studio space and all the materials he needed, Basquiat began to produce his forceful, spirited large-scale canvases for which he became known. He left the Annina Nosei Gallery that same year, and Bruno Bischofberger became his exclusive dealer, proposing Mary Boone as his partner gallery, who represented the artist until 1983. In 1982, the Basquiat was the youngest of 176 participating artists of renowned 'Documenta 7' in Germany, an exhibition which included the likes of Joseph Beuys, Gerhard Richter, Cy Twombly, Keith Haring and Andy Warhol. It was the year in which Basquiat had hit his stride, full of confidence from institutional acknowledgment along with accolades of collectors and peers alike, and armed with blue-chip gallery representation.

Basquiat was an inveterate consumer of knowledge, incorporating a plethora of influences and references into his richly symbolic work. Son of a Puerto Rican-American mother and Haitian-American father, a Brooklynite child of the African Diaspora, Basquiat’s immersion in his rich cultural environment is manifested in the captivating visual feast that the artist creates.

At the age of eight, Basquiat was hit by a car and suffered a broken arm and severe internal injuries. While he was recuperating, his mother brought him a copy of the seminal medical reference Gray’s Anatomy, containing detailed drawings that were eye opening to the young artist. Basquiat’s longstanding interest in this anatomy textbook is reflected in Untitled (Red Warrior), expressed in the continuous white lines that delineate the internal structure of the warrior, skeletonising the otherwise fiery, blood-red figure.

Having at a young age been a frequent visitor the Brooklyn Museum and The Metropolitan Museum of Art in New York, Basquiat recognized a glaring absence of Black representation within the art historical canon. During his travels to Italy to take part in his first solo exhibition in 1981, Basquiat no doubt encountered artworks from Leonardo, Michelangelo, Raphael, Botticelli and other masters of the Italian Renaissance, European history’s greatest dynasty of patronage and influence. In his works, such as Versus Medici, Basquiat would assert forceful visual challenges to the Western art establishment, positioning himself as successor to the artistic throne.

Basquiat’s figures in Untitled (Red Warrior) are in equal parts a nod to the anatomical drawings of Italian masters and a nod to African art and tribal sculptures. Basquiat was a known collector of West African sculptures and masks. The squared foot of the warrior recalls the feet of the Nkisi N’Kondi idols of the Kongo peoples and Yombe group, exemplified by the 19th Century Power Figure (Nkisi N’Kondi: Mangaaka), part of The Metropolitan Museum of Art’s permanent collection. The protagonist’s red, cone-tipped helmet is similar in its shape to the headgear donned by these spiritual sculptures. Further, the mask-like face, almond eyes and elongated nose reveal the influence of Cubism on Basquiat’s forms. Pablo Picasso would incorporate elements of African art into his own work, exemplified by Les Demoiselles d’Avignon (1907) in the Museum of Modern Art’s permanent collection.

A born draughtsman and master of colour, Basquiat’s red warrior absorbs the viewer’s gaze into the heart of the canvas, its blazing pigment combusting into scribbled flames of yellow and red at the site of the figure’s left hand. A vivid response to the coolness of conceptual and minimalist art and the intellectualism of the 1970s, the heat of Untitled (Red Warrior) palpably radiates from the canvas, rapid brushstrokes of pink, grey and black adding a powerful dynamism to the work.

Untitled (Red Warrior) is an authoritative canvas painting from 1982. With very few remaining warrior paintings left in private hands—Basquiat’s most coveted, iconic motif from his significant oeuvre—this painting is an extremely rare, museum-quality masterwork to come to market, the last remaining work from the patron’s private collection. 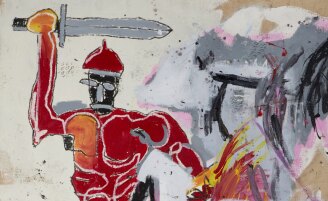