Barrier Breakers: Celebrating 6 Female Artists Who Made Their Mark on Contemporary Art

March brings Women’s History Month – an ideal moment to reflect on the many contributions women have made to art history, and to consider how women are leading in the creative fields today. Celebrating the occasion, Sotheby’s specialists selected artworks by five leading female artists from Contemporary Curated (12 March | New York) and Thinking in Four Dimensions: Leading Women Sculptors (8–16 March | New York).

Lisa Dennison, Chairman of the Americas, discusses sculptures from two leading Modernists: Ruth Asawa (1926 – 2013) and Lynda Benglis (1944 –). First, Dennison examines Asawa’s intricate hanging wire sculpture, entitled Untitled (S.653, Hanging Tied-Wire, Double-Sided, Center-Tied, Six-Branched Form Based on Nature). Executed in 1965, the work is a testament to the artist’s career-long exploration of the relationship between organic and sculpted forms, as well as her ingenious, non-traditional approach to the sculpture process. Born to Japanese immigrants, Asawa grew up in a highly structured environment of chores, school and farm work, and spent mornings tending to her family’s garden. On the onset of the Second World War, when Asawa and her family were forced into internment camps in Arkansas, she found comfort and room for creativity in her high school art classes. While persistent discrimination against Japanese people and discourgementfrom following her dream of becoming an art teacher, Asawa committed herself to developing her art – and ultimately became one of the most innovative, remarkable sculptors of the 20th century.

“These are two women artists who have reinvented the notion of sculpture, drawing upon their own personal histories, but also nature, to create something that occupies a different kind of space than we traditionally see sculpture occupying.”

Around the same time that Asawa completed Untitled, Lynda Benglis arrived in New York. Benglis was interested in exploring post-Minimalist sculpture made from unconventional materials; in the case of Silver Spur, executed in 1987, Benglis metalizes the sculpture with copper, iron and nickel. Like Asawa, Benglis found inspiration for her work in flora – but Benglis, a Greek American, was also influenced by classical Greek sculpture. In Silver Spur, Benglis evokes the lush folds of drapery often found in classical sculpted forms. The artist began receiving wide-spread recognition in the late aughts and today, her work can be found in acclaimed public collections around the world. 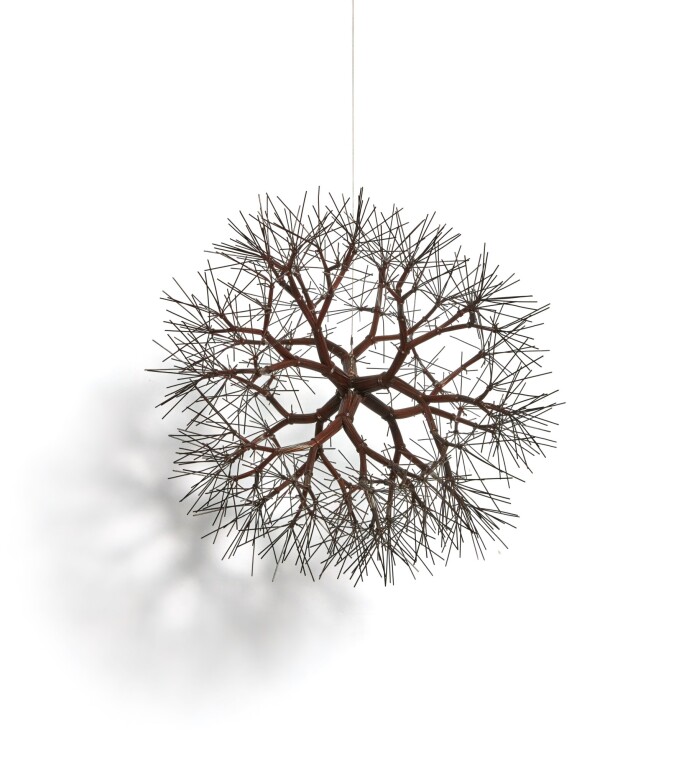 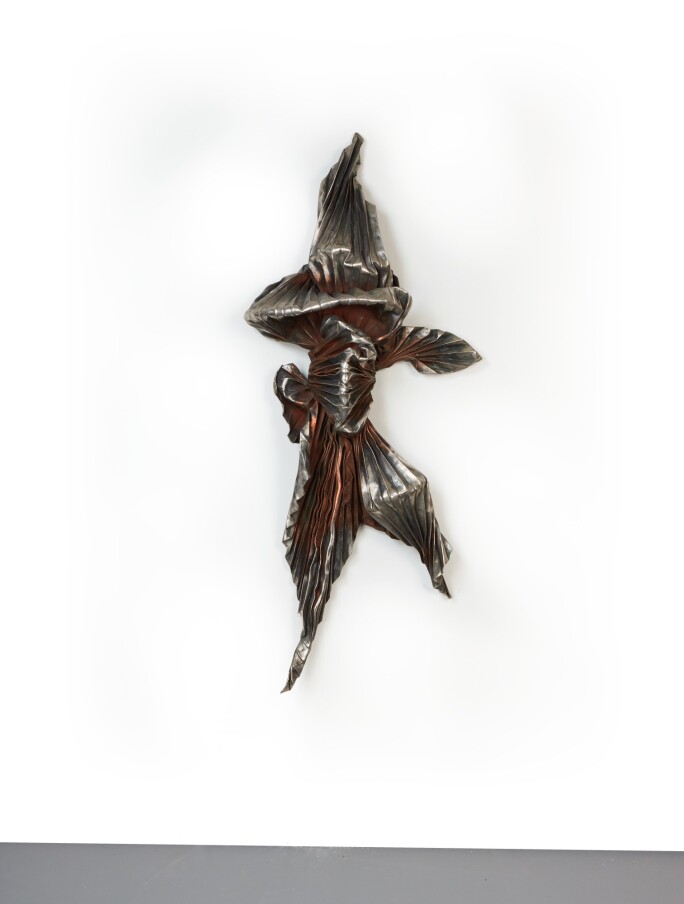 Associate Specialist Kelsey Leonard explores two works by Louise Bourgeois (1911-2010), considered one of the most important sculptors of the 20th century. Both from the Topiary series, which the artist worked on from the late 1990s through the early 2000s, Topiary II, executed in 1999, and Topiary, executed in 2006, are emblematic of the way Bourgeois’s work explores combining human forms, especially the female body, with trees and blooms to represent more internal realities, like trauma and growth. Bourgeois’s personal psychology and struggles form the roots of her artistic themes; her work mines themes of family, motherhood, sexuality and the subconscious, often through the experience of the female body. Throughout her career, Bourgeois struggled with the inherent conflicts of feminism in universal terms and in personal terms, societal norms versus individual choice, anxiety and depression, passivity versus action. These anxieties, thoughts, and opinions are felt in both Topiary II and Topiary, by way of elegant and refined works of sculpture. 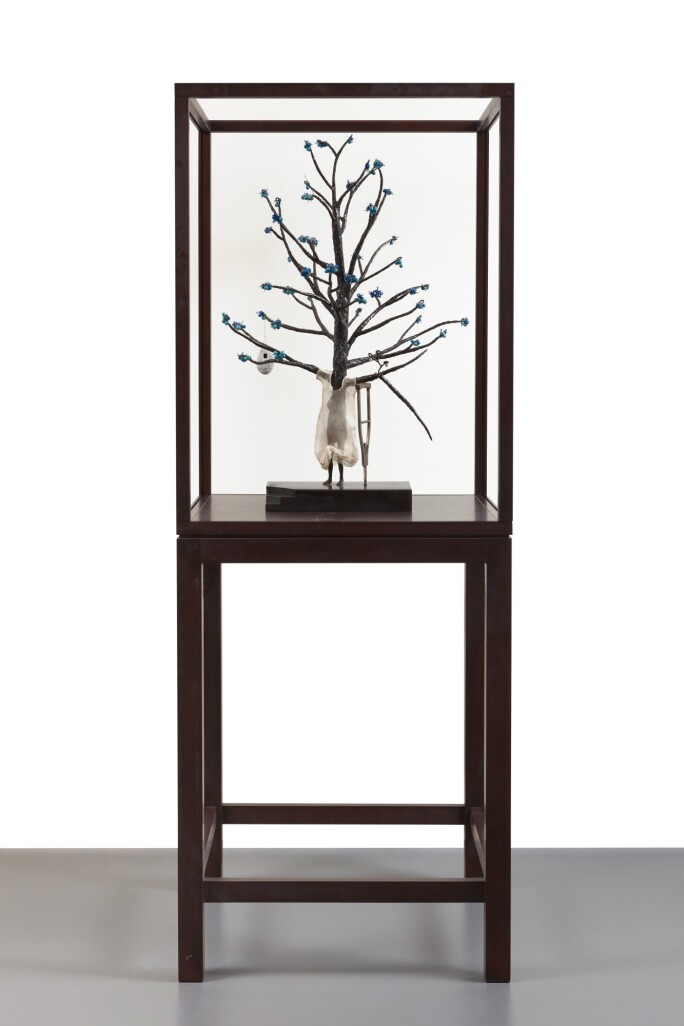 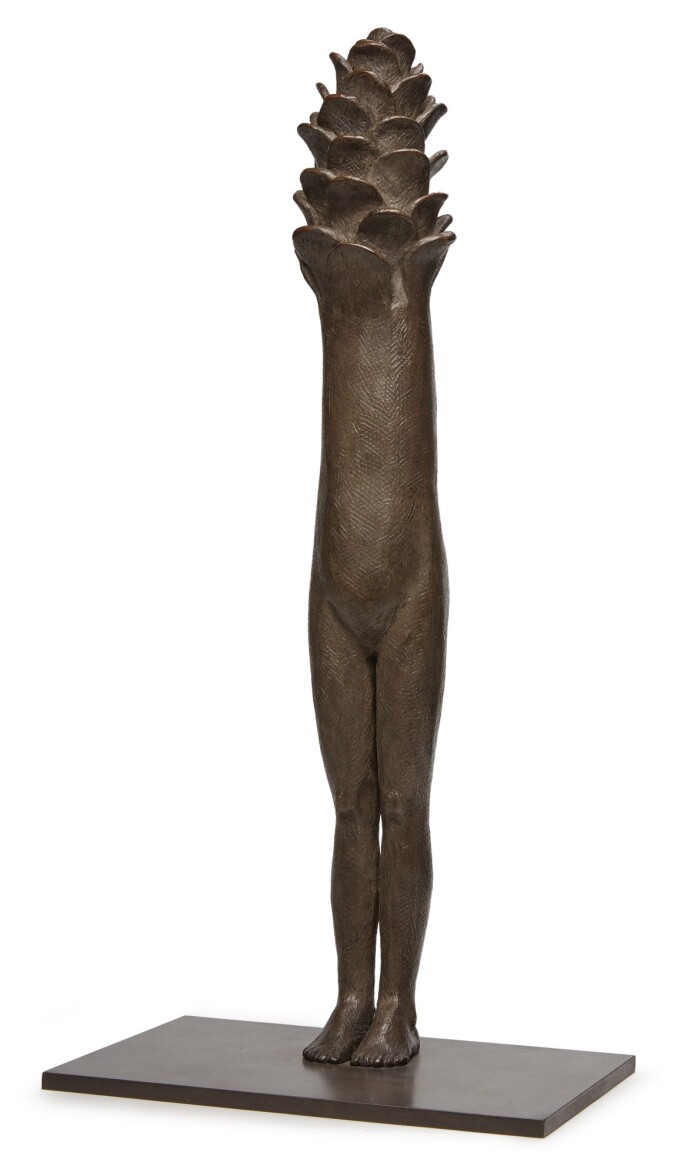 Caroline Orr, an Associate Specialist in Sotheby’s Contemporary Art, introduces a large-scale, explosively colorful canvas entitled Waterfall Series: Painted with the Chinese in Mind, executed in the late 1980s by renowned painter Pat Steir (1940 –). Spanning over seven feet, the abstract painting is an important example from the artist’s iconic Waterfall series. The other half of the title, ‘Painted with the Chinese in Mind’, makes reference to Steir’s careful study of Chinese landscape painting, which found its impetus in Steir’s affinity for Eastern spiritual and philosophical traditions. In Waterfall Series: Painted with the Chinese in Mind, Steir draws specifically upon techniques found in 18th and 19th-century Chinese ink splashing techniques to represent the power and force of falling water and crashing waves.

Steir first rose to prominence in the 1970s New York art scene, following the focus on Abstract Expressionism and during the height of Minimalism. At the time, both movements were dominated by men, and contributions by female artists were often overshadowed – if not completely overlooked. Despite the discouraging social climate, Steir persevered, developing a unique style that set her apart from her male contemporaries and achieving critical acclaim. 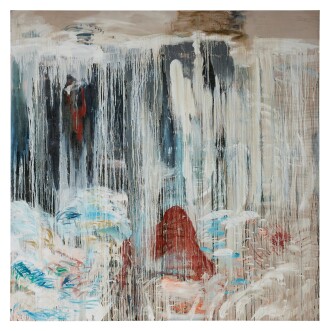 An exquisite work by Marlene Dumas (1953 –), entitled Handy is presented here by Contemporary art specialist Costanze Nogler. Executed in 1999, the painting presents an unfixed vision of the nude female form, one which makes ambiguous questions of control, performance, subjugation and empowerment. Calling upon pornographic imagery, Dumas presents the raw discomfort of nakedness in contrast with the subject's calm, powerful gaze; staring out at the viewer, she remains defiant and commanding, effectively meeting and subverting the stereotypical male gaze.

Raised in apartheid-era South Africa, Dumas moved to Amsterdam as a young adult to study art and psychology – today, the artist continues to live and work in the Netherlands. Dumas’s most celebrated works use the human body to explore notions of sexuality, gender, race and moral alignment, implicating the viewer in an exchange contingent on received notions of good and evil, beauty and ugliness.

Next, Nogler invites us to examine Joan Mitchell’s Untitled, executed in 1967-68. Mitchell (1925 – 1992) was part of the second generation of Abstract Expressionist painters and one of the few female artists to garner acclaim at a time when the art world was dominated by her male contemporaries like Jackson Pollock and Robert Rauschenberg. Untitled is a wonderful example of Mitchell’s signature style – the cool, wintry strokes that compose Untitled are deployed in whiplash lines – precise accelerated gestures – that skate across expanses of white background. The two interior sheets mirror each other, as do the outer two, framing the center. The intentionally left areas of negative space create the impression that the colors and forms are emerging from the ground. Each of the elements have their own logic and autonomy,, coming together in perfect harmony to dance across the canvas. 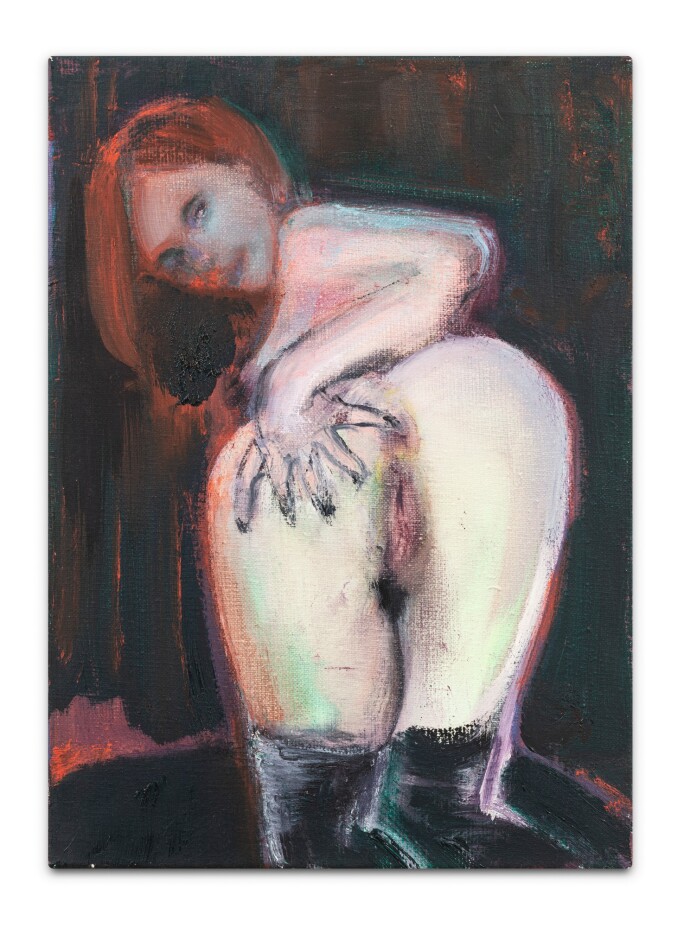