Art Under the Reign of the Kangxi Emperor

A s one of the longest-reigning world rulers and one of the most important emperors in Chinese history, the Kangxi Emperor is celebrated for having built the foundation for the glorious age of the Qing dynasty at the height of its power and influence. The Qing dynasty was founded in 1644 with the conquest of China by the Manchus, who overthrew the weakened Ming dynasty which had ruled China since 1368. The new foreign rulers strategically adopted Chinese administrative practices and reign names, thus establishing a new dynasty that was founded on old principals and established models. Xuanye, who ruled China as the Kangxi Emperor from 1662-1722 was the second emperor of this new dynasty to rule over China, ascending the throne at the premature age of seven following the early death of his father the Shunzhi Emperor (r. 1644-61) aged just 23.

Enthroned so soon following the Qing conquest, the Kangxi Emperor was immediately tasked with the military subjugation of the Ming populace and consolidating power across the realm to legitimize Qing rule. To better equip him to rule over this new multi-ethic empire, he absorbed and learned the many different philosophies and beliefs of the realm. As a ruler with a broad vision and intellectual inquisitiveness, the Kangxi Emperor brought together his own Manchu heritage, China’s longstanding cultural traditions, as well as Western science and technology; all of which are reflected in the arts of his reign, with the Emperor committed to fulfilling his role as a patron of the arts – a duty as well as a privilege for China's rulers.

Art for the Glorification of the new Empire

Keen to explore his new domain and show himself to the populace, the Kangxi Emperor presented himself to his Han Chinese subjects through the six famous Southern Inspection Tours, which took place in 1684, 1689, 1699, 1703, 1705 and 1707.

These stately imperial processions took the Emperor and his extensive entourage southwards to the economic and cultural heartland of China and achieved the dual result of educating the Emperor about the geology, climate, culture and history of the realm, all whilst demonstrating his own imperial vitality and splendor to his new subjects. The Kangxi Emperor employed the best of the southern painters to record and celebrate his triumphant rule, as memorialized by the famous ‘Southern Inspection Tour’ scrolls, representing one of his first acts of artistic patronage.

Consolidation of Manchu power required instruction from the arbiters of Chinese culture. Aware of the weight of Chinese history and the quality of scholarship expected of him, the Kangxi Emperor appointed educated Han Chinese to his court to discuss classical learning and Chinese calligraphy. As an occasional painter and calligrapher, Chinese literature, literary prowess and calligraphy were all of immense importance to the Emperor, who was painted as a traditional Chinese scholar, albeit in Manchu dress, in one of his official imperial portraits. The emphasis placed on scholarship and calligraphy is demonstrated by the expanded appreciation of desk utensils as works of art during his reign.

Porcelain for the Court

The imperial kilns at Jingdezhen had ceased to receive imperial commissions during the turbulent decades of the late Ming dynasty and under the reign of the Shunzhi Emperor. However, they were revived and rebuilt during the Kangxi reign to produce the vast quantities of porcelain required for the imperial palace in Beijing. Ritual and ceremonial wares in porcelain were commissioned for at least six of the imperial temples and small altars. Porcelain was also needed for the Emperor’s official and personal use, as well as for all the extended imperial family and officials. Under the direction of Superintendent Lang Tingji (1705-1712), official ceramics reached great heights of technical excellence. Significant advances were achieved in blue and white porcelains, overglaze enamels (particularly in the famille-verte palette), and in monochrome glazes, most notably copper-red glazes, whose coloration was notoriously difficult to control and which had not been mastered since the early Ming dynasty reign of the Xuande Emperor (1426-1435). The most distinctive of the copper-red glazes was the so-called ‘peachbloom’ glaze produced with copper pigment characterized by variegated red and green tones.

The Kangxi Emperor was naturally inquisitive and scientifically minded, and the arts from his reign reflect a new embrace of technology and techniques. European Jesuit missionaries, who had been in China since the late sixteenth century, exerted a significant influence on the arts and scholarship at the court during this period. Some had gained the patronage of high officials, going on to secure positions within the court. Impressed by their knowledge of mathematics and their expertise in calendrical methods, the Kangxi Emperor was initially well disposed towards these missionaries. However, with Rome’s papal condemnation of Chinese rites of ancestor worship as incompatible with Christian morality, the Kangxi Emperor retaliated, allowing only those with technical skills and knowledge to remain at court. One of his great achievements was the establishment of the Palace Workshops (Zaobanchu), which brought together European artists to work alongside with their Chinese counterparts to produced scientific instruments, timepieces and enameled porcelains for the court. The introduction by the Jesuits of new enamel technology inspired a completely fresh approach to decorated porcelains, metals and glass with the advent of falangcai enamels, which continue to develop during the subsequent Yongzheng (1723-35) and Qianlong (1736-95) reigns.

The arts of the Kangxi period saw a resurgence in works commissioned that conveyed the imperial splendor of the new dynasty, often following closely the Confucian ideals and Han-Chinese aesthetics of previous dynasties. These artworks allowed the Kangxi Emperor to demonstrate ideological and cultural continuities between the Qing dynasty and its predecessors, and to bring attention to the stability and prosperity that the empire achieved under his rule. Simultaneously, his commitment to advancing knowledge in the fields of art, literature, and science is reflected in his efforts to foster dialogue with international guests of the court, the establishment of the Imperial Workshops, and the appointment of adept scholar-officials and superintendents. The new types of scholar’s objects that were produced during his reign, in particular the suite of peachbloom-glazed vessels for the scholar’s desk, are emblematic of the Emperor’s quest for knowledge and the degree of technical and artistic mastery that were achieved under his reign. In these ways, the Kangxi emperor served as a model for governance and for artistic and scholastic patronage that his successors would follow until the end of the Qing dynasty in 1911. 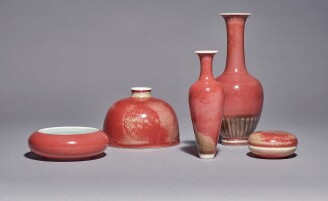