S otheby’s London’s upcoming Prints & Multiples sale traces the evolution of portraiture from the Renaissance to the present day. Liberated from the constraints of noble patronage, the following printmakers freely studied the human body and mind, creating intimate portraits of social life:

The sale will commence with Albrecht Dürer’s own tale of two lovers, The Promenade. A young couple strolls through idyllic countryside, lost in each other’s eyes. The not-so-subtle placement of the man’s sword emphasizes their palpitating lust, while the sprouting flower at left represents their whirlwind romance. Unbeknownst to the pair, a third party looms in the background: Death trails closely behind, toting his hourglass. Rife with symbols, Dürer’s moralizing portrait of an unusual ménage à trois is a modernized memento mori.

Always resourceful, Rembrandt looked no further than the mirror to study the human form. He etched 32 petite self-portraits from 1623 to 1630, mastering both the medium and a heightened sense of realism. Altogether, his etched portraits provide an insightful autobiography. Dated 1630, Self-Portrait, Frowning: Bust depicts a youthful, ambitious Rembrandt on the eve of his prosperous move from Leiden to Amsterdam. His furrowed brow, more quizzical than angry, demonstrates his focus and drive in the studio.

Matisse, who cited Rembrandt as an idol, marveled, “the art of portraiture is the most remarkable” (Matisse quoted in Jack Flam (ed.), Matisse on Art, Berkeley, 1995, pp. 220-221). Inspired by Japanese calligraphy, he spent his mature years creating expressive portraits in black ink and aquatint. Printed with six colorfully inked plates, this rare aquatint of model Marie-José conveys the ease with which Matisse grasped complex practices. While many printmakers simply rely on aquatint as an accent, the Frenchman boldly employed the technique to create a painterly domestic scene.

Printed on blue-grey paper and laid to cream wove during production, Picasso’s inventive lithograph of his beloved partner Françoise Gilot is widely considered his most accomplished. Said to have been the only woman to challenge Picasso, Françoise appears pensive and somewhat skeptical in this representation as she cradles her head deep in thought. Focusing on her wide eyes, inquiring arched brows and full lips, Picasso emphasized both the sharp mind and ravishing beauty of the woman who kept him on his toes.

Draped in a constellation of neon jewels, Warhol’s technicolor Queen Elizabeth II looks every bit the modern monarch. This unique trial proof, drafted for the artist’s Reigning Queens portfolio, is based on the official photograph taken to commemorate the 1977 Silver Jubilee. Using this famous portrait as a source of inspiration, Warhol fulfilled his personal artistic desire: “I really would still rather do just a silkscreen of the face without all the rest, but people expect just a little bit more.” (Andy Warhol in Barry Blinderman, Modern Myths: An Interview with Andy Warhol, Arts, October 1981, p. 145) 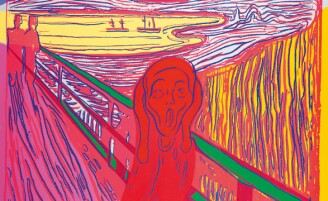