A View of Shanghai's Reinvention as Contemporary Art Hub

By Jing Zhang
Ten years ago, Beijing more than Shanghai was the obvious capital of Chinese art – home to the 798 arts district, China’s most famous studios, and institutions like the UCCA Center for Contemporary Art. However, Shanghai has long been an international touch point of East-West dialogue, and is no stranger to self reinvention and innovation. In the last five to eight years, its rise to the fore of the contemporary arts scene has been fast and most definitely furious.

The groundswell is undeniable. In March this year, collector Qiao Zhibing opened the Tank Shanghai Museum – a privately-owned arts hub of more than 60,000 square meters housed in five gigantic disused oil tankers. This was the latest of many hero projects boosting Shanghai’s contemporary art profile. Then there’s the impressive 2018 Shanghai Biennale, and Photofairs which have run every September since 2014. For the past five or six Novembers, ‘Art Week’ has drawn a flood of industry insiders who travel far and wide to attend Art021, WestBund Art & Design fair, and copious satellite events. There’s wheeling, dealing, musing, networking, and plenty of parties. In the midst of the perpetual clinking of champagne glasses, Shanghai feels electric. 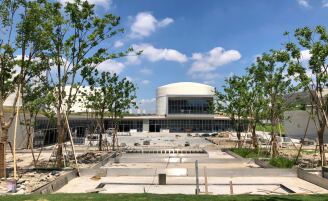 The city’s art boom did not occur by pure happenstance. The government had set an initiative to extend Shanghai from glossy commercial cityscape to a cultural, creative heavyweight. For example, the Power Station of Art is China’s first state-run contemporary art museum, opened in 2012 and has over 440,000 square feet of space. Often likened to the Tate Modern, it also hosts the Shanghai Biennale.

“If we look at the WestBund as a test case for the developing arts scene and market in Shanghai, there’s highly competent government officials and bureaucrats who have done extensive research and seem to be executing a coherent strategy versus in other cities. The efforts in Beijing and other Chinese cities seems less co-ordinated than in Shanghai.”

- Liu Heung Shing, founder of the Shanghai Centre of Photography on the WestBund

Despite the impressive speed and scale of its art boom, Shanghai still has a ways to go to catch up to competitor cities like Hong Kong and Singapore, which were earlier to the game. But always quick to adapt, this October the city opened the new Shanghai International Artwork Trade Center, which specifically aims to smooth out the wrinkles of the local art sales system and encourage more trade.

The stakes are high in the city’s ambitions as a rising arts hub. Massive permanent venues have redefined a new skyline. Shanghai’s November ‘Art Week’ is already a key event on the Asia’s arts calendar, and that will not change anytime soon. Tastes are moving from art that is solidly commercial to the more experimental, a sign of a maturing market. Growth will remain steady as public curiosity for the arts flourishes, while patrons and new collectors continue to emerge in China.