A Reticulated Qing Dynasty Vase That Encompasses China’s Past

H ow to pay homage to as many classic Chinese art styles as possible while creating a symphonic work of art in contemporary taste? If it sounds like squaring the circle, this is what Jingdezhen’s craftsmen achieved with this piece. To any connoisseur versed in the history of Chinese art the reticulated vase featured in a special upcoming auction must appear like a culmination of centuries of ingenuity in Chinese crafts.

Like a stroll through the imperial collection, this vase takes us from archaic bronzes and jades via Longquan celadon and imperial blue-and-white to Rococo flower design.

Its multiple associations spell ‘Glorious Past’ on so many different levels, that even for the expert viewer it takes a while to unravel them all. Like a stroll through the imperial collection, this vase takes us from archaic bronzes and jades via Longquan celadon and imperial blue-and-white to Rococo flower design. What is perhaps most admirable about it – even more than its technical sophistication – is its stylistic coherence, which fuses nostalgic nods to antiquity with fashionable takes on international trends of the day.

The extremely small group of pierced, double-walled vases that were produced for the Qianlong Emperor provided probably the greatest technical challenge ever for the potters at the imperial kilns. The complexity of the production process can hardly be overstated and the perfection of the execution is next to miraculous. Works like these could have been developed by the imperial kilns only under the leadership of Tang Ying (1682-1756), who combined superior understanding of the properties of the ceramic medium, vast experience with the intricacies of the production process and an unerring sense of aesthetics, with exceptional ambition.

These vases, however, appear to have provided cause for concern even to Tang Ying. After having presented nine single vases, respectively designed with openwork or interlocking sections, Tang reported to the Emperor that he had not dared to create larger numbers or pairs, since they are so expensive (for which read: prone to endless failures) and would do so only if the Emperor accepted them. The Emperor replied that he ought indeed to keep numbers low and restrict their production to special occasions, but nevertheless ordered pairs to be created for the singles. Many reticulated vases, however, do not have pairs today and may never have had pairs, as no such delivery from Jingdezhen is expressly recorded in the archives.

Eunuch Gao Yu, as proposed by Treasurer Bai Shixiu and Deputy Foreman Dazi, presented two yangcai zun vases with lingzhi, exotic flowers and cicada, a yangcai red-ground sgraffiato winter-green reticulated flower vase with a Xuande-style inner body [… and thirty-four other vessels]… His Majesty praised these porcelains as top-quality (toudeng) masterworks and ordered them to be stored within tailor-made fitted boxes at Qianqinggong.

Archival records from the Qing imperial household, dated on the twelfth day in the eighth month, seventh year of Qianlong (1742)

The National Palace Museum, Taipei, holds three related reticulated vases, very similarly pierced and enamelled in the same basic colour scheme as the present piece, but of pear shape, without handles and rim collar. (fig. 1). Liao Pao Show states that the pair was once displayed in the Duanningdian, the Hall of Solemnity, a side hall in the Inner Court, where the Emperor’s robes were stored, and the single vase in the Yangxindian, the Hall of Mental Cultivation, the Emperor’s personal living quarters.

Archaistic motifs drawn from the Bronze Age were highly popular in the Qianlong period. Interlaced dragon designs appeared in bronze casting in the early Eastern Zhou period (770-256 BC), when ritual bronzes became more and more ornate and the technique of lost-wax casting was introduced. Openwork designs of dragon or serpent-like creatures are found particularly on vessel covers and handles, but also as fanciful vessel ornament. In the 6th century BC, such motives appeared also on two-layered bronze vessels with a closed inner and a pierced outer wall (fig. 2).

While the interlacing of highly stylised dragon figures was probably inspired by such bronze vessels, the rendering of the dragons themselves on this and related porcelains is more closely related to jade carvings. A typical feature of Eastern Zhou jade dragons are the almond-shaped eyes with outlines protruding at both ends, which we also see here. With their bent horns and split tails, the dragon handles in any case seem to take jade pendants as models. The term “linglong” itself, which is used for reticulated porcelains, refers basically to something that is exquisite and elegant, like fine jade pendants.

Tang Ying’s reticulated vases obviously were meant to draw all the registers of the potters’ craft, therefore the inner walls had to hold yet another surprise. The fact that they are painted at all is astonishing in itself. An underglaze design was an obvious choice for the inside, since it could be fired in the first high-temperature firing together with the celadon glaze and the neutral glaze that covers the remainder of the vase, and thus was ready and done when the enamels were applied on the outside and further firings followed. Yet the design is not easy to make out, since it is largely hidden by the intricately carved ‘window’ in the wall around it.

Was Tang Ying here striving to engage the Emperor’s attention? He must have made the Emperor come up close in order to glance inside, and to strain his eyes in order to discover the vase’s secret. Once he had connected the small sections of the pattern that are visible through the narrow openings, the Emperor could only have been pleased. Recognizing an unmistakeable Ming (1368-1644) design from the time of the finest blue-and-white porcelains, the Xuande period (1426-1435), he had experienced a glimpse into the past. The various references to earlier periods in this vase all insinuate the natural continuation and patronage of Chinese culture by the Manchu Qing dynasty (1644-1911), but this physical incorporation of a ‘Ming vase’ into a Qing vessel symbolised even more explicitly that this ruling house encompassed China’s eminent past.
The vase here offered has a notable history. It can be traced back to the 1950s, when it belonged to Sir Harry M. Garner (1891-1977; fig. 3), a distinguished English mathematician and scientist working in aerodynamics, and a major collector and historian of Chinese art, who for many years was Secretary and later President of the Oriental Ceramic Society (OCS), a celebrated society founded in London in 1921.

For a closer look or to read more about the fascinating provenance of this piece, the full version of this article is available here. 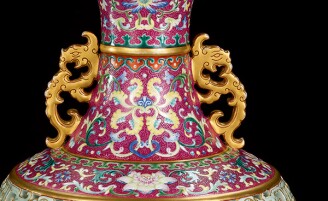