A Rare & Coveted Diamond Discovered at a Car Boot Sale

As we begin a new season of auctions across our luxury and fine art categories, the Sotheby's Pricing Platform continues to drive estimates, valuations and exceptional results for our clients, in every collecting category. Here, we look back at the remarkable story of how a diamond bought for £10 at a car boot sale in the eighties sold for more than £650,000 at Sotheby's in 2017.

F or many decades, almost every weekend morning through Spring and Summer in England, scores of people arrive in car parks, school playgrounds and sports fields to lay out tables of pre-loved wares for keen, eagle-eyed collectors. In 2019 it was estimated that 45,000 car boot sales happen each year, with 13 million shoppers making purchases.

They are the epitome of “one person’s trash is another person’s treasure” where you can find anything from vintage clothing and furniture to classic 80s children’s toys and pristine unused sports equipment. Any given sale is packed with miscellaneous ornaments, vases and antiques handed down through families.

Occasionally though, you might even discover an actual treasure... whether you realise it or not.

In the late eighties, this is exactly what happened to one woman browsing at a routine car boot sale held at the West Middlesex Hospital in Isleworth, West London. Nestled in a box of costume jewels, the cocktail ring wasn’t even the thing that caught her eye; she was actually more interested in some bangles. But as so often happens at a car boot fair, the box was sold as a job lot and the ring went home with her.

A regular attendee of local sales, she wasn’t hunting for hidden treasures; rather, she just bought what she liked the look of. But she did loved to negotiate and haggled the seller down from £12 to an even £10 for the whole box, including the replica ring. It might have been a gobstopper of a gem but it didn't sparkle like one: sitting in a rusty, old setting, it looked dull and filthy – certainly nothing special.

In its new home, the ring once again ended up in a box of trinkets and, forgotten by its new owner, it stayed that way for almost three decades somehow surviving through eight house moves where other possessions were thrown out or lost along the way.

It was only in 2017, thirty years after that unremarkable car boot sale purchase, when the owner was cleaning her spare room and an old jewelry box fell onto the floor, that the ring rolled out and caught the light, prompting her to wonder if it might be worth a little more than she had realised.

Without particularly high hopes, she took it along to a local jeweler who immediately knew that he was looking at something special. Not only did he suspect it was a real diamond, but it was too big even for him to measure the carats accurately. When the owner followed up by calling Sotheby’s to arrange an appointment, she still had no idea of its true value.

Because this wasn’t just any diamond.

At an enormous 26.27 carats, the cushioned shaped jewel, with a colour grade of I and an impressive clarity grade of VVS2, was a spectacular example. Once Sotheby’s had the diamond confirmed as genuine by the Gemological Institute of America (GIA), the story of the car boot sale find – suitably nicknamed the “Tenner” diamond – went viral, making international headlines. When it went under the hammer in Sotheby’s London showroom, the estimate was £350,000.

In fact, the frenzied bidding ultimately saw the stone sold for an incredible £656,750, a life-changing sum for the owner who has described the experience as “a real-life Only Fools and Horses story”.

It remains a mystery how such a stunning diamond came to be sitting amongst trinkets on a car boot sale table that fateful day, but Sotheby’s Jewelry have been able to posit a few theories about why the ring might have gone unnoticed.

Firstly, the dark and tarnished mount was the last backdrop to show off the true potential of the jewel. And secondly, the cut of the diamond did it no favours. In the 19th century, when experts believe the jewel originated, it wasn’t common practice to cut diamonds to emphasise their brilliance, as they are today. As Jessica Wyndham, Head of Sales for Jewelry in Europe, explains, “with an old style of cutting, an antique cushion shape, the light doesn’t reflect back as much as it would from a modern stone cutting.

“with an old style of cutting, an antique cushion shape, the light doesn’t reflect back as much as it would from a modern stone cutting. Cutters worked more with the natural shape of the crystal, to conserve as much weight of the crystal rather than make it as brilliant as possible.”

Cutters worked more with the natural shape of the crystal, to conserve as much weight of the crystal rather than make it as brilliant as possible.” In this case, the antique cushion shape is deeper and duller than modern cuts, designed to be viewed in candlelight which would coax out the inner light rather than reflect its sparkle.

At the time of sale, Wyndham said: "It was a thrill to bring the hammer down on an object that has been the subject of so much interest and attention over the last few weeks and to see that attention translate into such strong bidding competition."

The “Tenner” diamond’s vendor remains a regular attendee at car boot sales, knowing better than anyone that treasures may be hidden in the unlikeliest of places. As the popularity of buying and selling secondhand goods rises, much of the market has moved online, to auction sites. But as this story shows, there is no substitute for rummaging around on a trestle table in a car park on a chilly Sunday morning and buying things because they catch your eye rather than because they might be worth something. After all, they might be both. 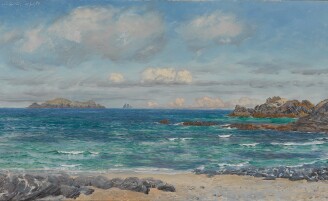 Auction Results
A Year of Discovery at Sotheby's
Jewelry Collectors