A Powerful Chief of the Ojibwa People

S otheby’s sale of 19th & 20th century sculpture brings a variety of Neoclassical, Romantic and Modernist statuary to the market. This year’s sale, which is led by a great selection of Italian Romantic marbles, also includes a very rare and intriguing bust of a Native American, called Aysh-ke-bah-ke-ko-zhay and nicknamed Flat Mouth.

The bust is a variant on the bust of Flat Mouth currently on display in the United States Senate (inv. no. 21.00001.000). A powerful chief of the Ojibwa people in the Leech Lake area (present-day Minnesota), his name translates as 'bird with the green bill'. His nickname, Flat Mouth, derives from an English translation of the French Gueule Platte, as he was called by French traders.

Flat Mouth visited Washington DC in 1855 to negotiate land treaties. He was a member of an Indian delegation from the Midwest that also included Be sheekee, or Buffalo, another Ojibwa leader. Flat Mouth negotiated the cession of more than ten million acres in north-central Minnesota, a land package that included the headwaters of the Mississippi River. Both Ojibwa chiefs, Aysh-ke-bah-ke-ko-zhay and Be shekee, sat for portraits by Francis Vincenti. Flat Mouth is likely to have been around 81 years old in this portrait. Be sheekee's bust is also in the collection of the Senate, inv. no. 21.00002.000. Vincenti, a relatively unknown sculptor of Italian descent, is known to have worked as a stone-cutter on the decoration on the U.S. Capitol between 1853-1858. He would most likely have conceived the portraits of Flat Mouth and his fellow Chief in clay. An apparent purpose of asking the two Native Americans to sit for portraits was to provide Thomas Crawford (1814-1857; see lot 9 by this sculptor in the present sale), the lead sculptor and architect of the U.S. Capitol building, with models for realistic depictions of Native Americans in some of his sculptural groups.

Very little other information is known about the sculptor Francis Vincenti. He is recorded to have moved south, to Richmond, Virginia, where he worked for Edward Valentine. He later moved to Paris, and probably worked on some of the remodelling of the city during Napoleon III’s time.

The bust in 11 December’s sale is very similar to the Senate’s bust, but is modelled differently at the bottom and includes a socle. Although records show that the two busts by Vincenti in the Senate were completed in late 1855 or early 1856, this bust is dated 1857. The bust is being offered for sale by a British public institution, where it was previously mis-identified as a bust of Dante. It is unknown how the bust entered their collection. Intriguingly, there is a letter in the archives of the U.S. Senate which is dated 1866, which mentions a ‘British Minister’ who showed an interest in the bust of the Native Americans. Although the letter mentions the Minister looking to have copies made of these busts, it is of course possible that he managed to acquire the present dated version and brought it with him to the UK. Francis Vincenti must have executed a second version of the bust, which was unrecorded until now. The sale of the present bust presents an opportunity to acquire a rare portrait in marble of a Native American chief. 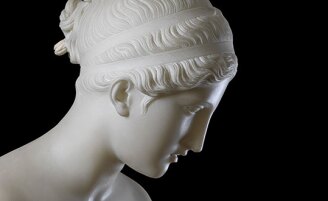