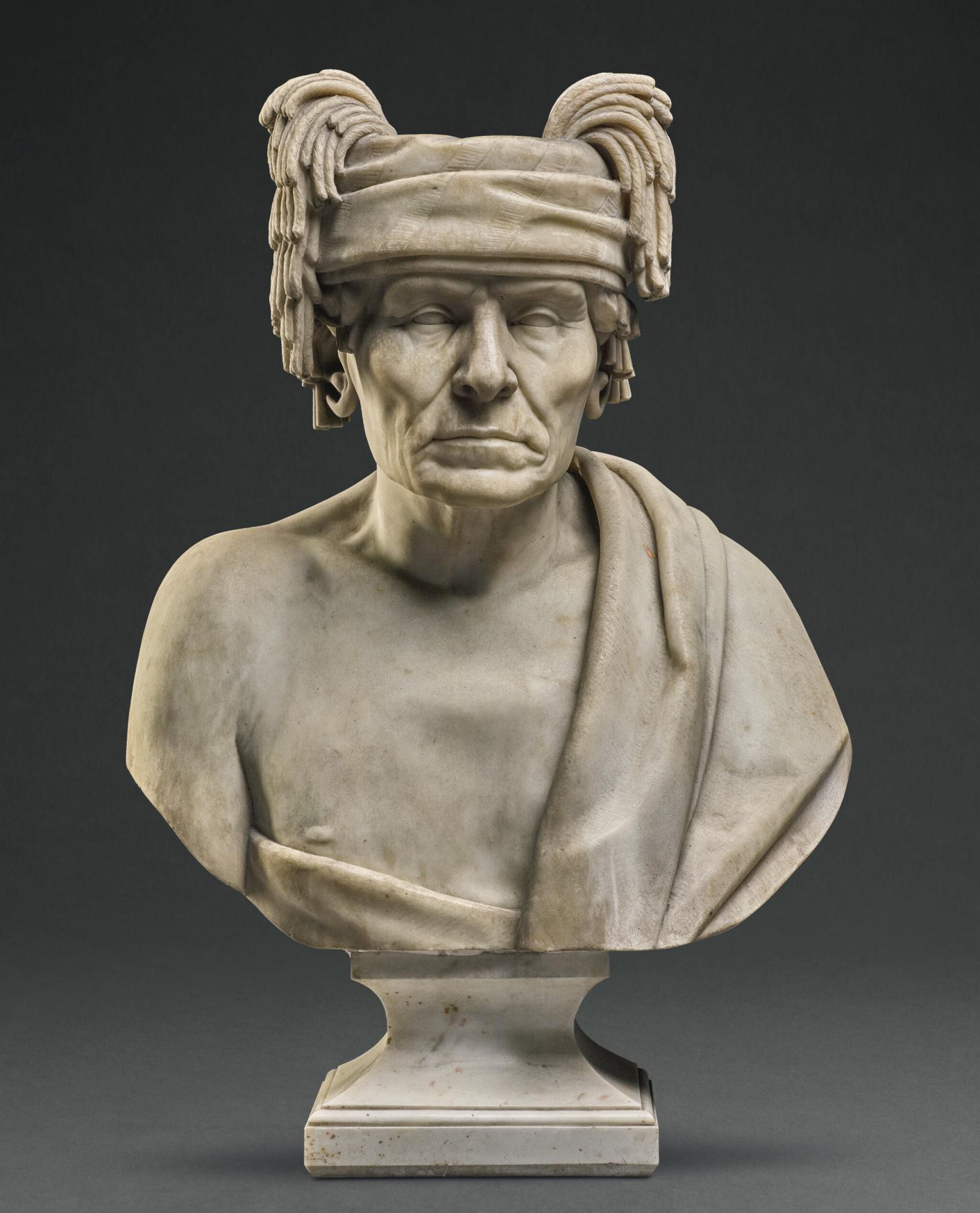 BUST OF AYSH-KE-BAH-KE-KO-ZHAY, OR FLAT MOUTH, AN OJIBWA CHIEF

Overall the condition of the marble is very good with minor dirt and wear to the surface consistent with age. The quality of the carving is very fine and generally very well preserved. There is dirt to the surface and the marble would benefit from a professional cleaning. In a few areas water has dripped through the dirt leaving marks, in particular to the top of the hat and back of the neck (this should be removed during cleaning). There is natural veining to the marble consistent with the material, including a stable slightly open vein to the proper right shoulder and back of the neck. There are a few minor pencil marks including to the upper lip and throat.

The present intriguing bust is a variant on the bust of Aysh-ke-bah-ke-ko-zhay, or Flat Mouth, currently on display in the United States Senate (inv. no. 21.00001.000). A powerful chief of the Ojibwa people in the Leech Lake area (present-day Minnesota), his name translates as 'bird with the green bill'. His nickname, Flat Mouth, derives from an English translation of the French Gueule Platte, as he was called by French traders.

Flat Mouth visited Washington DC in 1855 to negotiate land treaties. He was a member of an Indian delegation from the Midwest that also included Be sheekee, or Buffalo, another Ojibwa leader. Both chiefs sat for portraits by Francis Vincenti (Be sheekee's bust is also in the collection of the Senate, inv. no. 21.00002.000), a relatively unknown sculptor of Italian descent. Vincenti is known to have worked as a stone-cutter on the decoration on the Capitol between 1853-1858, and probably moved to Paris later, after a brief period in Richmond, Virginia. The two busts by Vincenti in the Senate are not dated, but records suggest they were completed in late 1855 or early 1856. A bronze variant of Be sheekee's bust is known to have been made in 1858.