A First Glimpse of the Library of Hubert Heilbronn: The Quintessence of Bibliophilia

S o here a library emerges, little known yet already famous. Hubert Heilbronn has decided to fill a basket with fruit from his immense orchard and to present it, to the delight of his fellow bibliophiles in the sale Bibliothèque littéraire Hubert Heilbronn on 11 May.

Heilbronn is not the only one to have done this; one can turn to Nodier, Pixerécourt, Baron Pichon. Each of these collectors must have found themselves confronted with a difficult choice (one that would never occur if selling an entire library). Which volumes to choose and to what end: the success of a first sale, the reputation of the rest of the library, the replacing some of the editions by better ones, or a simple pruning?

From the outset, book lovers will discover a remarkable selection, a portion of an important library judiciously constructed. The criteria for selection are not organized by theme (history, poetry, fiction, fine arts), nor by period, nor by the nature of the object itself, nor by the typical criteria of first edition, binding or inscription. Instead, these criteria overlap in many of the lots in the catalogue, including books that have been enriched with extra-illustrations or by accompanying autograph letters, with occasionally a recent taste for a plain book, presented “as issued”, in its original covers.

A constant that is to be found in all of the lots is the bibliophilic quality that will appeal to the connoisseur. It results from the literary interest of the work, from the discovery of its provenance, from the always interesting relationship between the author and the person to whom the work is dedicated, from the handwritten corrections and annotations and from the additional documents. All the books are singular, because they are situated from a chronological, literary and personal point of view.

Some examples to illustrate this point: La Vie de Saint Louis by the Abbé de Choisy, 1689, with the coat of arms of the Regent and the ex-libris of Georges Pompidou; Madame de Staël, De l'Allemagne, 1814, annotated by Stendhal himself; Chateaubriand, on the subject of the death of the Duc de Berry, 1820, with the coat of arms of the Duchesse de Berry, with four letters from Chateaubriand and the royal family relating to the event; a first edition of Balzac’s La Princesse de Cadignan, 1840, bound for the author and later owned and annotated by Paul Bourget; Alexandre Dumas, L'Orestie 1855, inscribed with the moving dedication; "à la mort et à l’exil, au duc d’Orléans et à Victor Hugo". ("to death and to exile, to the Duke of Orleans and to Victor Hugo").

The books presented in the sale are not only noteworthy for their bibliophilic quality, but also because they very clearly reveal the collector’s own literary choices. It is quite obvious that Heilbronn's favourite author is Marcel Proust: twenty six lots in the sale catalogue are devoted to him, including the rare magazine Le Banquet, 1892, containing in its eight issues, eight articles by Proust where one can see “le germe de la 'Recherche'” (“the seeds of the 'Recherche'"). Is there any more moving memento than the Du côté de chez Swann, 1913, given by Céleste Albaret to Jacques Guérin, who bound it in fabric taken from Proust's own bedspread? And there are many other editions and manuscripts that offer the privilege of insight into the author, his creation and his relationships.

The second favorite writers are undoubtedly Stendhal and Victor Hugo. Both appear with prestigious first editions and handwritten letters. The former is represented by the Goncourts’ copy of La Chartreuse de Parme, 1839, and the first edition of Le Rouge et le Noir accompanied by a letter to his friend Fiore who served as a model for one of the characters in the book; the latter with the Nouvelles odes, 1824, dedicated to Vigny, Les Orientales, 1829, dedicated to David d'Angers, Littérature et Philosophie mêlées, 1834, dedicated to Sainte-Beuve, together with inscriptions and especially letters to Juliette Drouet.

It is necessary to stop there before we are overwhelmed but additional favourites are Balzac, Barbey d'Aurevilly, Mérimée, Verlaine and more recently, Apollinaire, Aragon, Valéry, Breton, Cocteau, René Char, Julien Gracq.

A distinct and assured literary taste can be deduced from this brief preview but that is not all. One must add to it the work of research and documentation: the understanding of the importance of enriching the work with corrected proofs, the “paperoles” of Paul Éluard, the bindings, including those by Jean de Gonet; the drawings and the engravings.

Perhaps most interesting is that which is absent from the sale. What is important is not the appearance of the volumes but the selection of the books, the joy of choice and the admiration of the works. The entire Hubert Heilbronn Library is not revealed. What is presented here is a bouquet with its own perfume, a message of affinities, an invitation to travel into literary creation, certainly the quintessence of what it means to be a bibliophile. 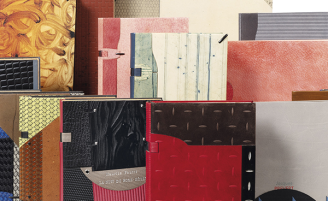