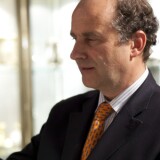 Thierry de Lachaise joined Sotheby’s France in January 2001 as Director of the Silver department and organised and developed the first Silver sale held there. Since 2003, he has also been responsible for the Silver sales at Sotheby’s Italy.

He began his auction career in Geneva in 1991 and has helped establish several records for Silver at auction while nurturing a large client base of international collectors. He has valued some of the most important collections on the Continent.

Mr de Lachaise is a frequent lecturer and writes about Silver for the French and Swiss press. He is the author of L’Argenterie de Lyon et Trevoux du XV au XX Siècle.