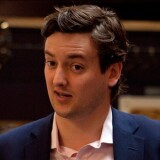 Julian Gascoigne, Director, Early British Paintings, joined Sotheby's in 2007 after completing a Masters degree in History and History of Art at Edinburgh University. For the past five years Julian has been responsible for cataloguing, business acquisition and sales for Early British and Old Master Paintings sales in both London and New York, during which time he has developed a deep understanding of this market, and established relationships with collectors worldwide.

Julian has been instrumental in helping to establish Sotheby’s dominance in the Early British paintings field, recent highlights of which have included the sale of Turner’s Modern Rome – Campo Vaccino for £29.7 million in July 2010, the current record for the artist and the highest price for any British work of art at auction, and setting a new auction for Johann Zoffany in December 2011, at £6.8 million. Julian was also heavily involved in achieving the two other highest prices for Turner in the past five years, Pope's Villa at Twickenham, which sold for £5.4 million in London in July 2008, and The Temple of Jupiter Panellenius Restored, which sold for $13 million in New York in January 2009. Julian was also responsible for the sale of Van Dyck’s Self Portrait, which established a new world record for the artist in London, in December 2009, when it sold for £8.3 million.