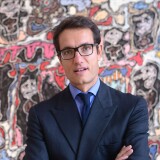 Grégoire Billault joined Sotheby’s Paris in September 2000 as an expert in the Contemporary Art department and was appointed Head of the department in October 2004.

He played an important role in the successful sale of the collection Le jardin secret de Marianne et Pierre Nahon (Venice, July 2004) and consigned the landmark Collection of Lilianne and Michel Durand Dessert (Paris, October 2005). In July 2006 he launched the Contemporary Art various-owner sales in Paris, establishing world records for leading French postwar artists including Soulages, Morellet, Calle and Raysse. In November 2007 Francis Bacon’s Portrait of Muriel Belcher sold for €13 million, the most expensive Contemporary work of art sold in France at that time.

He also secured the consignment of Bacon’s Tryptich, 1976, which sold for $86 million in May 2008 in New York, the most expensive Contemporary work of art ever sold at auction.

Prior to joining Sotheby’s Mr Billault worked for three years in two Paris galleries, Galerie Obadia and Galerie Xippas, and for two years in the London gallery Faggionato Fine Arts where he was involved with the Francis Bacon Estate.

Mr Billault graduated with a Bachelor of Arts degree.