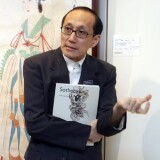 C. K. Cheung joined Sotheby's in January 1996 as Head of Chinese Paintings Department. Based in Hong Kong, Mr. Cheung is mainly responsible for the collection, authentication and appraisal of paintings and calligraphic works for auctions.

Mr. Cheung is the foremost expert in the field of modern and contemporary Chinese paintings, and his views have been highly regarded by collectors and connoisseurs. Mr. Cheung is well versed in classical Chinese texts and literature, and believes that the artistic aspects of traditional Chinese paintings cannot and should not be separated from its literary aspects. The poetry, the calligraphy, the painting and the artist's seal are independent yet interlinked elements which should be appreciated and understood as a whole.