S otheby’s New York is pleased to present our Important Watches sale, 9 December, 2021. Our sale is finely curated and celebrates a wide variety of vintage and modern timepieces, many of which are being offered for the first time at auction and come to us from private collections. Of extraordinary note and coming directly from the family of the original owner, is a pristine Patek Philippe reference 1518, pink gold chronograph wristwatch with pink dial that was purchased by purchased by Prince Tewfik Adil “T.A.” Toussoun of Egypt on the 20th July 1951. Given the iconic and historic nature of the reference 1518, the offering of this example in such outstanding and extraordinary condition and with Egyptian royal provenance presents a unique opportunity for any collector to acquire Patek Philippe’s first perpetual calendar chronograph wristwatch in a state near to that of when it was fresh from the factory.

Patek Philippe x Tiffany & Co: One of the Most Coveted Partnerships in Horology

Patek Philippe’s entire lineage of perpetual calendar chronographs starts with the reference 1518 launched in 1941, World War II at the Swiss Watch Fair in Basel. The reference was not only Patek Philippe’s first serially produced perpetual calendar chronograph wristwatch, but the first of its kind from any brand, earning the reference its well-deserved place in horological history and setting the standard of haute horology for the decades to come.

In accordance with period tastes, Patek Philippe cased the majority of the 281 total examples of the reference in yellow gold, while only 58 examples believed to have been cased in pink gold. Of these 58 examples, an exceedingly scarce few were configured like the current example. When cased in pink gold, the reference was most commonly fitted with silvered dials, with only a select few wearing matching pink dials. The end result of this subtle adjustment is a warm attractive aesthetic, unique to this variant. To date, the market has seen only 13 of these ‘pink on pink’ examples, this becoming the 14th. known.

As might be expected, the reference 1518's significance and renown was not lost on collectors throughout history, with the world’s most important collectors as owners including Henry Graves Jr and celebrities such as Sugar Ray Robinson. The references association with royalty has been well established too, with owners including the former ruler of Romania, King Michael I, the King of Jordan, and Egypt’s penultimate ruler King Farouk I.

Coming directly from the family of the original owner, the current example of Patek Philippe’s legendary reference 1518 perpetual calendar chronograph was purchased by Prince Tewfik Adil “T.A.” Toussoun of Egypt on the 20th July 1951. Born on April 18, 1925 into Egyptian royalty in Cairo, Prince Tewfik was a direct descendent of Mohamed Ali (4 March 1769 – 2 August 1849) considered the founder of modern Egypt, first cousin to Egypt’s tenth and penultimate King of Egypt, King Farouk I.

Testament to the care and love Prince Tewfik had for his extraordinary watch is the fact that he retained the original Certificate of Origin, Operating Instructions and its box, all in immaculate condition for his entire life. This original Certificate of Origin from Patek Philippe is dated July 25th, 1951 as the date of purchase, confirmed on the extract from the archives. Scholarship suggests that this is the only pink on pink reference 1518 to be offered with its original certificate of origin. Taking all factors into consideration, it wouldn’t be an overstatement to deem this a true museum worthy timepiece. For this we have to thank the extreme care and infrequency of handling which defined the Egyptian Prince’s lifelong ownership of this important wristwatch.

Released in 2017, this important modern reference was first introduced to celebrate The Art of Watches Grand Exhibition, Patek Philippe’s 10-day New York retrospective of works old and new. In honor of the occasion and the location of its hosting, the manufacture fitted 10 total examples with cloisonné enamel dials created by the celebrated artist Anita Porchet depicting two versions of New York’s iconic skyline in day and night time colors. This present lot is fitted with the “New York by Day” dial seen on just 5 of the produced examples, which is traced by a rose gold 24-hour indicating disk, along with a city disk crafted from German silver.

Beneath this elegant and bold exterior lies the mechanical sophistication of this timepiece, the Cal. R27 HU movement. As complicated and expertly finished as you would expect from Patek Philippe, the reference specific movement is distinguished by how the world time function can be used in tandem with the minute repeater. Unlike traditional executions of the complication, where both function independently of each other, the caliber is capable of chiming a local time set using the pusher on the 2 o’clock position on the case’s side. This allows the wearer to easily keep track of their home time zone, while enjoying the chiming local time of wherever they may be.

One of the most desirable types of wristwatches to come to market are those with two signatures featured on the dial. To date, one of the most coveted and appreciated relationships in the horological community lies between Patek Philippe and Tiffany & Co. The iconic Jeweler began retailing Patek Philippe wristwatches in 1851 and remains the firm's longest retailer and partner. 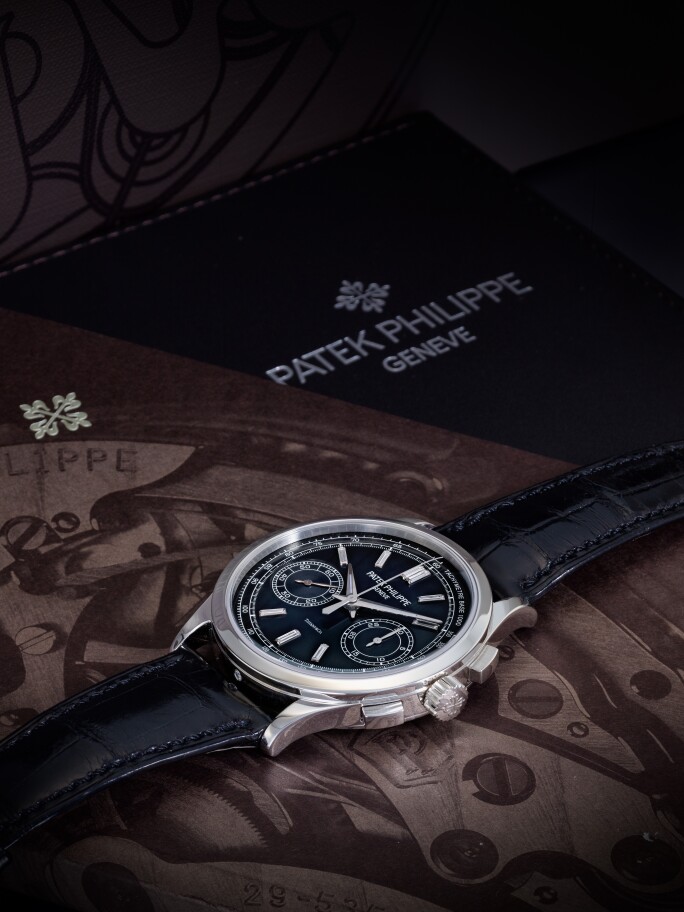 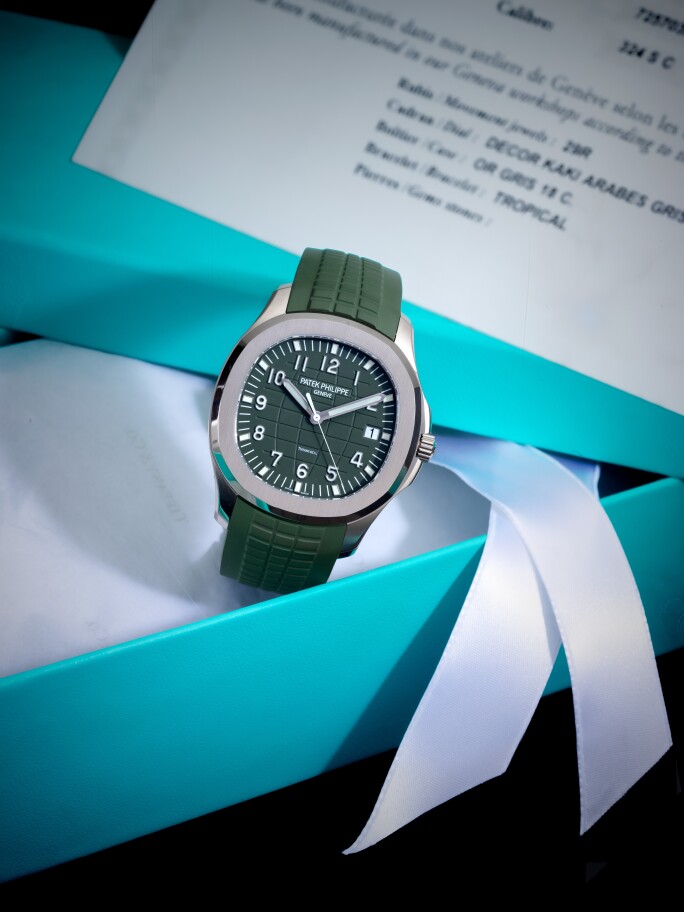 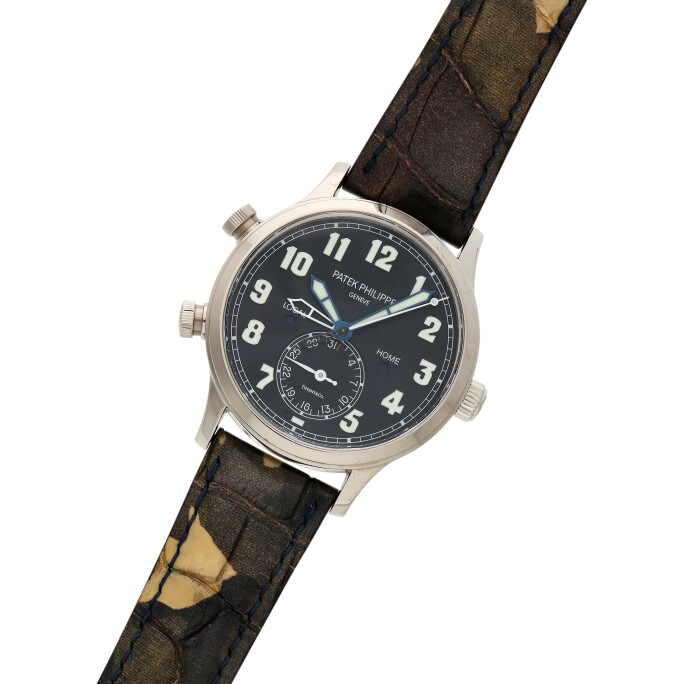 The Rolex Submariner 6536 stands among some of the most important and desirable Rolex models ever produced.

Like the Reference 6538, both models are often nicknamed the ‘James Bond’ although, strictly speaking, the 6536 never appeared in the film. Pre-dating the introduction of crown guards, the 6536 is characterized by its thinner profile, no crown guard case, and small crown. The 6536 was only produced for about two years between 1956 and 1958, making this model one of the most captivating opportunities for collectors of early Rolex wristwatches.

The present lot is offered from the original owner, Mr William Gray, a venerable Renaissance man whose service and cultural endeavors have taken him around the world with this trusted chronometer.

William Gray began active duty in 1957 as member of the US Air Force. Gray was assigned as a Navigator to the 421st Aerial Refusing Squadron at Yokota Air Base, Japan, and there he sought out a watch that would keep better time than his Air Force issued timepiece. At the Base Exchange, this 6536 caught his eye and he paid a hefty price of $85.00 USD for it in 1958. Today’s adjusted inflation value would be just over $800.00 USD, a large sum to commit for a young 1st Lieutenant. 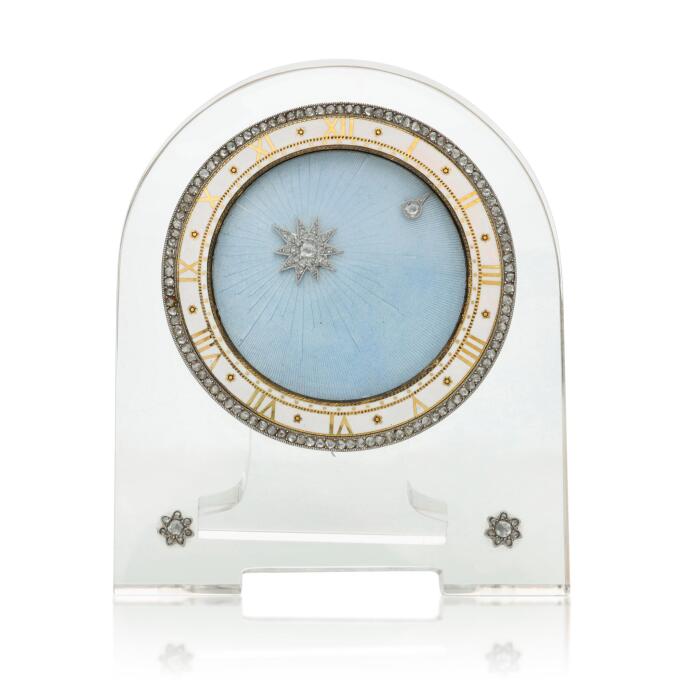 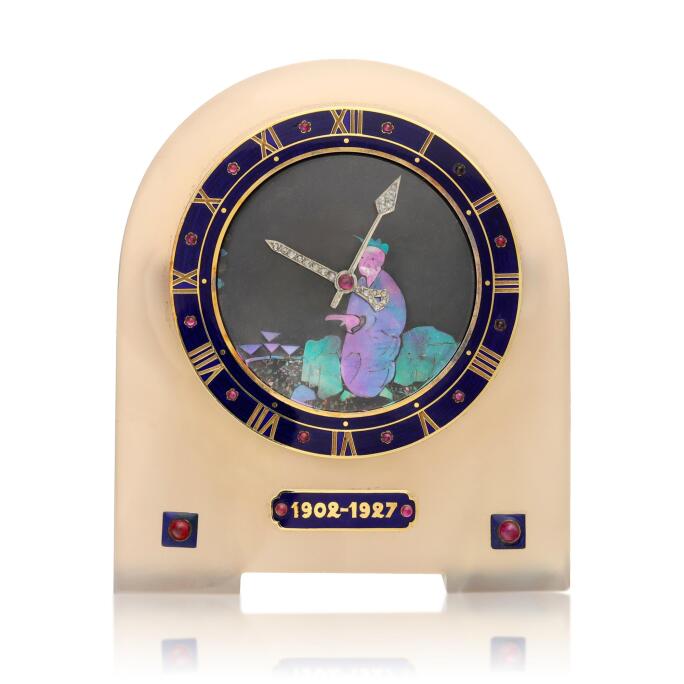 Sotheby’s is pleased to offer two stunning and complimentary desk timepieces by Cartier.

From 1919 to 1936, Cartier created some of the world's most extraordinary clocks highlighting their mastery as jeweler’s horologists and artists. Cartier's Art Deco period creations took inspiration from Egyptian, Persian, Indian, Chinese and Japanese cultures and motifs. They were highly imaginative and fanciful, using a full arsenal of fine jewels and precious stones. The present lots are cased in rock crystal and agate respectively.

Cartier is the master of shaped wristwatches, playing with daring configurations that are now iconic amongst collectors today. From the rectangular Tank and square Santos, to the unique and striking Crash, Cartier has not only mastered shaped watches, but also worked to celebrate their iconic models throughout the years with re-editions.

The Asymétrique is an early triumph in daring shapes. First introduced in 1936, this is the only dress watch to feature an asymmetrical design. Timepieces featuring this angled dial are often racing or aviation watches. The present lot is circa 1938, and a similar piece is depicted in Barraceau, Negnetti & Nencini, Le Temps de Cartier, 1989, p. 211.

In today's secondary market various re-edition models have appeared. The present lot marks a rare occasion of an early and well preserved piece from the original launch of the model.

The present lot is an extraordinary and exemplary example of the U.S. Navy's call to the chronometer watch in the first half of the 20th century. It is even more remarkable to discover this artifact intact today, with a wealth of provenance and history. This Navigator's trio served on one of four US Navy zeppelins, the USS Los Angeles; an incredible aircraft that flew from Friedrichshafen, Germany to New York, US in only 81 hours in 1924.

This trio of watches ranks amongst the finest group of precision watches ever assembled and preserved. There are very few Navigator's Trios known today, and fewer still known to have been used on zeppelins, the world's largest flying machine, and a major asset of the field of aviation.

Patek Philippe
A fine and possibly unique set of three torpedo boat navigator's trio silver open faced watches with power reserve, and original fitted and numbered box, Made in 1912, Sold to the US Navy on 8 December 1917, and used on the US Zeppelin Airship Los Angeles (ZR-3) 百達翡麗 一組三枚 Navigator's Trio 銀製懷錶備動力儲存顯示，附原廠錶盒，錶盒印有編號，1912年製，1917年12月8日售予美國海軍，曾於美國齊柏林飛船洛杉磯號（ZR-3）上使用，可能為孤品
Estimate: 150,000 – 250,000 USD

Prior to 1949, Cloisonné decoration on dials was usually reserved for pocket watches. However, techniques improved to such a degree that they could be fitted to a wristwatch. Each dial was constructed by laying a pattern of thin gold filaments onto the dial. We are pleased to offer two exciting examples with unique provenance. 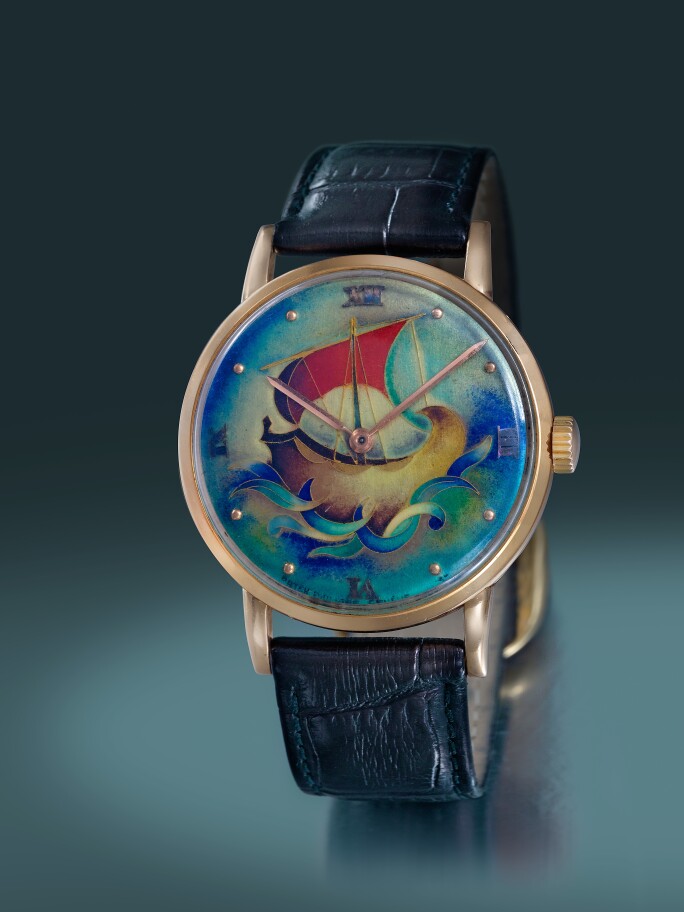 Patek Philippe’s independent dead-beat seconds function was a culmination of nearly a quarter century of research, development and improvement, making this complication exceedingly rare in the firm’s repertoire. The present example is one of only six watches known today featuring this complication with the addition of a minute repeating complication. It is further heightened by a fully chased and engraved hunting case and retailed by F Sauter & Co., Havana Cuba.

Audemars Piguet debuted a line of very limited and rare grand complication wristwatches in the early 2000s. Combining the iconic Royal Oak with the industry's most desired complications in one Grand Complication timepiece. Powered by the firm's incredible in house caliber 2885 composed of 648 individual parts, the timepiece features a split second chronograph, perpetual calendar, and minute repeating along side moon phases and leap year indication. 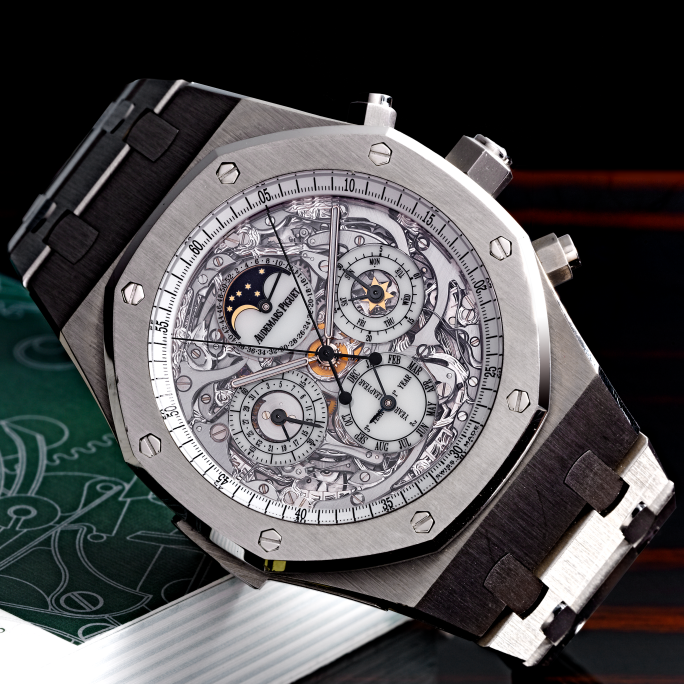 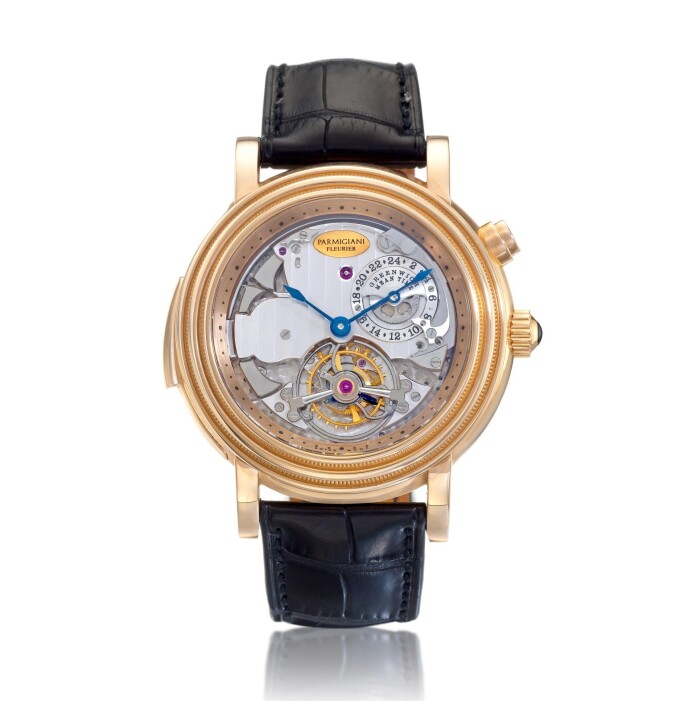 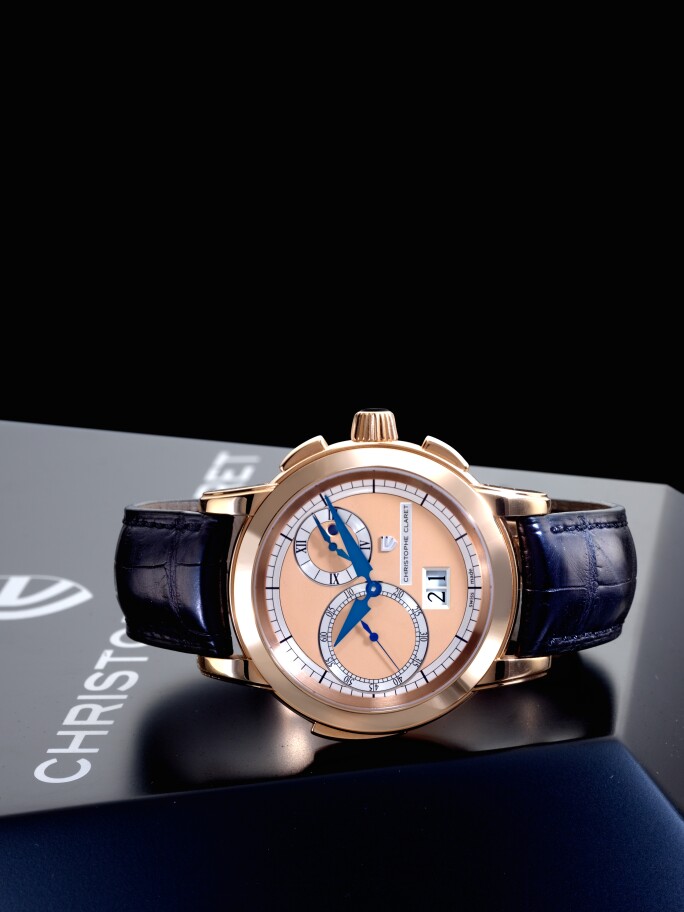 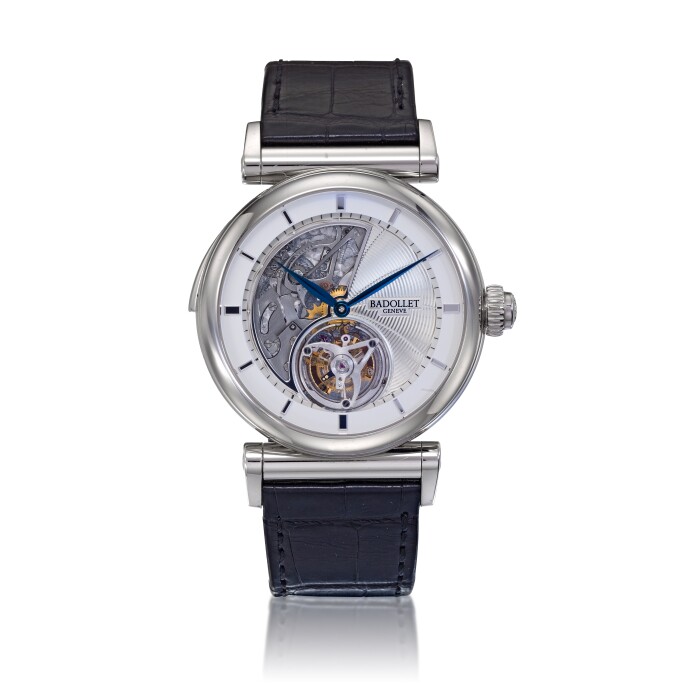 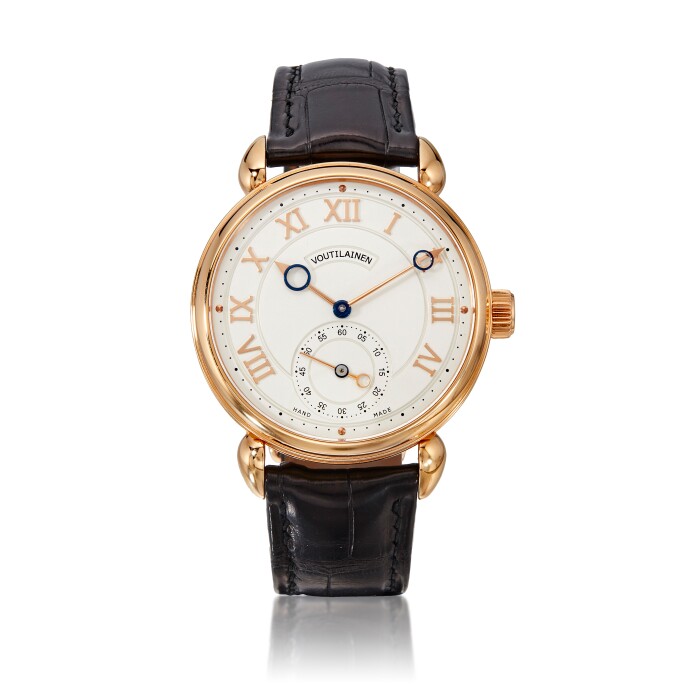