Property from the Estate of Prince Mohammed Tewfik A. Toussoun of Egypt 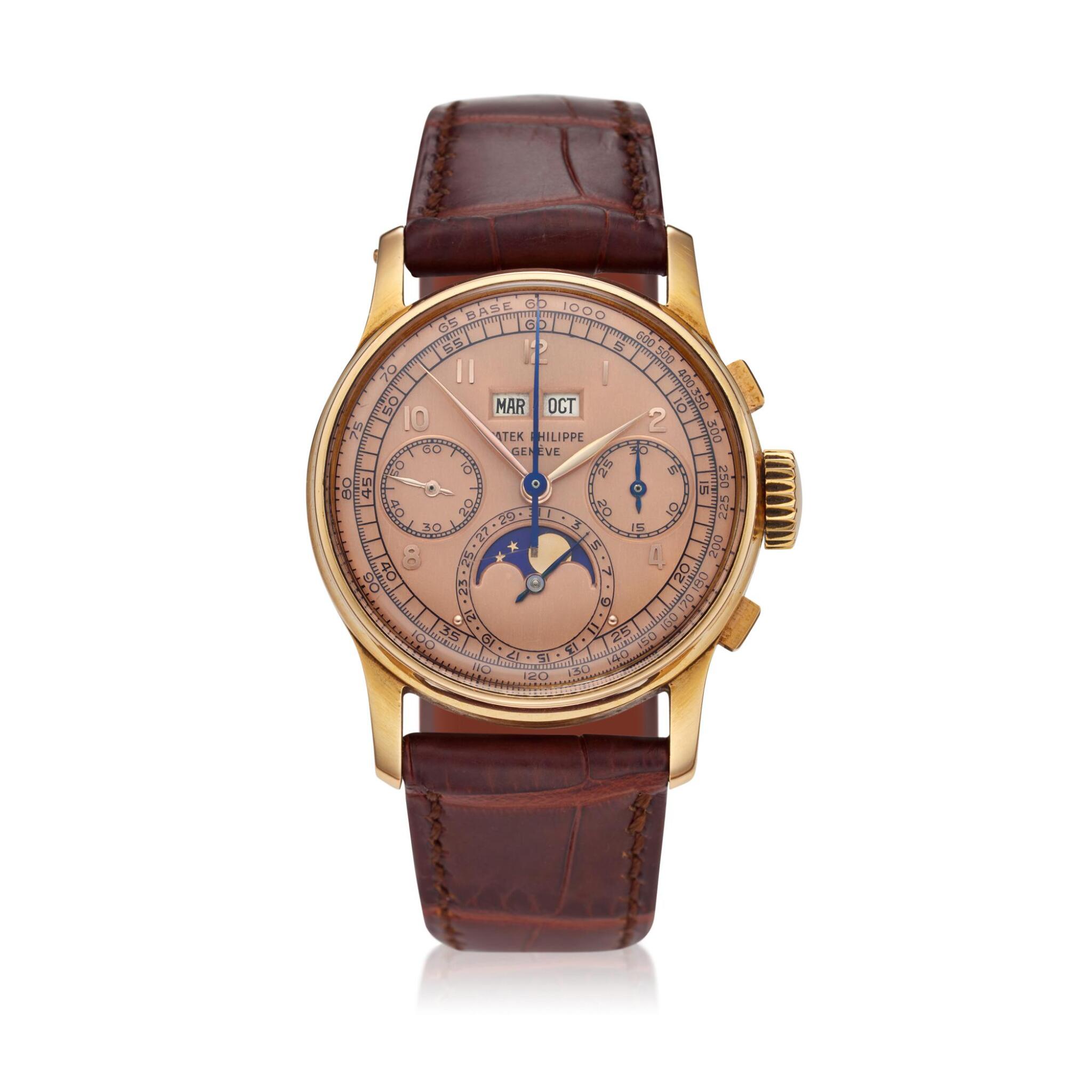 Property from the Estate of Prince Mohammed Tewfik A. Toussoun of Egypt

A pink gold perpetual calendar chronograph wristwatch with moon phases, Made in 1948

Consigned by the family of the original owner, the present watch has never been on the market before and is arguably one of the greatest pink on pink reference 1518's to have ever surfaced. It is the only known pink 1518 to retain its original certificate. The watch has seldom been used and the case is in unpolished condition, still retaining its original factory finishes. There is a very crisp hallmark on the band at 10 o'clock, and a second hallmark underneath the bottom right lug.

The dial is in excellent condition with hard enamel scales all nicely raised. It has never received any cosmetic intervention. The crown is original. There is some minor tarnishing to the day and month calendar wheels. There is some minor dirt in between the lugs and pushers. Overall, the watch is exceptional in every way.

Patek Philippe’s entire lineage of perpetual calendar chronographs starts with the reference 1518 launched in 1941, World War II at the Swiss Watch Fair in Basel. The reference was not only Patek Philippe’s first serially produced perpetual calendar chronograph wristwatch, but the first of its kind from any brand, earning the reference its well-deserved place in horological history and setting the standard of haute horology for the decades to come.

In accordance with period tastes, Patek Philippe cased the majority of the 281 total examples of the reference in yellow gold, while only 58 examples believed to have been cased in pink gold. Of these 58 examples, an exceedingly scarce few were configured like the current example. When cased in pink gold, the reference was most commonly fitted with silvered dials, with only a select few wearing matching pink dials. The end result of this subtle adjustment is a warm attractive aesthetic, unique to this variant. To date, the market has seen only 13 of these ‘pink on pink’ examples, this becoming the 14th. known.

As might be expected, the reference 1518's significance and renown was not lost on collectors throughout history, with the world’s most important collectors as owners including Henry Graves Jr and celebrities such as Sugar Ray Robinson. The references association with royalty has been well established too, with owners including the former ruler of Romania, King Michael I, the King of Jordan, and Egypt’s penultimate ruler King Farouk I.

Coming directly from the family of the original owner, the current example of Patek Philippe’s legendary reference 1518 perpetual calendar chronograph was purchased by Prince Tewfik Adil “T.A.” Toussoun of Egypt on the 20th July 1951. Born on April 18, 1925 into Egyptian royalty in Cairo, Prince Tewfik was a direct descendent of Mohamed Ali (4 March 1769 – 2 August 1849) considered the founder of modern Egypt, first cousin to Egypt’s tenth and penultimate King of Egypt, King Farouk I.

The Prince departed the country in 1947 prior to the Egyptian Revolution of 1952. His early childhood was spent in France under the supervision of his grandparents Tewfik Pasha (‘Tawfiq of Egypt’, 6th ruler of Egypt) and Princess Fatma Ismail before moving to the USA initially to study agriculture with the expectation of the inheritance of significant land in Egypt. Post revolution, the Prince decided on a life in academia, firstly at Cornell University, followed by (UC) Berkeley and finally as Emeritus Professor Pennsylvania State. Retiring to California in 2005 to be with his close family and his beloved stepchildren, the Prince’s Patek Phillippe remained in his sole possession thought out his life.

Remarkably well-preserved examples of the legendary reference rarely come to market. Having spent the majority of its life in a safety deposit box where it was discovered on the Prince’s passing, its case made by Emile Vichet, remains unpolished condition and with its hallmarks and original brushing marks still prominently visible. The case and lug proportions remain almost exactly as they would have been in 1951. The beautiful warm copper pink dial remains in remarkable and unblemished condition, completely original, and free of any large flaws or evidence of cleaning, with the signature and scales perfectly preserved in their original raised black enamel.

Given the iconic and historic nature of the reference 1518, the offering of this example in such outstanding and extraordinary condition and with Egyptian royal provenance presents a unique opportunity for any collector to acquire Patek Philippe’s first perpetual calendar chronograph wristwatch in a state near to that of when it was fresh from the factory.

Testament to the care and love Prince Tewfik had for his extraordinary watch is the fact that he retained the original Certificate of Origin, Operating Instructions and its box, all in immaculate condition for his entire life. This original Certificate of Origin from Patek Philippe is dated July 25th, 1951 as the date of purchase, confirmed on the extract from the archives. Scholarship suggests that this is the only pink on pink reference 1518 to be offered with its original certificate of origin. Taking all factors into consideration, it wouldn’t be an overstatement to deem this a true museum worthy timepiece. For this we have to thank the extreme care and infrequency of handling which defined the Egyptian Prince’s lifelong ownership of this important wristwatch.