T he sale presents a selection of works of art spanning several millennia of Chinese history. Ranging from a collection of archaic jades dating as early as the Neolithic period, to ink paintings by masters of the 20th century, highlights include an impressive Western Zhou archaic bronze ritual vessel, zun, made to contain food offered to the ancestral spirits and placed in high-ranking tombs of the period.

Also offered for sale is a small and exquisite figure of a bodhisattva, beautifully cast in bronze and richly gilt, exemplifying the rise and spread Buddhism in the Six Dynasties period. The pure aesthetics of Tang and Song ceramics are illustrated by fine examples from various private collections. The sale also showcases a small group of porcelains made during the Ming and Qing dynasties for the Chinese and western market as well as modern paintings by renowned artists such as Zhao Shao’ang and Chen Hengke and objects from the scholar’s studio. 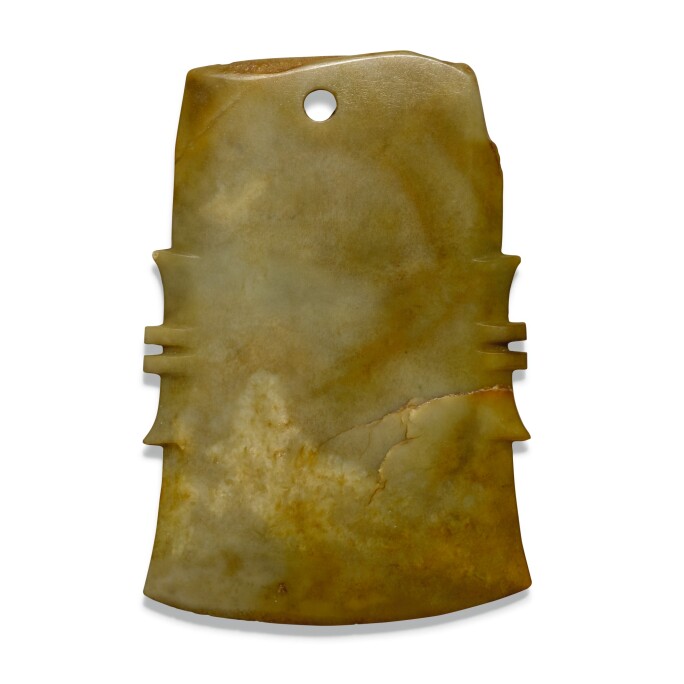 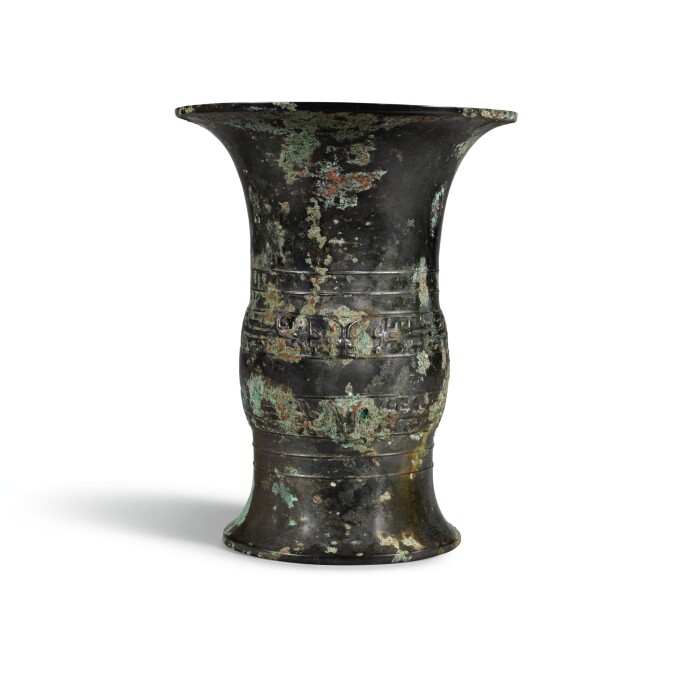 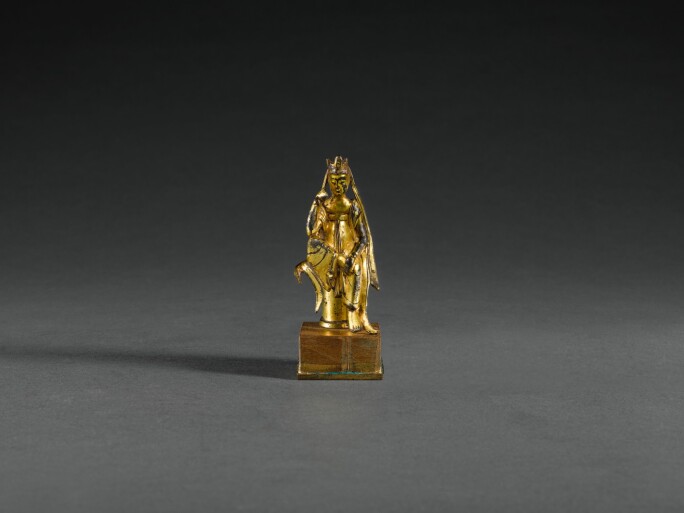 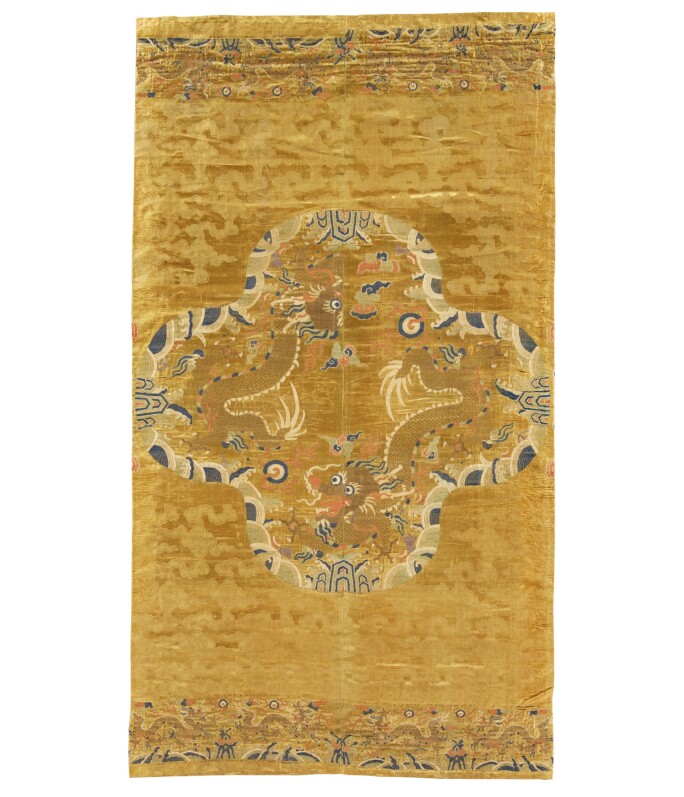 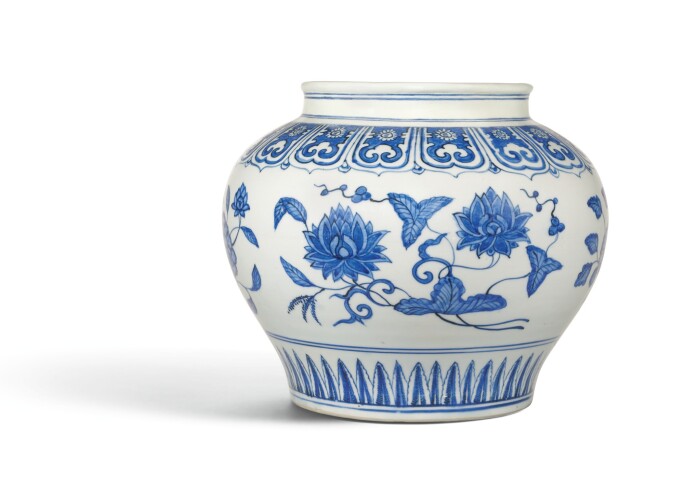 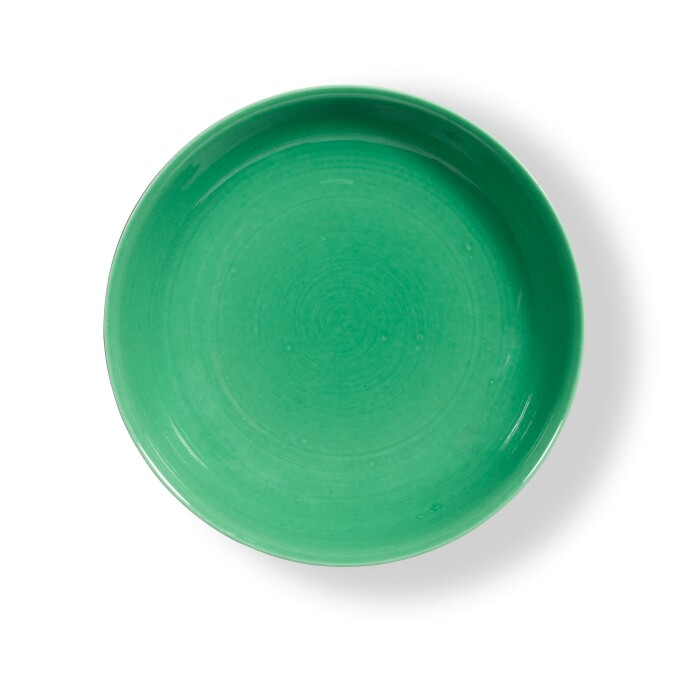 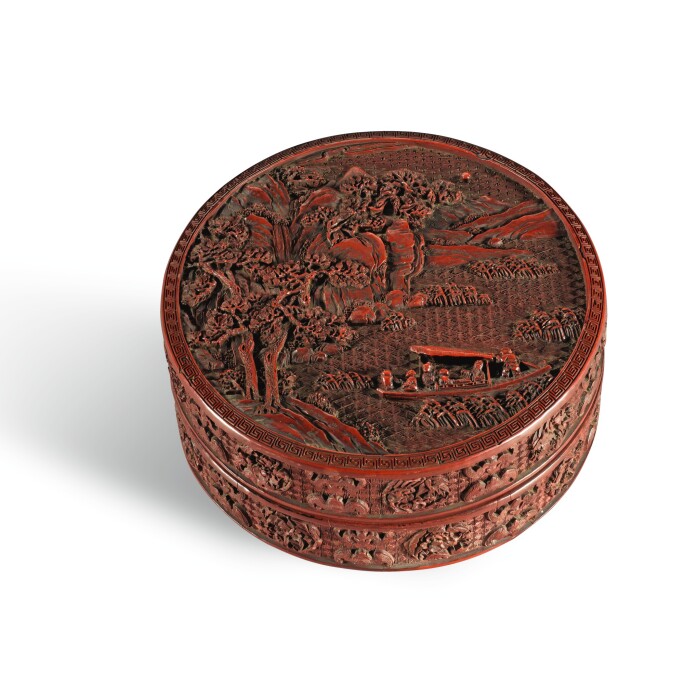 B uddhism originated in north-eastern India where Siddhartha, known in China as Buddha Shakyamuni, was born around 400 BC during a time of great economic, social, and cultural turmoil. Travelling monks may have introduced his teachings to China where its popularity rapidly spread particularly in the North from the 4th century AD onwards, as testified by the many cave-temple sites across Northern China constructed during the Six Dynasties and Tang Periods. Under Imperial patronism Buddhism continued to flourish under the Ming and Qing dynasties as numerous Imperial temples, monasteries and pagodas illustrate.

An exquisitely cast miniature gilt-bronze figure of a pensive bodhisattva made in the 6th century is a rare early example of Buddhist art in China (Lot 23). Not many metal sculptures were made during this period and the small size and quality suggest it was made for personal devotion for a wealthy Buddhist patron. An early Ming lacquer-gilt bronze figure of Buddha Sakyamuni also offered in this sale, testifies to the popularity of Buddhism under the Yongle and Xuande emperors (Lot 24). Finally, a rare woven and embroidered textile depicting the image of Ushnishavijaya made during the late Ming dynasty illustrates that textiles too played an important role in the furnishings of Buddhist temples, halls and pagodas (Lot 26). The small size indicates that it may have been used inside the chapel of a stupa. 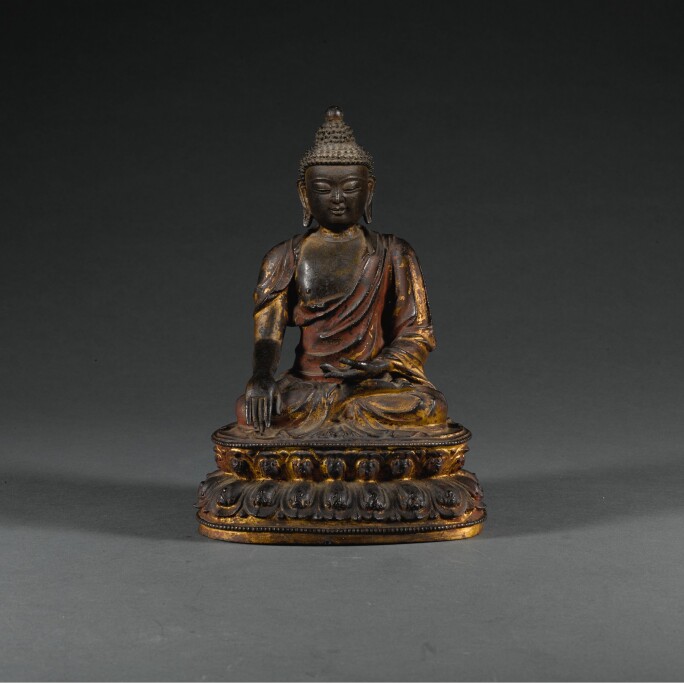 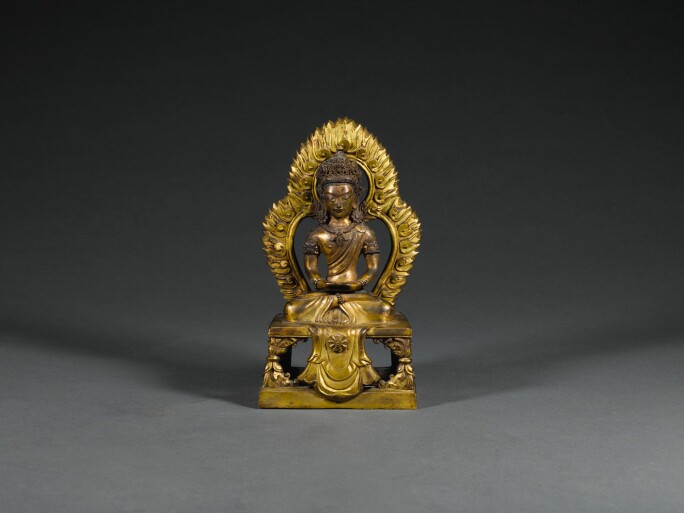 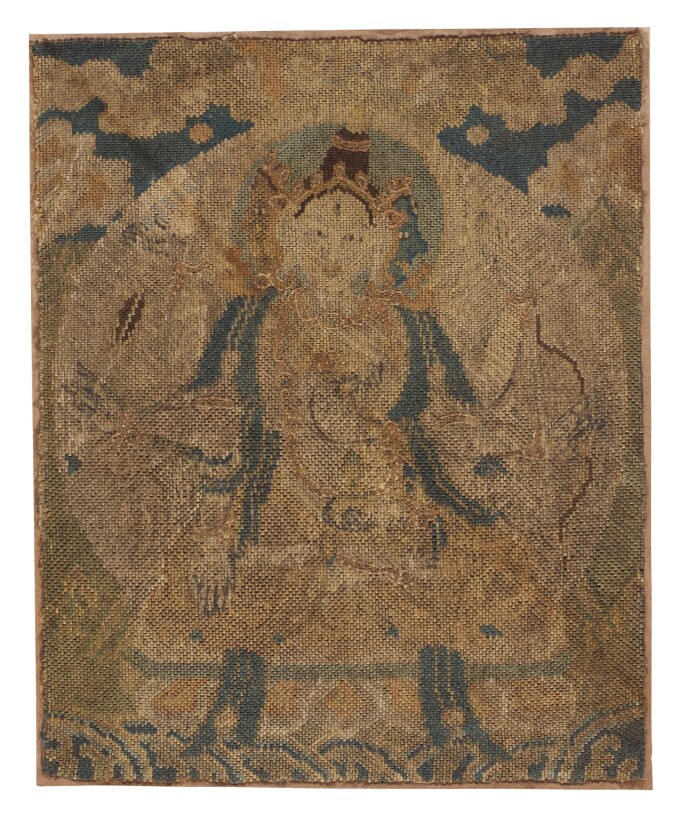 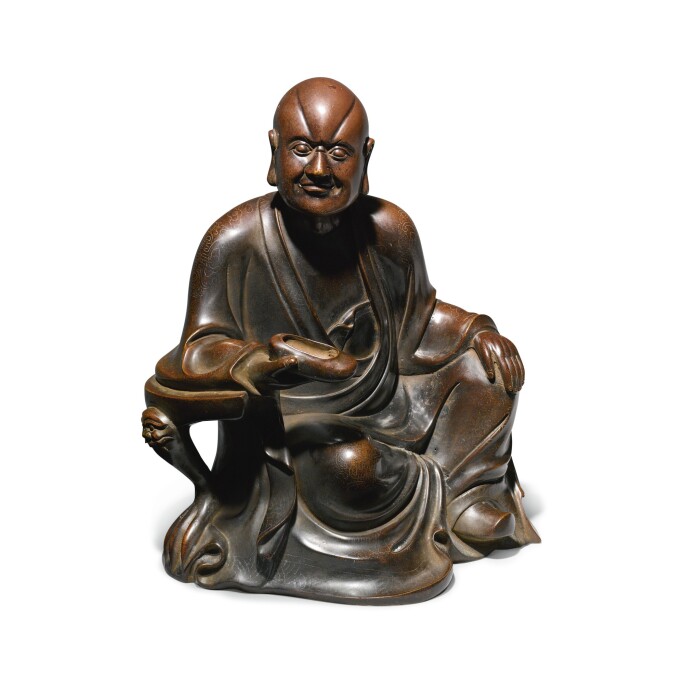 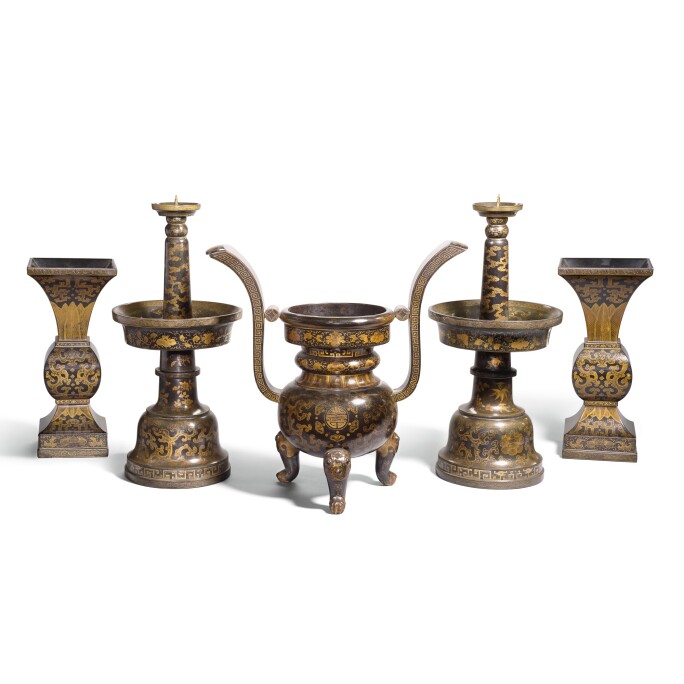 T hroughout Chinese history silk played an important role in politics, trade and culture, being an important commodity and at times a standard medium of exchange. From early on, Chinese artisans developed highly complex techniques for producing elaborate silk fabrics and designs, both in the woven cloth itself and in embellishments worked onto the surface. Silk brocades, weaves with supplementary weft yarns creating complex patterns, were employed in many variations. Kesi, a type of tapestry weave that may have been introduced from Central Asia, came to be highly refined in the works of Chinese weavers of the Song dynasty (960–1279) and later. Embroidered designs, a means of embellishing a woven fabric with many different and often complex stitches made using a threaded needle.

This sale offers a range of textiles made in different designs and techniques for formal, informal and religious use. Among the highlights is a rare large uncut brocade and damask silk formal robe known as mang made during the late Ming dynasty (Lot 27). This type of formal robe was awarded by the emperor to high-ranking courtiers as a reward for exceptional service. As emblems of imperial favour, such robes were highly coveted and few survive, as the majority were buried with their owners. Also made for use at court and possibly for use by the emperor and his family in the late 18th or early 19th century is a large yellow satin panel finely embroidered all over with lotus flowers (Lot 29). The yellow colour of the satin ground suggests that it was made for one of the private rooms of one of the Imperial residences as yellow was a colour reserved for the emperor. Finally, a finely woven silk brocade chair cover illustrates the sophistication of mid-Qing craftsmen (Lot 31). The wonderfully detailed and colorful design represents the highest level of workmanship characteristic of all decorative arts made for the the Imperial household. 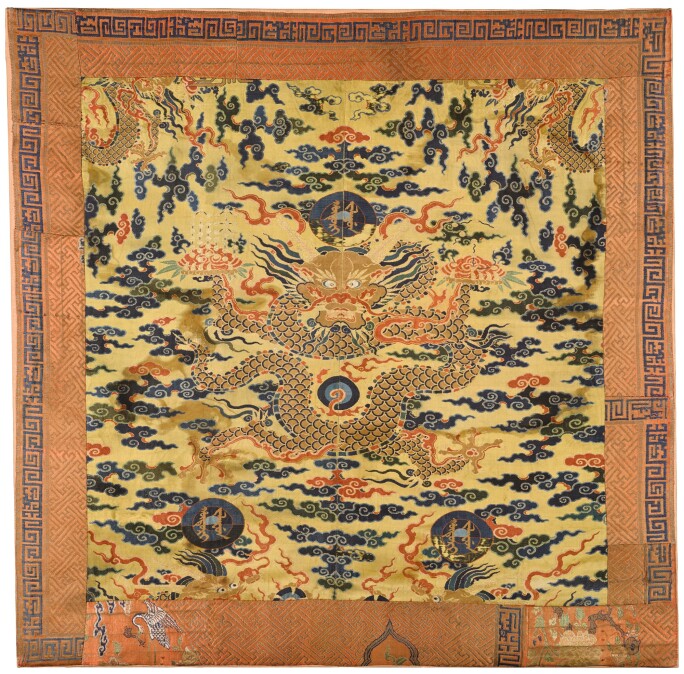 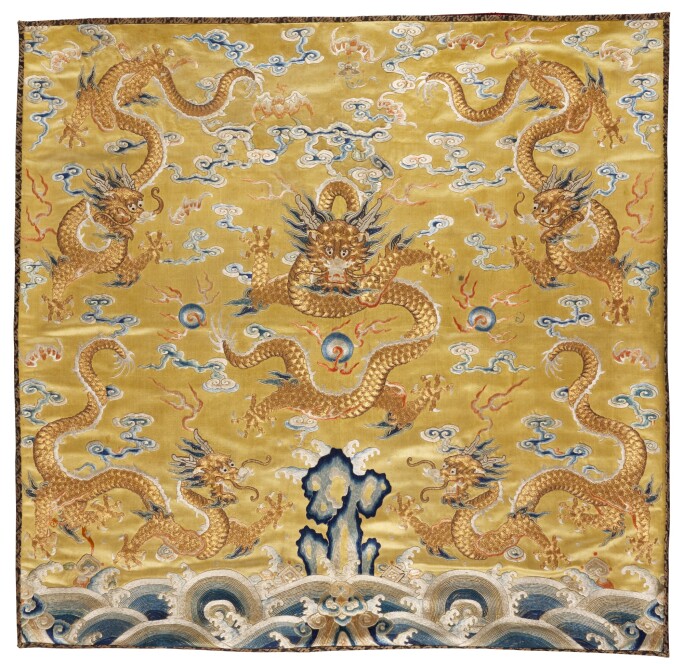 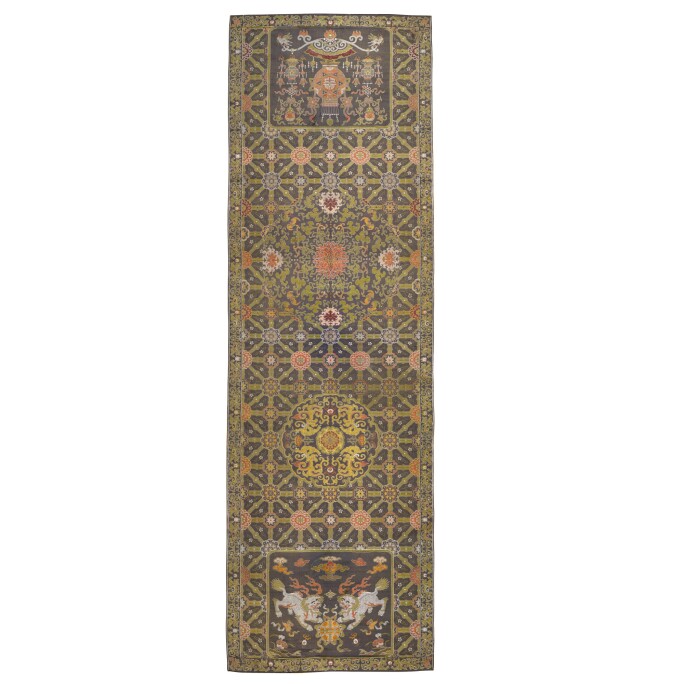 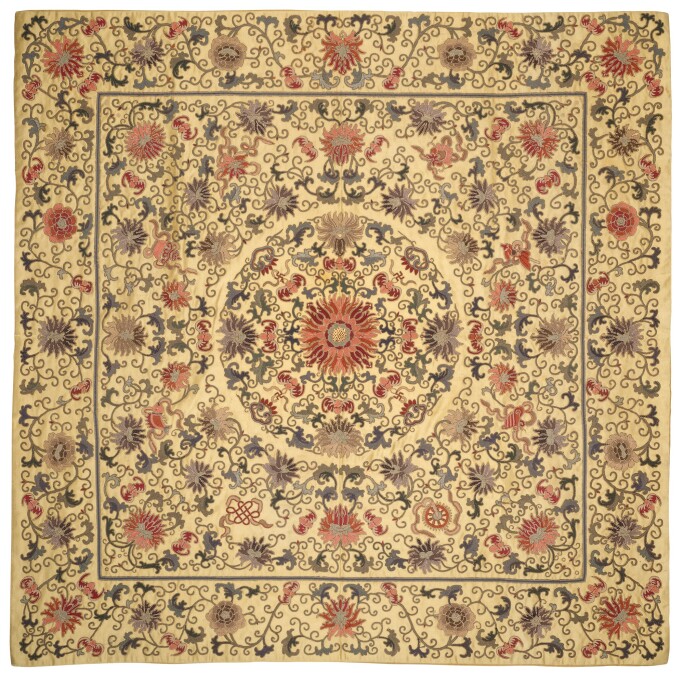 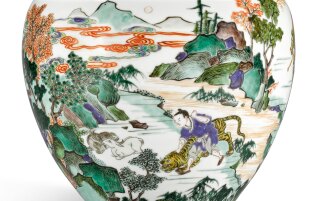 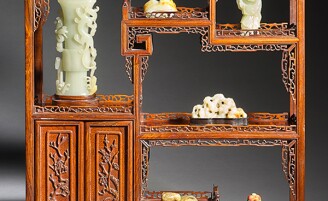