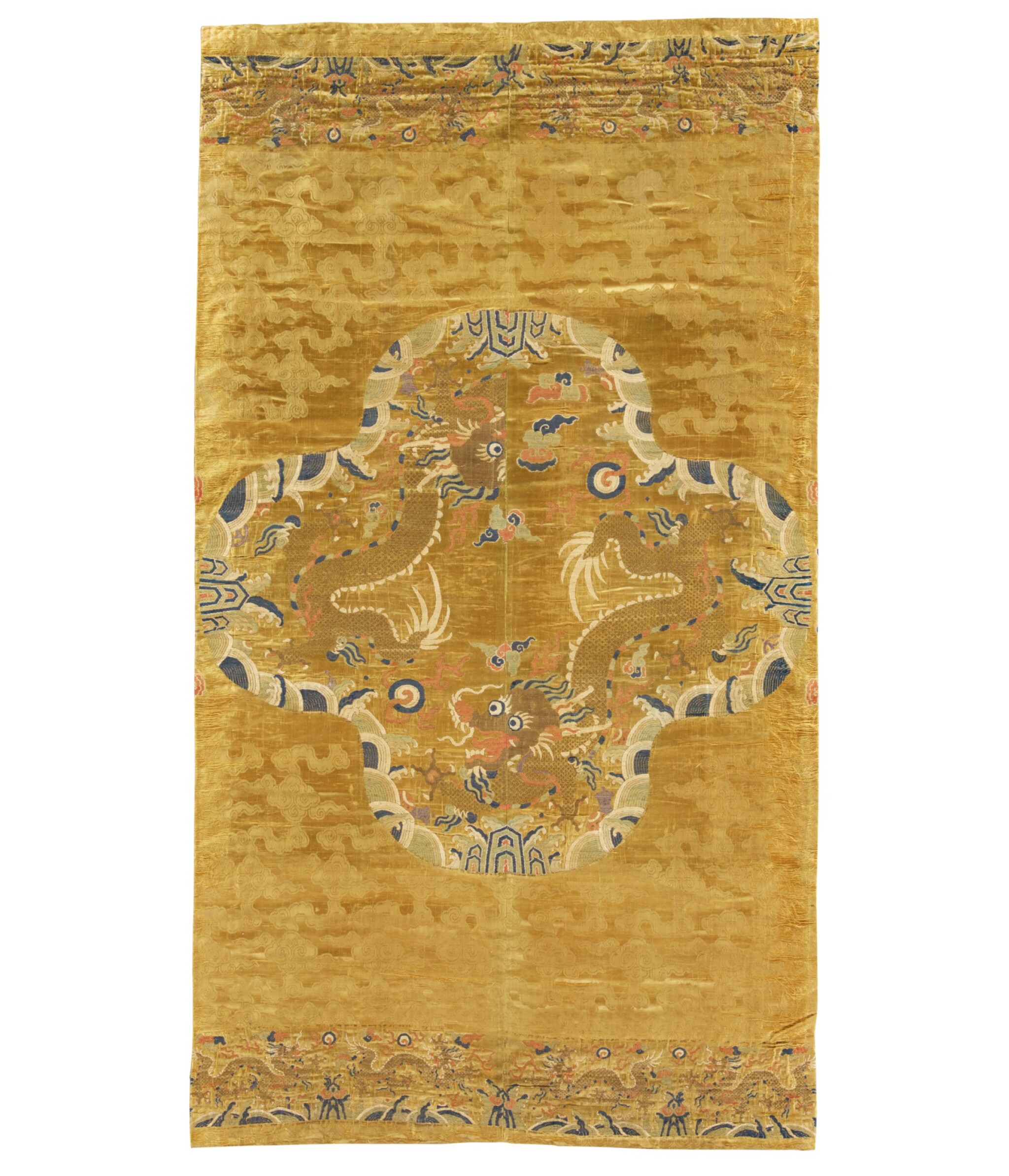 the rectangular panel of uncut yardage finely brocaded in blue, red and gilt-wrapped threads with a pair of four-clawed mang dragons, each in pursuit of a 'flaming pearl' above rolling and cresting waves centrered on towering peaks and amid stylized flame wisps and clouds, within a quatrefoil, flanked by embroidered polychrome clouds and above two narrow bands of four striding dragons, all against a yellow silk damask ground of scrolling clouds

The panel has some fraying to the gold ground, predominantly to the left and right edge.

Please note: Condition 11 of the Conditions of Business for Buyers (Online Only) is not applicable

From the Yuan dynasty onwards, Chinese emperors awarded a specifi type of formal court robes to high-ranking courtiers or foreign dignitaries as rewards for exceptional services. Known as Mang robes, such robes were visible emblems of the imperial favour and were highly coveted.

Under the Yongle emperor (1403-1425) of the Ming dynasty, eunuchs who served as the emperor’s principal attendants were required to wear mang robes. In the mid-15th century it was customary for the chief eunuch to wear a tso-mang or frontal dragon in contrast to the more typical dragons in profile. A particularly coveted type of mang design included the standard dragon yoke collar, but also a narrow band across the knee area with four smaller dragons. In the 16th century officials began placing private orders for mang robes without being formally awarded them by the emperor in direct contravention of a 1459 law. For further discussion of the history and use of mang robes, see Schuyler Cammann, China's Dragon Robes, Chicago, 1952, pp. 10-19.

The present uncut brocade and damask mang robe is among the rare few Ming examples that have survived as the majority were buried with their owners, compare two examples discovered in a Ming tomb of the Zhengde period, published in Textiles and Embroidery: Series of Gems of Beijing Cultural Relics, Beijing, 1999, pls. 35 and 36. A Wanli attribution for the present yardage is supported by comparison with the extensive corpus of robes and yardage found in the tomb of the Wanli emperor in the Dingling Mausoleum, illustrated in Catalogue of Relics from the Dingling Mausoleum, vols. 1 and 2, Beijing, 2006. Compare a very similar rare uncut brocade and damask mang robe of vibrant red colour, also dated to the Wanli period of the Ming dynasty, sold in Sotheby's New York, 21st March 2018, lot 608.