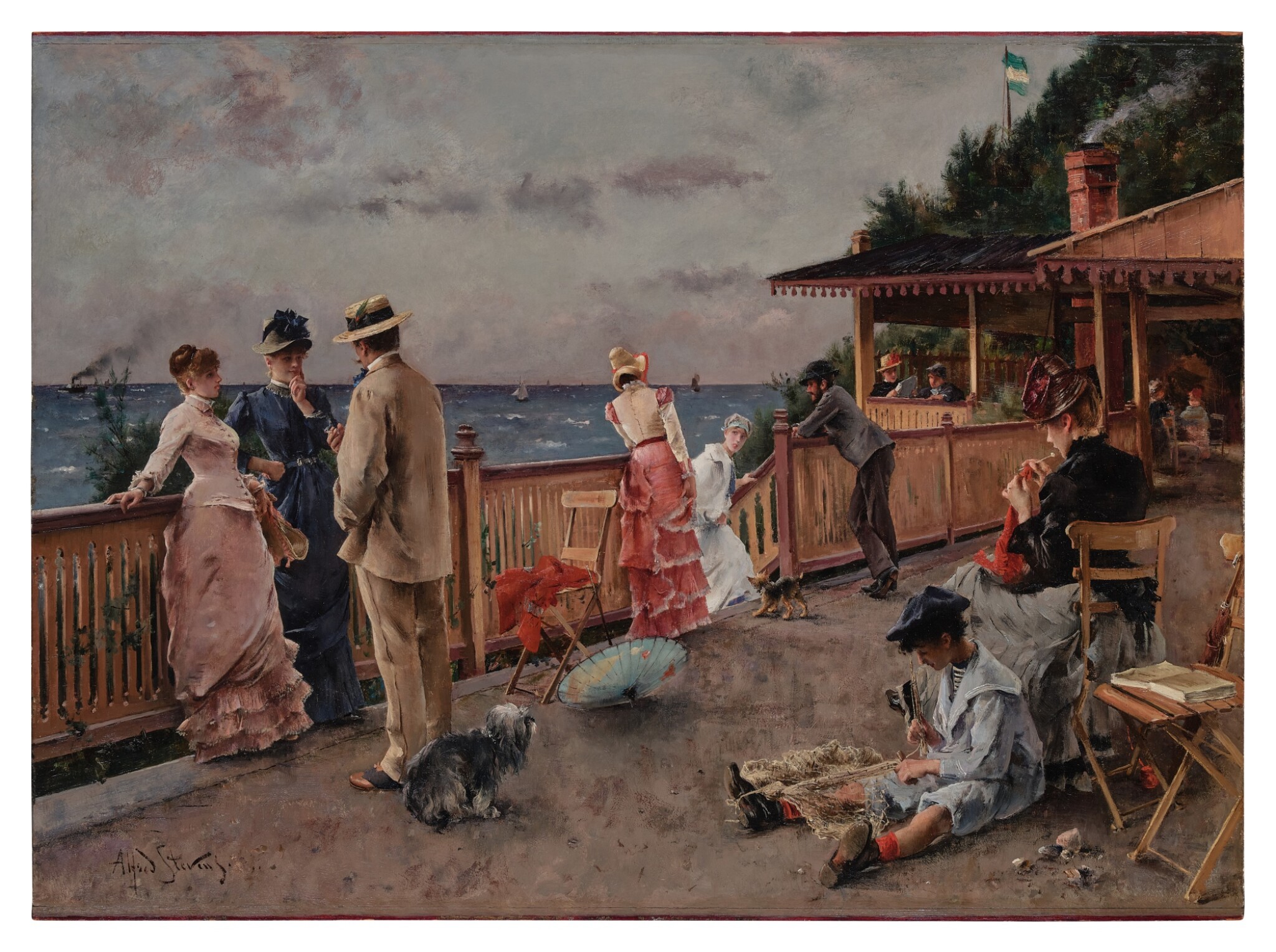 For further information on the condition of this lot please contact Audrey.Brennan@sothebys.com
François Van der Donckt, Sainte Adresse, Belgium (acquired directly from the artist in 1884)
Henri Le Roy et Fils, Brussels, 1885
Braque, Paris, 1895
Ernest Le Roy, Paris, 1895
Gouvert, Paris, 1898
Félix Gérard fils, Paris, 1900
Lons de Fex, Limoges, from 1901-1928
Jean Dieterle, Paris, 1928
Sale: Paris, 8 December 1928, lot 27
M. and Mme. Jules van Hulst, Brussels (by 1935)
Sale: Palais des Beaux-Arts, Brussels, October 8, 1958)
Sale: Sotheby's, New York, 24 October 1996, lot 187
Private Collection, United States
Sale: Sotheby's, New York, 8 November 2012, lot 16
The Artist's "livre de comptes," 1884, no. 450.
Christiane Lefebvre, Alfred Stevens 1823-1906, Paris, 2006, pp. 108-110, illustrated fig. 122.
Gustave von Zype, Les Frères Stevens, Brussels, 1936, p. 102, no. 51.
Brussels, Maison d'Art, Exposition Alfred Stevens, 1895, no. 38
Mulhouse, Exposition de la Société des Amis des Arts, 1899
Paris, École des Beaux-Arts, Exposition de l'oeuvre d'Alfred Stevens, 1900, no. 64
New York, Adam Williams Fine Art, Alfred Stevens- A Loan Exhibition, 2004, no. 20
Brussels, Musées royaux des Beaux-Arts de Belgique; Amsterdam, Van Gogh Museum, Alfred Stevens 1823-1906, May 2009-January 2010, no. 14
La Villa des Falaises à Sainte-Adresse today stands out as one of Alfred Stevens’ greatest achievements, and also perhaps his last major painting. In the ambition of its composition and in the number of figures portrayed, La Villa des Falaises is unique in Stevens’ oeuvre. The subject matter of elegant families in an exclusive seaside setting alludes to the society that Stevens kept and to the emerging concept of leisure in contemporary France; it also neatly bridges his celebrated vocation in Paris as a painter of graceful women in exotic interiors and his later experience of seaside life on the French coast at Normandy and on the Côte d’Azur. The painting was done to order, and had to meet specific requirements regarding content which, it is recorded, tested Stevens’ abilities to the limit. Nonetheless, it was his triumph to carry off the commission with considerable skill and flair and the result is a painting that appears both effortless and spontaneous – as if the disposition of the figures and the demanding perspective had all been overcome in one impassioned session of work. The outcome was a painting that would have struck its new owners as pleasingly modern and, at the same time, wholly in keeping with a rich tradition in French art, that of outdoor scenes of recreation.

La Villa des Falaises was commissioned by the Belgian dealer and collector François van der Donckt, whom Stevens had known since 1866 and who had acquired numerous paintings by him throughout his life; he had lent four to the Historical Exhibition of Belgian Art held in Brussels in 1880 and no fewer than nine significant examples were in the sale of his collection upon his death in 1893. The earliest reference to the present painting is in a letter written at Sainte-Adresse on 28th September 1884 by Stevens to van der Donckt, telling him about a picture he had begun and which another agent (Le Roy) had seen. Future correspondence reveals that towards the end of October, the autumn weather and the sudden absence of any suitable models meant that he would complete the picture back in Paris. After all, he writes: “C’est un tableau important et je pense de premier ordre pour la vente (It’s a major painting and I have high hopes for its sale).” This is a telling remark, because it discloses Stevens’ own financial interest in the eventual sale of the picture: his own ‘livre de compte’ for 1884 records the picture with its title: 12 figures, 2 chiens, vendu à Vander Donckt , partage 12.000 – 6.000. In December that year, Stevens suggests to Le Roy that the painting might make a big impact in the United States, presumably drawing on his past experience of American collectors; William Vanderbilt had paid a massive sum of 50,000 francs for Stevens’ In the Studio.

The sophisticated ‘salons’ which Stevens had known in Paris, and their denizens, are transported to the seaside and "la nature grandiose" in La Villa des Falaises à Sainte-Adresse. The painting’s magic is to combine an unprecedented number of figures and link them convincingly in a challenging, receding composition. Stevens’ draughtsmanship and paint handling remain disciplined and exquisite throughout. The girl climbing the steps onto the terrace seems to entice the viewer into the scene, adding to the mood of liveliness and spontaneity. In the picture are symbols of all that Stevens held dear – ladies, the family, elegance, conversation, conviviality, dogs and, in the Japanese parasol, the exotic.